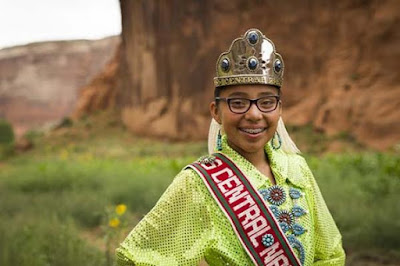 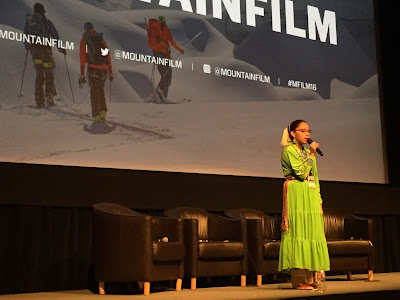 Since I last was able to settle down long enough to write there were the 5 unbelievably spectacular days at the Mountain Films Festival in Telluride, Colorado, and the flight over the Rockies that would serve as the magnificent backdrop to a slice of Life that was magical!

To find myself at 9000 ft. into the clouds with what appeared to be the next generation of world changers was heady and unanticipated in my wildest dreams.  They are physically fit at the highest level -- mountain climbers, mountain bikers, filmmakers, writers, poets, photographers, visual artists, such beautiful human beings of every age (the eldest being Katie Lee at 96!).  I came away with the distinct impression that obesity doesn't exist above 8 thousand feet.

However, among the hundreds (thousands?) in attendance, only two African Americans were visible, though I might surely have missed some.  I remember mentioning to my great travel companion and co-worker, Gretchen, that the last brown face I'd seen was back in the Denver airport!  However, after giving it some thought during a quiet moment between events -- I decided that this was less a case of discrimination based on race, but based clearly on economic factors.  At this altitude and level of existence there were very few white folks and almost no blacks.  Moving around in this world required much more money, varied life experience, and power than  most ordinary folks possess, whatever their race or ethnicity.

Ironically, maybe, the power to meet the huge challenges the world is facing in these troubling times may be largely in the hands of those who gather at such places as Telluride and Aspen because it is they who have the resources, the education, travels to far away places,  and the world experience to be able to lead us toward the answers that must be found if we are to survive an unknown future of unprecedented planetary change.  That may be a scary thought, but maybe this is where we find ourselves at this time on this fragile planet.  Maybe this is the segment of the world population who have evolved to a place where basic needs are being easily met, and they can now afford to take on universal human concerns that those of us who are still at the level of mere survival cannot begin to address.

Those who are homeless rarely experience the wonder of sleeping under brilliant starlit skies of a winter's night, or, are thrilled by a wolf's call in the wild when the choice to be elsewhere does not exist.

I could feel my mind stretching into unfamiliar places with regard to how I see others, and expanding into new complexities and nuances.  It proved impossible to hold to the comfort of political provincialism in that wondrous place among these self-appointed social avatars who are leading the way toward a better world.  This, I shall take down the mountains and into whatever lies ahead. 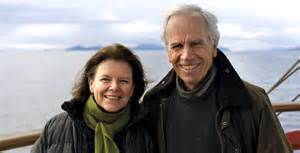 I learned about Chris and the late Doug Tompkins, who, through a vast accumulation of wealth (Esprit and Patagonia), have purchased huge bodies of potential national park lands in Chile and Argentina; scenic lands which they have gifted back to those governments to be kept wild, protected, and preserved into infinity.  And the Tompkins are only two of a number of dedicated  environmentalists whose generosity and hard work to protect and  preserve the planet has enriched us all.

We were present in one of the several venues as a film of the Tompkin's work and a moving tribute to Doug by those who knew and loved them both, was presented one evening ...  His widow, Chris, was a participant in this moving remembrance.

Doug had a history in the Bay Area, and by references during the evening I found myself connecting him with others like Stewart Brand, Hunter Thompson, Wavy Gravy, Peter Coyote, the Grateful Dead, etc., and wondered whether we'd crossed lives at some point -- maybe through Ken Kesey or Paul Sawyer?  The touching would have been mostly at the edges, but quite possible ... .

There is so much more to tell ... but now that I'm home there are important things to do in preparation for packing up to fly off to New Orleans in a few days ... and this will have to be picked up after I've emptied the clothes drier and sorted the next load.