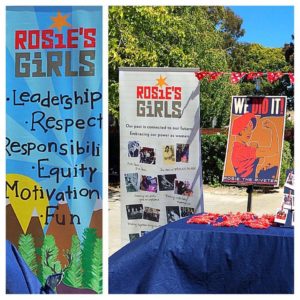 This morning brought another day of filming ... but with a twist ... .

... which required trying to build an information bridge between 30 Rosie's Girls -- a park-sponsored group where the youngest was 10 and the eldest, 14 -- and an elderly woman fast-approaching 96 years of age.  Challenging?  You betcha!  I was terrified at the prospect, the fear that I didn't have the ability to bring their generation together with mine in a coherent way in the sharing of the Home Front history.  How on earth can one do that?  Yet it seemed to work despite the fear.

We gathered at Kennedy High School in a room that probably housed classes in social studies or civics because every available space on the walls was covered with photographs and posters of past national leaders.  Images of Presidents Clinton and Obama dominated the room.  Our sitting president was not represented on these walls, an interesting observation as noted by one of the cameramen.  It would have been interesting to learn whether we'd simply overlooked that image, or, if there were political debates among the students that ended with a conscious decision to allow the omission.  Interesting?

After a brief opening statement about my personal history -- based on a conversation in the car while on the way -- we did a Q&A.  The girls seemed so woefully young, and unknowing, but open and willing to participate as we gathered in chairs that formed a semi-circle with me in the middle.

By the time I felt fully engaged -- about 30-minutes later -- the lights behind their eyes began to slowly shine on, and the room started to come alive for me. 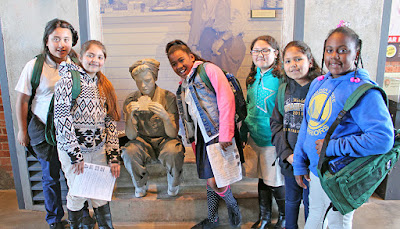 The conversation at times felt far afield from where I thought we should be going, but by the end my feelings of awkwardness had all but vanished, and when our director, Carl, stepped in to remind me that the spread of history that lay between my great-grandmother, Leontine Breaux Allen, and me, might be of interest to these kids.  In the telling of that history, a pathway opens up where the most meaningful part of my story enters, and I'm "at home."

Oddly enough, it is in the telling of that narrative that I feel most "American," because that story places me in the context of one of the nation's most perilous and life-changing times; that of slavery and emancipation.  My enslaved great-grandmother's role in our history may have been involuntary, but the fact that she survived those painful years at a time when education was forbidden meant that she was illiterate.  Schooling was far beyond her reach as both a slave and as a woman.  Yet only one generation later one of her daughters, Alice, would create the first school for colored children in St. James Parish, Louisiana.  Alice served as its principal until her death.  One generation later, a grandson, George Allen, would serve as president of Texas Southern University, one of the nation's historically Black colleges. This surely speaks to her participation as a strong guiding force in her family -- in a fast-changing nation of imperfect folks trying to "get it right."

Through her long lifetime -- she lived to be 102 -- she was able to instill in her 13 children enough ambition, dedication to principle, idealism, and ethical standards that her great-grandchildren, of whom I'm now among the eldest, are still among the nation-builders, in a nation of extraordinary ordinary folks still trying to get it right.

I touched on none of that, but just being reminded of the full story of how much later generations (mine) were enabled by those who lost almost 300 years to the evil institution of slavery in this country continues to allow me to feel the full weight of my citizenship in this still-striving young country ... in my role as a passionate interpreter, a truth-teller, serving in a federal agency, the National Park Service.

This morning gave an indication of just how important my ranger role is in these continuing chaotic times as we continue the process of forming that "... more perfect Union."

As I looked out into those upturned young faces, I could see tomorrow -- though innocence abounds -- but also I could see the openness that is an essential element in creating the future that they will live into ... .

It is such a privilege to be in a position to be able to influence their choices in even these small ways ... like sitting around in a semi-circle sharing history at Kennedy High School in Richmond, California, on this day, July 10, 2017.

We ended with a pledge.


"Every day in every way what I am to be I am now becoming!"

In an odd way, these simple words speak not only to the state of adolescence, but to a young country in progress, as well.

And that, my friends, is an example of the simplicity that comes after complexity!

Posted by Betty Reid Soskin at 1:02 PM No comments: 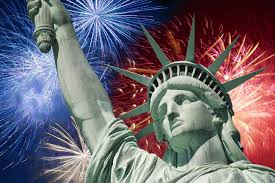 Maybe it was the Fourth of July that created the climate ... .

... or the questions that come up in the Q&A following my talks, but for whatever reason I'm bringing those conversations home at the end of the day, and lingering over them for hours into the night.

My audiences are visibly depressed and are looking for a reason to hope at a time when our nation appears to have lost its way ... or, found new pathways forward in which at least half the country is faltering -- too unsure to trust our institutions for guidance more than for a few hours at a time, or until the next newscast.

Whether by intent or by accident, unlike those audiences, I find myself more hopeful than the headlines might justify.  It's hard to explain, but let me try:

The Revolutionary War of 1776 brought into being our "One nation, indivisible, with liberty and justice for all (some?), and pressed this young country forward into what has become cyclical periods of chaos.  Democracy is not static, but dynamic.  My 95 years have provided enough time to enable me to look back and see the patterns.  I'm now seeing such periods as the times when our democracy is being re-defined; when we're making necessary adjustments in our collective decisions and institutions that will give us a way forward.  It's at such times as these that the reset buttons are revealed, and another round of "the work" can begin.  These are the times of the greatest chance to take whatever steps we must "... in order to form that more perfect Union." Time to "... promote the general welfare". These opportunities rarely occur in times of calm and serenity, if such have ever existed.  These cycles of change are invariably dramatic and fraught with risk.

We're in another of those chaotic periods now, and it's time to roll up our sleeves and get to work building the next platform upon which a new generation of Americans will stand to continue this grand experiment.  Maybe the greatest threat to our governance is the fact that only 17% of those between 18 and 24 turned up to participate in our last election -- when we elected a president with a bit more than 25% of those voting.  Fifty one percent of that vote came from those over 51, presenting an imbalance in governance tilted toward yesterday rather than tomorrow. 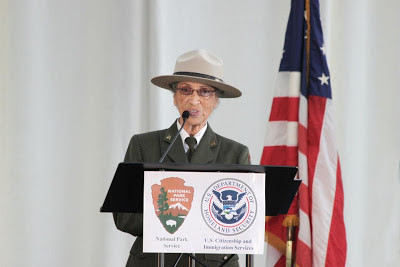 This country started out with those long-revered and imperfect slave-owning Old Dead White Men who probably did the best they could in establishing our Democracy.  From where I find myself these days -- Washington, Jefferson, Hamilton, the Adamses, Madison, Franklin, Paine, et al, --  created out of their chaos of 1776 -- the Declaration of Independence, the Constitution with its durable Bill of Rights that founded this nation-- and given the systemic limitations that gave birth to some fatal flaws -- that brilliant work was probably the best we could get out of the bold leadership of their day.  We're still trying to overcome the contradictions embedded in them, but at least two important questions were answered by the last administration.  Never again will we ask if a woman would ever be allowed to run for the highest office in the land, or, if an African American is capable of being President of this country and Leader of the Free World.  Those discussions are over for all time.  In less than 7 years, a generation of children who lived through the Obama administration and know no other will become voters.  The changes we've been working toward and waiting for have already taken place.

Ever since 1776, each generation has had the responsibility of re-creating the Democracy in its time.  A tall order, that, but necessary if our system of participatory governance is to survive in our day.  We cannot continue to sustain ourselves with a 40% turnout in general elections.  Whether we explain that to ourselves as the result of voter apathy or voter suppression, the result is the same; loss of control of our institutions, and the resulting concentration of power within a chosen few of the privileged. That is  antithetical to the intent so eloquently spelled out in our founding documents.

The Great Experiment is on-going.  Democracy will never stay fixed.  Fortunately for us, there was enough resilience built into the system by those imperfect men that the adjustments needed in light of an ever-changing nation are and have been achieved, but only the dynamism emanating from a passionate and caring electorate will sustain us.

Ultimately, it all depends upon We, the People, and we, too, are imperfect.

I see citizen involvement rising daily among the current electorate with the help of unprecedented access to information, a proven and dependable body of media despite the sensationalists, and many ethical and caring State and National representatives peopling our Halls of Congress. Technological advances are light years beyond where the fertile imaginations of those courageous Fathers of our Country might have taken them.   They could hardly have imagined a nation where their ideas would forever influence a world still yearning to be free in this, the 21st Century.

Why on earth would one not be hopeful?

We need only to look to the upward spiral that defines America to see, albeit dimly, the next steps in our most recent cycle of creative chaos!

This is who we are.

Posted by Betty Reid Soskin at 4:02 PM No comments: