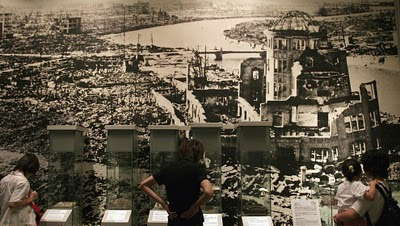 I'm beginning to suspect that a break in my everyday life  might be in order just about now.  I keep reminding myself that I haven't visited Mendocino since that fateful day after Thanksgiving last year.  I do miss those idylls at the ocean; endlessly watching the rhythmic breakers pounding relentlessly against the great rocks... gulls soaring against the approaching fog bank of a soon-to-be night sky ... .  Either I'll escape soon, or a break in my sanity may be just around the corner! I've been under extraordinary stress over the past 10 months -- since Dorian's accident -- and the distraction provided by a very interesting work life may be losing its power to offset the surreal aspects of my daily life.

There is some slippage occurring in my reality, but just when I think I'm losing touch -- the insanity presented on the small screen makes me think that my personal take on the national scene pales in comparison to the unbelievable madness and distortions that are actually reflected there.  Beck-o-mania?

At about ten thirty, by prearrangement, I met a group of about 20 Japanese tourists (students, instructors, elders) and their hosts and translator at the Rosie the Riveter Memorial for a guided tour.  It would be my first experience conducting one with non-English speaking visitors.  Not only that, but dealing with the sensitivity of having visitors who were "the enemy" at the time those home front stories were lived added a new dimension to interpretation.  I've worked that site with Japanese/Americans in the past, but this would be far different.

I found it interesting that an English-speaking Japanese college professor who was traveling with the group whispered as we stood at the plaque of the memorial that described the shameful internment of 120,000 Japanese during WWII -- 70,000 of whom were American citizens -- "there is little about the Japanese American experience taught in our schools. This is new information for us."  It was then that I remembered that the anniversary of the bombing of Nagasaki and Hiroshima had been observed only recently at the sites of the utter destruction by the dropping of the atom bomb, and that, this year, for the first time in history we had sent emissaries to attend those ceremonies.

It was at that moment that I chose to identify myself as an African American, and to speak of then and now in terms of social change.  Chose to say to them that I had been a 20 year-old clerk in a segregated union hall during the years of the infamous relocation, and compared that with a brief description of sitting in awe at the inauguration of the first Black president in January of 2009, therefore subtly indicating how far our nation had come since that ill-conceived relocation edict had been ordered and executed.  It was then that the translator -- in an aside to me -- said, "... we're minorities, too."  It was a moment of reconciliation, a bridge between us.  She was an older woman, too,  an American of Japanese descent and, as such, was perhaps closer to me than to those for whom she was translating.  It was a strange and poignant moment of insight.  Our eyes met in a flash of recognition -- she felt it too; I'm sure of it.

We spent about 45 minutes together, and a warmer more special time I've rarely spent with a tour.  I measured the success of the morning by the fact that several of our younger guests made direct attempts at communicating in halting English; daring to break through the language barrier.  The number of cameras that came out of their cases in a barrage of picture-taking as I was getting into my car was pretty impressive.  Unfortunately, mine proved to have a dead battery so there are no photos to include, though one of the hosts has promised to send copies of her photos and I will add them to this post when they arrive.

.... then I drove away for lunch at the Boilerhouse restaurant in the Ford Building  that would serve as my re-introduction to California College of the Arts President Stephen Beal and to visit with Sanjit Sethi to talk of next spring's commencement and my role in their adventure; maybe to get a better idea of just what it all means;  over the coming months -- what will precede the spring ceremonies?  When will I get to visit their S.F. campus? And how on earth did they come to select me as honoree?

Speaking of madness; would you believe that -- along with about 9 other "Rosies" -- on the evening of September 16th I will be a guest of the management of AT&T baseball park for the Dodgers/Giants game?

I'm considering -- upon the calling out of my name --  running around the bases and maybe sliding into home plate!

Photo:  At the peace memorial completed in Horishima, Japan, in 2005.  Click to enlarge for detail.
Posted by Betty Reid Soskin at 1:41 PM No comments: