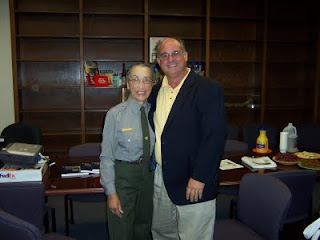 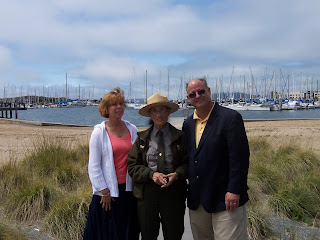 "And the walls came a-tumba-lin' down!"

...and the sun remained in the firmament along with the stars and the moon ... and, despite the brouhaha going on in Cambridge twixt the cop and the professor; the "Twain" has met and it was good!

I suppose that throughout time there have been those who were trying their darndest to "get it right," while the oppositionists flailed and cursed change. Maybe that's who Paul Charbonnet is for me; the one of this generation who has chosen to buck the system, find a corresponding brave soul -- and courageously proceed to break the cycle of alienation that we'd ceased to even be aware of over the decades. What a wonderful man is he! It was love at first sight and I suspect that it was mutual. Both Paul and his warm and welcoming plain-spoken Shirley stepped into my world as if they'd been always standing by waiting in the wings for an invitation. Those Charbonnet genes leapt across the conference room and met in mid-air as if the centuries-old separation of our white and black families had never been. Would that all could find it so easy.

It could not have been a more dramatic opening scene. Wednesday was a day scheduled for one of my "Betty-guided" bus tours of the scattered sites of our park and on my roster were two names that caused my heart to skip -- theirs. The other 14 passengers had no idea what a huge day this was for us. I'd sent a memo around to our staff the day before letting them know how special this tour would be for me, and why.

They arrived at 9:30 from their hotel in San Francisco - having flown from Louisiana to be here. In they walked, the first to arrive for the tour -- and I was hyperventilating wildly! It was hard to allow the enormity of what was happening to sink in at that moment. I had an orientation to present and a tour to run and it was crazy -- we were the Jeffersons and the Hemmings, and all of the great slave family reunions put together, except that none in our Charbonnet family had been enslaved to our knowledge. Slavery would be in my maternal line. My father's family was alienated since the 1830's due to a French Charbonnet male joining with a "woman of color of high-standing" with whom he started our line. It is since that time that we've been two branches -- neither recognizing the other -- at least not officially. In our conversation over lunch we could both recall older members of our families referring to informal relationships that were maintained, mostly through male members. But never overt and probably subject to denial if need be. It was the "southern" way, and time honored in practice.

And -- could it have been a more auspicious day for them to arrive? After the tour Martha and I were scheduled to p 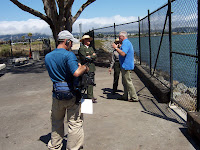 articipate in a PBS program called "California's Gold," and would spend much of the afternoon on camera for a production about the magnificent historic Ford Building, one of the sites incorporated in Rosie the Riveter WWII/Home Front Historic National Park, and the site of the soon-to-be-constructed NPS Visitor's Center. If I wanted to impress, this sure was the way to do so. How's that for drama?

Yesterday the 3 of us met in San Francisco as guests of a young cousin, Jacques, for lunch. Tomorrow evening we'll gather at my apartment in an open house that will allow all the family members who haven't taken off on vacations to meet our cousins. Wish we'd had more time, but this visit was impulsive and unplanned and there wasn't a way to do the appropriate announcement for an occasion as important as this is. But that will come later. If you're a Charbonnet, please register at charbonnetfamily@yahoo.com so that we can grow ourselves into the proud combined American family that we truly are. The process has begun. Add you and yours to the Grand In-Gathering!

Might I add that Paul discovered me on the Internet while searching for documentation for his own family history project? He started reading here earlier this year and (according to his own words), "I've got to meet this woman!" So saying, the story began to unfold and -- here we are -- two direct descendants of two Charbonnet brothers from Thiers, in the Bordeaux region of France, who arrived here in the New World in the mid-1700s, years before the Revolutionary War. Maybe our adventure, joining together as a total family in the new millenium will prove as daring. Maybe not. But however it goes, I feel deep in my heart that it is these symbolic gestures of reaching across the racial divide in love that may save us all.

Welcome into our lives, Paul Charbonnet!
Posted by Betty Reid Soskin at 3:42 PM No comments: