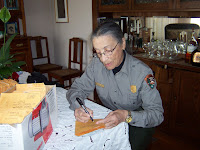 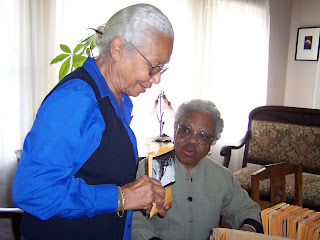 Thursday brings one more day of sleuthing -- wandering through this bonanza of historic photographs of black life in the S.F. Bay Area, 30's through 70's ...

Careth "Diddy" Bomar Reid, Electra Kimble Price, and moi (and others as they join with us) now devote 3 hours each week to excitedly pouring over printouts of old negatives; trying to identify literally thousands of brides, grooms, fraternity sisters and brothers, church goers, choir members, cornerstone layers, debutantes, etc., so that somehow, somewhere we'll begin to make a dent in this priceless collection of images of African Americans who were drawn to life in the Bay Area (mostly) from long before World War II through the Seventies.

What is becoming clear -- at least to me -- is that we're going to have to grow our little group to include more brains with attached active memories if we're going to come anywhere near to accomplishing this task within the next decade! I believe I have some ideas for how to multiply our numbers soon.

Today we came up with the 7th Street office address of the Brotherhood of Sleeping Car Porters; with 8x10 publicity photos of legendary blues singer, Jimmy McCracklin; with a marvelous picture of an event hosted by "100 Black Men" held at Slim Jenkins Lounge in West Oakland; with photos of Mrs. Vivian Osborne Marsh and journalist, Taria Hall Pittman; with the executive board of the Fannie Wall Home & Day Nursery on 8th and Linden; group photos of fraternity and sorority activities, etc. It was another satisfying day, but that's such a small number when one considers that there are more than 10,000 still to be processed! That there will be many WWII home front photos still to be recovered keeps me working breathlessly. The documentation for black history is under our fingers every Thursday from noon until 3:30, and only time (the one thing we don't have) will deliver those identities to us.

Tennyrate, the work and Dorian's balding has dulled the euphoria produced by the billboard announcement, and I'm back in the properly humbled column again. It didn't take much. However -- there were a few moments there -- yesterday -- as I walked across Frank H. Ogawa plaza -- away from a meeting with the director of the Older Americans Day celebration and toward City Hall and a brief meeting with a member of the Oakland city council where we were to talk a bit about historic sites in her district. Four young black men were passing nearby ... and as we crossed paths one of them said, "...she's a park ranger. That must be a great job. And she looks so good in that uniform." They were obviously speaking loudly enough for me to hear. I turned back to them and grinned, saying, "...it is a great job, and thank you kindly, sirs!" Felt good. This was the kind of tribute young black men are so good at delivering. It nudged alive young Betty. But my ego isn't strong enough to warrant such a tribute. It was surely the thought of such a job that rang their bell, right? But for just a minute there ... 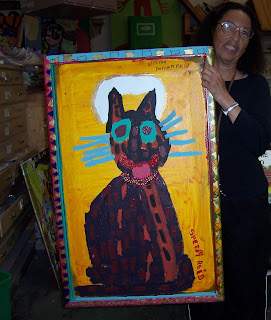 Posted by Betty Reid Soskin at 9:16 PM No comments: 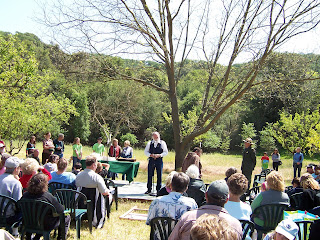 Earthday Birthday with its reminders of the fragility of the planet -- and Dorian's declaration of independence.

Nature could hardly have delivered a more perfect day for hosting an outdoor party for one whom I rarely take the time to think much about. Except for the monthly staff meetings that are held at John Muir National Historic Site -- I have little reason to wander those grounds or to be particularly aware of the Muir legacy. Living in the daily rich environment of the World War II period in Richmond has dulled my senses to the others of the four park consortium with which we're associated. The stories associated with them are varied and fascinating. I tend to think of John Muir only at such times as when I catch sight of the great photographs of Ansel Adams or see a Sierra Club poster. He just doesn't come up for me all that often.

Yesterday our staff from all of the area's national sites gathered in the town of Martinez to join with ecologists, preservationists, living descendants of the Muir clan, civic leaders, park volunteers, and -- the marvelous re-enacter of the great man (pictured above). His brief speech in the burr of Scotland ... after an afternoon of live music chosen for its relevance to his life and times blended with the plaintive sound drifting across the historic orchards from bagpipers in kilts ... a love-ly afternoon spent in the shadow of Muir House.

As an African American with a distinct tendency to view the world from that perspective, it is always startling and disarming to rediscover my country through the lens of other cultures -- other times in history. How rich are we! To feel myself yielding -- leaning in toward the sounds of bagpipes with a faint sense of recognition, somehow, but from where does that come? The sound of drums, surely; but bagpipes? Why, one might wonder, would I think of Hubert Laws playing "Amazing Grace" in that magnificent flute solo -- winding ever higher with each chorus until it sounds reedy and fife-like (bagpipe-like?) whenever I hear that sound. What on earth could be the connection?


Dorian and I have been at odds since my return from the Arizona trip. She had no way to understand where I was for two whole weeks since her perception of distances is not dependable. I've always been within cellphone reach, except for this time when there was no access and I'd dropped off the planet.

Since I've returned she has spent the major part of the weeks sleeping on a futon in my bedroom, only returning to her apartment across town to feed her two cats. I've been dropping her off each morning at NIAD (National Institute for Artists with Disabilities), allowing her to return to her place at 3:00 o'clock when her work day ends, and waiting for her to call to be picked up for dinner and an overnight. I've been waiting for her to voluntarily give up this arrangement and return to living independently again. I couldn't initiate without suggesting rejection. I felt that I had a lot to make up for. Guilt is a powerful motivator, and maternal guilt -- the worst!

On Friday evening -- finally -- she decided to stay at her apartment. I would drive out to have dinner with a friend that evening -- and fulfill my ranger role at John Muir National Historic Site for 3 hours on Saturday with the others. Before I left in the morning she called.

"Mom, I wanted to have a mohawk so I cut off my hair! It came out crooked, so I had to take it all off."

This may be where it was all leading. I now have a completely bald daughter who may have finally been able to express her rage at what she may have concluded was my abandonment. Perhaps now it's over.

It's now Sunday afternoon. She is still at her own apartment, probably a little fearful of having me see the results of her adventure (I was not "cool," guys) and -- frankly -- I'm almost afraid to see her. We'll have to live for months with the shaved head (I believe she used clippers) which means that this may be only the beginning of a major revolt!

Wonder how the great John Muir would hae 'andled this?


Photo: "John Muir" giving his speech just before the cutting of his birthday cakes. Click on thumbnail for full picture.

Posted by Betty Reid Soskin at 2:13 PM No comments: