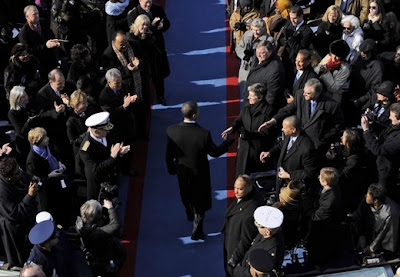 Yes, I'm home again, but only part of me has actually landed. Most of me is still up there hovering in space waiting for the rest of me to catch up!

So much to respond to ... beginning with that really generous featured article in the S.F. Chronicle on the day that we flew off to the Inauguration. Not sure who that 87 year-old Rosie was that he was referring to, but it bore little resemblance to me. I've learned that a 2-hour interview is no guarantee against a good reporter being pressed by the demands of the story that he wants to tell. One tends to become the vehicle against which this can happen, and little more. The woman in his story reads like someone I might like to know, but she and I share little in common.

Let's deal first with that bi-racial label I acquired when I wasn't looking:

I am African American. Some years ago during the Sixties I was "Black" (the non-compromising politics of the times demanded no less), and before that, "Colored." And my New Orleans-born father, Dorson Louis Charbonnet, would insist, "Creole." During the Fifties, there were a few other labels that might have applied, but never in mixed company and not without a whole lot of pain and suffering. But bi-racial never got tacked on for whatever reason. That's new, and never before applied to me, except descriptively and perhaps externally.

We're all going to run into a lot of this stuff because of our new president's rightful claim to that designation, and of the continuing need of folks to categorize by skin color, and that's a conversation we all probably need to have, and maybe now's the time. Reporter Kevin Fagan has provided a great way to do just that. (And I might add that I've never "had to drink from a white's-only water fountain," nor do I recall ever "hearing stories of slave whippings from my great-grandmother," sorry, Kevin. Made for a good story, though.). Funny, I've come to believe that my own extraordinary ordinary story is dramatic enough, and that little embellishment is needed -- but I'm apparently alone in that belief.

First, President Barack Obama's black Kenyan father and white Kansan mother brought together two parents of pure strains which (if we were to apply the theories of the Monk Mendel, the renowned geneticist) would make him truly "bi-racial." The basic theory of Mendelian Law when applied to botany states that the first hybrid is superior to either of the primary subjects. That would mean (if we were talking about roses) that we would have produced a super specimen through such an experiment.

If applied to biology 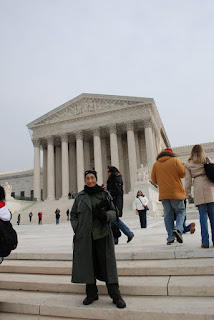 (and this is pure speculation on my part), it might be that President Obama is more than incidentally the remarkable person that he is, or that his ethics, intelligence, morality, compassion and empathy, are not accidental but are inherent in his being. I like that.

The front-page lengthy article that came out on Monday with the headline, "87 year-old Bi-racial Rosie heads for the Inauguration" or words to that effect appeared to be the reporter's attempt at making me more relevant to the story of the day. I consider myself neither a Rosie nor bi-racial, however, except very peripherally. Somewhere, far back in the mid-1800s, that Mendelian link was probably forged and bi-racialism occurred in my Breaux-Charbonnet-Allen family tree. That would have been the result of the African-Creole-Cajun-French-Spanish links (white/black). I'll need to look more closely at that history in order to confirm that for myself. What I do know is that we certainly didn't befoul the human gene pool.

However, by the 15th generation that our huge and multiracial multicultural American family has become, we can no longer be described so simply. If anything we, like millions of people of color in these United States, have become poly-racial, forerunners of what the world's people will someday be in the not so distant future.

And that brings us to two days ago on the Capitol Mall in Washington, D.C. There we had the full spectrum of what America has become over the generations since those founding documents were created by some first class idealists and dreamers whose vision was simply not yet large enough to fully realize the s 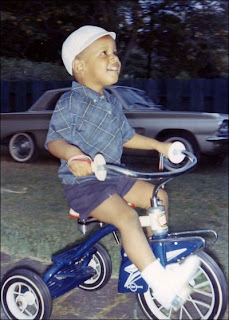 cope of what they'd created. How could they have guessed -- in the days of month's-long sea travel across oceans, that one day mobility created by undreamed of technological achievements that would reduce travel time to hours and days and would have brought new visionairies from faraway places throughout the world to settle in this place -- to continue to build and dream new dreams that would one day extend us into the heavens and beyond!

I felt an undeniable kinship with President Obama when -- in his inaugural speech -- he mentioned that "...60 years ago my own father would have been refused service in the resturants of Washington", and I recognized that -- whatever else one might be said about his bi-racial heritage -- he was one of us, because he'd lived the black experience. It was then that the tears came and the kinship to power reigned down. I searched for my cellphone and connected myself to my children back in Berkeley -- in some magical way -- to extend that power to them, too. And to my great grandmother, Leontine Breaux Allen, whose little picture was in my jacket pocket next to my heart. I knew my family was watching, and the unbelievable reach of technology in our times brought us all together -- I, sitting before the fantastic panorama unfolding before us at the nation's Capitol (in my cold metal folding chair in Section 15) -- and my family back home at the outer edge of the continent on the shores of the Pacific ocean!

My identity as a black woman comes from the fact that (despite my ambiguous skin coloring which might make me appear to be almost anything) I have lived the black experience. That can never be erased, no matter how long I live. But I also suspect that my grandchildren may have lived into an era (as have yours) where that will no longer set them apart or bring them together (I've seen both) -- any more than will Sasha and Malia have need to claim it. The "Black Experience" has some years yet to go before we've grown past it as a nation, but in the meanwhile, it was impossible to walk among those millions of America's new best friends on the Mall, and not feel that we've entered the age of poly-racialism and that we're going to have to find some new ways to discriminate if we're determined to keep alive the embers of inequality that has cursed this nation for so long.

But for now, I remain a product of the "one drop rule" which I cannot shed. I've lived too long and too painfully to allow myself to lose what is my greatest source of pride in these days of racial ambiguity. I've paid my dues to be able to survive on my own terms as a black woman. My children and grandchildren will confront their own times in their own ways. I pray that I've provided them a model of how that might be done, and that -- however they identify -- it will be with pride and dignity.

It's important to me -- in the telling of my own story -- to never forget that on both paternal and maternal lines is the awful reality of slavery. This is an authentic and shameful era of American history that is yet to be fully processed. Using that as a baseline, I can feel the enormous pride of having attained the right to have been witness to the swearing in of the 44th president of these United States in the full realization that my chair was sitting but yards away from the dais -- and upon land which countless slaves had labored without hope of freedom. They'd been hired out by their masters for the building of the magnificent Capitol building and the White House -- the home that our new president and his young family were about to enter in this, his first term as the Leader of the Free World!

As crazy as it sounds, through tears of joy and disbelief, I felt a kinship with this remarkable young man and his family -- knowing somewhere down deep that he will be stretched to the limits of his considerable capacities -- but that his varied background (like my own) has prepared him well for all that lies ahead.

Wish I could put into words my feelings at the visit to the Lincoln Memorial, but maybe by tomorrow the rest of me will have joined the part that landed at SFO yesterday. For right now, I'm still partially "up there" hovering in space-- looking down upon a brand new nation that was reborn on January 20 in this year of 2009. And I was feeling an essential part of humanity -- this time without reservation; only unspeakable pride and joy and such a sense of humility and inadequacy in the face of what is yet to come.

Photo: The little boy who is now the president of the United States of America. Being one of the 2 million stand-ins for the countless others watching and listening throughout the world was an unanticipated thrill of a lifetime. The awareness of that honor was with me every minute.

I'll post my own photos from this historic adventure as soon as I can get them downloaded and posted. Meanwhile, back to unpacking ... .

Posted by Betty Reid Soskin at 12:33 PM No comments: