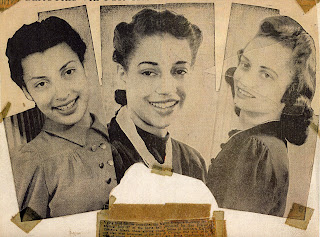 Photo: Me (far left), at the age of 17, with cousins Ruth Warnie and Elaine Allen. The 1938 Exposition, S.F. Treasure Island's world fair was the event. I believe the girl who won the contest (selling the most tickets) would have been below (notice rounded cutout). Photo by E.F.Joseph submitted to a local black newspaper, the California Voice, I believe.
Posted by Betty Reid Soskin at 1:02 PM No comments: