Saw the neurologist today.  He administered the magical Epply maneuver and, voila!  Dizziness disappeared in one fell swoop!

It could not have been more dramatic had the genie stepped out of that bottle and chanted his magic oath.  The cure was immediate.  It took less than 10 minutes, and the world stopped spinning and I came in for a landing.  "Sleep with 3 pillows tonight; about a thirty degree lift to your head, and ... .  " ... If there is any further dizziness, give me a call," says the genie.

I'm not going to let myself wonder why this wasn't done 3 months ago ... but we won't go there.

Blood pressure higher than ever, but it was taken after I'd been through a wild ride through rush hour traffic to the Oakland Medical Center -- and I'm the quintessential passenger-seat-driver -- and it was horrendous!  My son did the honors, but only with invisible help from my imaginary brake pedal.  We were late for my appointment -- and I hate being late -- so it was a perfect storm.

Blood pressure was off the charts upon arrival, and when it was taken again when the doctor had completed his work, it was one point higher!

On the drive home, I was in no better shape, but now I'm aware of an elevated score, so I'm ready to cash in and give up the ghost.  Even silently considered retirement ... .

Within an hour after arriving home my primary physician called to inquire about how my appointment had gone --he was aware of the (alarming) rise in my pressure, and asked me to come in tomorrow at eleven to have it taken again.

I told him that I would need to arrange for a ride (remember, he'd ordered me to give up driving), and you can imagine my surprise when he answered, "... you can drive yourself.  Now that the vertigo and dizziness have been taken care of, there's no reason why you can't do so."

So, I guess I've been reprieved until further notice, and will return to work on Tuesday as planned.

Now I need to seek out a treatment for whiplash!


Posted by Betty Reid Soskin at 6:23 PM No comments:

After 3 months of persistent fluctuating blood pressure, and dizziness caused by the concussion suffered in May, I'm having to face the fact that -- while not yet being advised to retire or to cut back on my work schedule by my doctor -- I have been advised not to drive until further notice.

Tomorrow I will see the neurologist for answers to just what is causing continuing vertigo.  Much will depend upon her findings.

These last two weeks have been spent resting, but on Sunday afternoon I will do my presentation at the Berkeley Main Library.  I'll have a driver.  I'm looking forward to getting back in gear, and on Tuesday will return to my regular 5 day/wk work schedule.

I suppose I should be getting ready to face that "...whatever are we going go do with the old lady" conversation.  Whenever I've asked my supervisors if it's time ...  up 'til now, it has always been, "not yet, Betty."

But the handwriting may be showing up on the wall, though dimly ... .

I've always wondered if I would know when it's time to leave the stage ... maybe I'm beginning to suspect ... .

Whenever the time comes, it will be in the middle of my movie.

Posted by Betty Reid Soskin at 1:26 PM No comments: 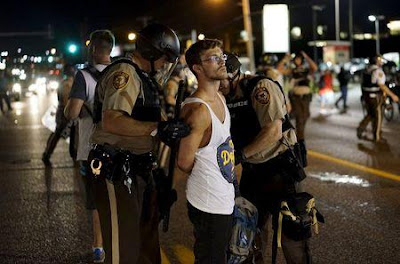 Caught enough of Krasny's Forum show this morning to have it dominate my thoughts over the past hour ... .

The subject was the situation in Ferguson as those old wounds have been reopened, and the violence returned.

Just last night I watched coverage on CNN and learned of the continuing "ticketing for profit" practices that are still going on, adding to the festering of those old wounds.  But I also noticed the presence of a diversity of races on those streets and was reminded ... .

One of the most valuable lessons learned during the earlier versions of the Civil Rights struggles was -- I suppose because I was experiencing those struggles from the position of a middle class black living among enlightened white liberals in an otherwise hostile white community -- down through history there has always been good folks tryin' to get it right, and often at the risk of their own lives.

One might start with the Quakers,  abolitionists, and John Brown.

In this morning's discussion there was a representative of Black Lives Matter -- the current version of the struggle -- and she was articulate, and clearly disheartened by the lack of progress being shown in the clashes between the black community and the police.  She defended the actions at the Bernie Sanders rally, and made the point that in the aftermath he made his first clear statements on the state of the persistent racial problems in the nation.  Attorney Eva Patterson, one of my all-times heroes, was her clear and present -- wise and gracious self -- giving voice to the voiceless.

The call-ins that joined the debate had one thing in common.  They were from people sympathetic to the cause of justice, but clearly expressing concern that the wrong tactics were being used by the Movement ("... why Bernie Sanders, he's one of the good guys'), and suggestions for how it should be done.  May I suggest that all responses -- if coming from a place of moral intent -- are needed.   There is not one correct way to respond to unreasonable and crippling injustices.  Corrective measures have many faces, and will draw many responses depending upon countless variables.

Maybe it's my age, but I find that my eyes are ever searching the television coverage for the racial makeup of the street demonstrations.  I see hope in the fact that the diversity is growing, and that here are the folks who, historically, have always been "tryin' to get it right," and in the chaos there is a lot of democracy being built.  There always is at such times.

Democracy is a process, and every citizen has the right and responsibility to participate in that
process in order to actualize it and keep it vibrant for the next generation.

That can be ugly at times if we neglect our duty to maintain an informed electorate, but it is the price we pay for freedom.

Building and keeping a coalition of those "tryin' to get it right" is of critical importance.  Our black lives may well depend upon it.

We cannot do it alone.  It is an American problem fueled by white supremacy, but mistakenly seen as a problem based purely in black inadequacy and criminality.  Until we recognize it for what it is, we'll continue to fail to find answers.

If my Sixties experiences have any validity at all, then I have to believe that those racially-diverse street demonstrators are doing the right thing by simply being there together showing that Black Lives Matter for the nation and the world to see.