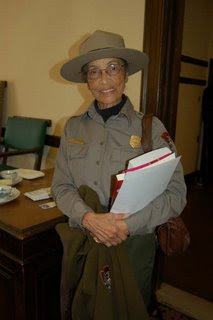 Here I sit ... properly uniformed and more than an hour too early to leave
for the Rockridge Library ... .

At two o'clock I'm scheduled to speak before an audience of the San Francisco Bay Area's activist feminists. I need to climb into my Rosie the Riveter persona and talk about the role of women of color on the home front during WWII. Me. Betty the file clerk who never saw a ship!

In order to prepare for today as well as the next several weeks of role-playing, I've been reading feminist literature well into the night (Emily Yellin, Gretchen Lemke-Santangelo, Karen Anderson). Somewhere along the line I've come to the conclusion that -- whether or not I felt worthy of the attention -- a soapbox has been created upon which I now stand. I can turn away, or, I can use the power to make a statement for at least some of us. It's all so subjective. There is no way to speak for a generation. And -- I have the uncomfortable feeling that I'm only here by default -- having outlived most of those other voices.

It brought to mind something I'd not thought about in years:

It was in the Sixties. The drums of the coming Civil Rights Movement were easily heard by those who knew what to listen for. The McCarthy Un-American Activities Committee was meeting in San Francisco. There were demonstrations everywhere and the one on Cadillac Row was most often in the news. There were many African Americans seen on the daily television news.

We were living then in the suburbs (all-white) and I found myself -- in my liberal Unitarian- Universalist community -- being constantly asked to explain it all. At first it puzzled me. I knew no more than what I read in the daily newspapers; as they did.

One day I drove to the church office to talk with Rev. Aron Gilmartin (my dear friend) to tell him that I was planning to go to San Francisco that day to join the demonstrators. I feared that I might be arrested and that my children and my family wouldn't know where I was. When he asked for my reason I found myself saying, " ... I live out here miles from the scene of the action. I'm being asked everyday for explanations about what's happening by my white suburban friends. If it it I who is being asked the questions, then it is I who must go there and find the answers. This may be the role of a middle-class suburban black citizen. I'm living among those who hold the power to bring the changes being demanded by those who are demonstrating. I need to become informed. No one is going to cede power to a guy with a brick in his hand.

Maybe that's what today is about. My role on the home front effort was barely minimal. Filing change of address cards and collecting dues in a powerless Jim Crow union hall may have been most forgettable - but even there I was an unknowing witness to history being made.

Today the more memorable (white) "Rosies" who actually wielded the rivet guns that built the ships are rare and in many cases, no longer able to participate in such events.

If it is I who hold the power of the soap box -- then (maybe) it is I who should voice that history for those no longer able to; warts and all.

We were a heroic generation of women; and maybe not always for the reasons that history has assigned to us.

Rose this morning after a sleepless night fully intending to go back to re-read some of the lines in those marvelous books that I'd highlighted so carefully in preparation.

Instead I came into my den -- turned on my computer -- clicked into one of my favorite sites -- online Solitaire -- and have been playing for all of the hours since!

Now it's nearing one o'clock and I'm back at my keyboard gathering my thoughts -- and feeling overwhelmed but ready to set out into another rainy day ...

Maybe all I need to do is tap into whatever is waiting behind my eyes ... 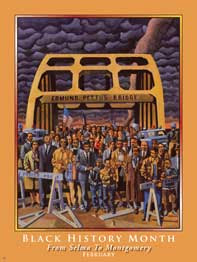 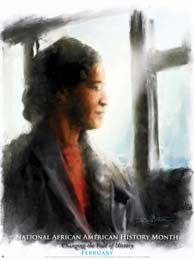 Posted by Betty Reid Soskin at 7:59 PM No comments: