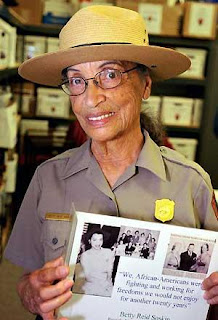 Just returned from another of our wildly successful NPS bus tours ...

Today's was another in a yearlong series of bus tours that began as an experiment designed to involve the Richmond community in park-building with us. Unlike other national parks, Rosie the Riveter is situated on scattered sites throughout the city, and where the NPS owns little or nothing. There are no scenics falls or canyons, no Mt. Rushmores or Old Faithfuls or Civil War Battlefields, or parades of statuary on the Capitol Mall. The area was congressionally designated without precise boundaries. We do have the Rosie Memorial at the shoreline which was its genesis. We're defined by rusting still-existing structures from the World War II period that are privately-owned or are the property of the Redevelopment Agency, the City of Richmond, or organizations that purchased them to be adapted for other more current uses. Therefore, with a variety of partners -- we're co-creating a new national park -- and making it up as we go along. I don't remember ever a time or project that created more interest -- either in me -- or in those who are sharing the adventure with us. Little-by-little, this park is being defined by the human stories it is yielding -- with the structures, the shipyards, SS Red Oak Victory, the Kaiser Permanente and Maritime housing, the beautiful Ford Assembly Building (and the site -- eventually -- of our Reception Center), medical facilities, and prefabrication sites providing the background to those stories.

It is all so fluid at this point that it's is hard to see what form it will eventually take, which makes it all the more exciting. We're building ourselves a national park and you can feel the excitement as it unfolds and takes shape before our eyes with each of these trips into the past.

We're still in the process of identifying those relevant sites that are scattered throughout the city, and in order to do that, we invite groups of folks to board our small bus (18-passengers), and for 3 hours follow a guided tour during which (if we're lucky) our "tourists" slowly become participants in the re-living of the story of the Home Front experience from as many angles as there are people on the bus. The experience is astounding!

The fact that we're re-living times that were triumphant when viewed from the perspective of the progress made in the shipbuilding industry; times that were excruciatingly painful for the black community that entered into one of the greatest migration stories in our nation's history; a time so devastating for the Japanese-Americans shamefully interned in relocation centers for the duration; and a time that was so freeing to the women who were entering the nation's work force for the first time ... with each bus load carrying at least a few who lived some parts of those stories. Layer-upon-layer we've been peeling the onion back to a time of unprecedented social change in the nation's history, and doing it honestly, with candor, and without rancor.

Initially, it was my role as a community outreach consultant to create each group by invitation. Over the past year our past and present mayors, city manager, most department heads, some city council members, school teachers, business and professional leaders, church folks, a few teens mixed in with others, elders, all in a healthy mix of races and ethnicities have come along for the ride. There have been to date over two hundred "tourists." At one point in doing my audit I discovered to my joy that exactly 52% of our riders were African American. In lesser numbers were Latinos, with the rest of European descent. But then I was carefully controlling the makeup of the groups -- being careful to have them balanced racially, and in every other way possible. It worked beautifully. But there were some who were missing. We've had few people of Asian ancestry and none of the newer immigrants; the fairly large Sikh community or an equally substantive community of Laotians that arrived in the Bay Area as refugees after the collapse of the Vietnam War. These groups, of course, are a part of the more current migration story -- but perhaps it's too early for that kind of interpretation. We'll have to work on it.

Over the past month, we've opened the tours up to the general public. No more choreographing. Flyers were sent out. Announcements were made through the media, and a great item was published in the local newspaper by one of several reporters who've joined us from time to time. The response was overwhelming, so much so that the six tours (3 each in July and August) were oversubscribed within 4 hours of the article's release. All week I spent much of my day returning telephone calls to would-be "tourists" explaining the dilemma and promising to add their names to a bulging Wait List. But the past two groups have been totally European-American without a single person of color on board. Interesting. But not to worry. We're allowing folks to self-select now and our next scheduled group will be larger (27) and will consist of 10 African American members from Easter Hill United Methodist Church among others, a Japanese American woman from Berkeley, and a family of 3 Chinese-Americans who have history as workers on the Home Front. Another tour in mid-August will have a group of ten African American teens (14-17) from a training program -- with their director who I believe is from Nigeria. It's an exciting thought that those youngsters will be mixed in with a group of racially-mixed adults in order to encourage the direct transmission of that history to occur. The buy-in by the community is showing up in meaningful ways.

How will we deal with the overflow? Our management team has granted us permission to add two more August dates, and in addition, we're graduating from an 18 passenger model rental bus to one that holds 22 -- and for all 5 tours. However, by the time this was accomplished, my Wait List had accumulated an additional 50 names! Groups are now calling to request permission to come with their own bus (public-address-system equipped), and wanting to know if we can provide guides-only? October will see 40 members of the California Pioneers of Santa Clara County (esta. 1875) touring the still-forming Rosie the Riveter World War II/Home Front Historical National Park with two guides (I'm one) at the helm. Another group of 24 from San Francisco called to ask if we could meet them at the local Bay Area Rapid District (BART) because they like to use public transit when possible... .

And tomorrow's *West County Times Sunday edition is doing a feature story on the park and our tours and then the carefully adjusted expanded system will crash!

Come the last weekend in September we will be hosting with partners (Chamber of Commerce, the City of Richmond, and others) the 1st Annual two-day Home Front Festival. Save the date. And -- only after that date -- after October 1st -- we'll resume public bus tours and, hopefully, we'll have gained control over our popularity and the growing enthusiasm of our audience!

Posted by Betty Reid Soskin at 2:26 PM No comments: 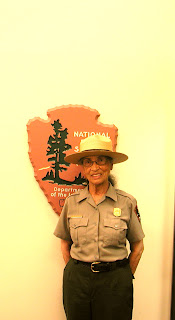 ... and here it was. Betty the Old with Betty the Contemporary, and both awed by the wonder of it all ... .
Posted by Betty Reid Soskin at 12:02 PM No comments: