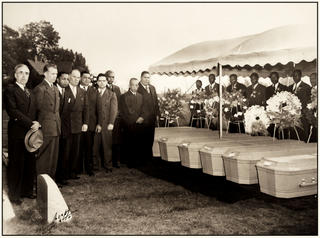 -- not because I'm either too busy -- or, that I've nothing pressing to share, but because so much is going on in my head that the opposite of writer's block is occurring. It's a deluge!

Started my new position with the National Park Service and immediately began to change my mindset from one where autonomy had guided my day-to-day worklife to one where I'm now a member of an interdependent team of workers. That's new and will take some shifts in attitude, I think. But it will work. I like the people I'm working with, and the context is relevant to all else in my life. To have the good fortune at this age to be working in a project that celebrates WWII -- the time of my youth -- is an unbelievable gift. The entire context calls upon my memory bank and freshens a part of my life long dormant.

Besides starting the week on the job, I received a call asking if I'd submit a 300-word piece for the Berkeley Daily Planet (due on Thursday). Being surrounded by so much material of the era made it easy to evoke what I needed. The subject was the horrific explosion in 1944 at the Concord Weapons station at Port Chicago, and my recollections of it. That site is now a NPS park site, so there is a connection. The article wrote itself in about ten minutes as I sat at my desk in my new cubicle in the reception center's temporary offices iin City Hall.

Received a copy of the piece today. It was originally intended to be a sidebar to a featured article on the anniversary of that event, but ended up as a guest column. (It can be accessed online at Berkeley Daily Planet then follow the titles on the right side of the website.)

Then there was the Democratic Convention and its marvelous speeches that held me there until late each night. It wasn't simply the convention itself, but I was responding to memories of having participated in Miami as a McGovern delegate for California back in the early 80s(?). I was aware -- not only of what was before me on the small screen -- but of so much that the public has no awareness of. We, the viewing public, witness perhaps half of what is actually happening at the conventions. It is the experience of lifetime, and -- if I had my druthers -- no delegate (except the VIPs) would be allowed to attend more than once. It should be shared by more of we ordinary Americans. There is nothing quite like it.

With all that was stirred up while watching, I found myself making a mental list of what I wanted to write about here, but as the four days evolved -- and as I became more and more caught up in the immediacy -- the memories began to slide away -- back into the past from whence they'd come.

Bill Clinton could not have been better. Despite my now-and-then anger at him for shifting to a Centrist position when I wanted more Left, or, at his crass behavior at the risk of his integrity and/or his presidency, I forgave him all. Having heard him in person as the guest speaker of the School of Journalism at U.C. Berkeley about two years ago, I was fully aware of his charisma. His animal magnetism draws his audience in as no one else in recent memory. His speech was full of good humor and strong support for Kerry. I loved him.

Barack Obama I've only recently become aware of, but what a rising star! I've never been able to warm to Colin Powell; had been exposed to Jesse Jackson up close and personal when acting as a Northern California co-chair for his first run at the presidency; held Al Sharpton in contempt until I saw and heard him speak as a presidential candidate at the California State Convention in Sacramento early in this campaign. His speech was a masterpiece this week in Boston. I'm sure that every black citizen in this country resonated to his words.

Obama brings newness without compromise to black leadership, and talk of his now being included in the presidential lineup next time around (Edwards-Obama, of Obama-Edwards) seems less related to his being African American than to the fact that we may have grown beyond racism to a place where his being bright and attractive and well-educated will have become more the issue. This exciting young man (33) also turns out to have been the first African American Head of the Harvard Law Review. His speech this week was bold, without rancor, and to the point. There is little doubt that he will become a member of the Senate in November. The Republicans seem to be unable to find anyone in Illinois to run against him.

There was so much to excite the work of electing Kerry. Teresa Heinz Kerry turned out to be at the heart of my enthusiasm for his campaign. This was my first exposure to her, and what a great person she turns out to be! Someone mentioned that she will be our first African American First Lady. What a thought! Turns the concept on its head, doesn't it? Means that we may have to de-colorize those labels! It seems ironic when we consider that Obama's father, an immigrant from Kenya, making him clearly African American as well. Old words, new meanings -- maybe a deepening of meaning, as well.

Sometime this weekend, I'll try to write about some of the things of interest that occurred at the Florida Convention. And our balloons and confetti DID come down as intended!