How will I ever catch up with myself? 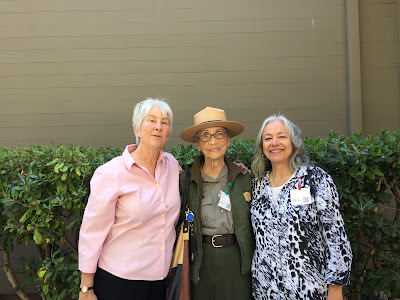 Since the last post so much has happened; including a ten day trip to Washington, D.C., that was jam-packed with events, honors, surprises, etc., with not a minute to waste!

The YouTube Google talk happened on Monday, September 12, in the week prior to our leaving for the grand opening of the National African American Museum of History and Culture on the Capitol Mall.  This architectural wonder sits on a knoll next to the Washington monument and is the most exciting and beautiful addition to the Smithsonian museums that one can imagine!

Prior to leaving with my colleague and travel companion, Kelli English, our staffs here and in Washington had been planning an itinerary that surely have required "Helen," had I been aware of how impressive, how demanding, how intimidating that might be.

It came and went, and both "Helen" and I survived, and were none the worst for wear. 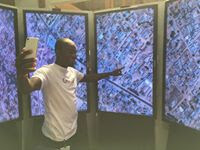 We arrived in D.C. late Thursday evening, and would you believe that I was recognized in the Baggage Claims at Reagan Airport even though not in uniform?  That should have prepared me for the week to come, but I'm suspect that I was still in denial (which I am no longer).

The trip to Google on Monday (just four days before our departure for the Capitol) had been a revelation.  Despite the publicity, I had no idea of the size of the Google campus.  It is like a city within a city, and is all that advance knowledge claimed it to be.

It seemed ironic, however, to note that in preparing for this video in one of their little theaters, 3 techies could not get the main screen to work!  We had to watch the video on a small screen because -- for all their effort -- no success.

During the first part of my talk I found myself disconnected from the audience because -- in order to meet the needs of the film crew -- it was necessary to use lighting that would cause the audience to disappear.  At home, I make certain that all of the house lights are on in our theater so that I can see the faces -- the eyes -- of those to whom I'm speaking; absolutely essential.  I need the connection in order to feel their presence.  Without that visual contact, I'm lost.

I learned in the process (after a few minutes of confusion because of the sense of being blinded and separated from the audience), that it could be overcome.  That I could still hear them stirring.  The stillness, once contact had been made, need not be threatening; and that we soon were caught up in an experience-in-common, and it was alright.  That's good to know.  This will surely happen again, and the next time I'll be prepared for the momentary loss of visual contact.

One of the delights of the Google trip was meeting this young Nigerian intern who has been with Google for about 6 months.  Here he is shown standing before a large Google Map pointing out his home, his school, and the pathway between.  The wonder of how this young man (about 20 years) has bridged the physical,  cultural, and generational distances between is miraculous.  For me it was like stepping into the future only imagined less than 20 years ago.

Wishing for a way to make a Faustian bargain for another ten years or so; at least enough to see into whatever comes next ... .


Posted by Betty Reid Soskin at 3:20 PM No comments:

Posted by Betty Reid Soskin at 2:55 PM No comments: