Thu Mar 8  Commonwealth Club, San Francisco  (not certain when this will be aired)

Mar Thu --       To Portland for presentation at Nike Corporate Offices

Washington through April 14th -- then to NY

April 16, "The Moth" at the Lincoln Center in NY, for NPR (yes, I'm one of the storytellers for broadcast on National Public Radio stations, nationally.

Posted by Betty Reid Soskin at 12:43 PM No comments: 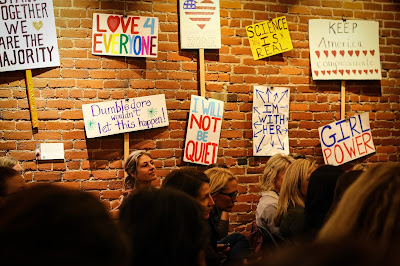 Life has become so complicated that blogging is beginning to fade into the background ... .

... but these postings remain important in my feeble attempts at processing the happenings as they occur -- a necessary element in maintaining even the slightest sense of control over the hours, the days, and whatever there is left of weeks and months to spend.  How ironic that my public life has moved to center stage when it is so late, but then ... .

Spent last weekend in Bend, Oregon, a lovely little city high up in desert country.  This was not the Oregon that I'd imagined; the lush green forested Oregon of the Coast.  Bend is at 4000 ft. where there was once a thriving lumber industry, but now appears to be largely dependent upon the tourist trade.  Became my 6 year-old self while walking from the lovely Oxford Hotel to the conference site 3 blocks away through a snowfall.  What magic!

The World Muse conference of activist young women -- a racially diverse collection of about 300 gathered there for workshops and lectures that were so reminiscent of Esalan with Fritz Perls and Charlotte Selvers et al, Werner Earhardt's EST, Sam Keene's Psychology Today, etc., that I had to keep reminding myself that the year is 2018 and not the Eighties!

Mindfulness has taken the place of the Tibetan concept of Compassion practiced by my husband, Bill, and his cohorts at the University, and it was impossible to escape the feeling that Deja Vu had taken over my life.

Had to keep reminding myself to not express that -- that each generation has the right and the privilege to re-discover its place on those ever uprising rungs on the spiral of change, and that the essence of those uprisings spells the never-ending progress of generations.

It was so obvious that the Women's Movement (Black Lives Matter, TimesUp, MeToo, etc.) has many parts, and that it is an idea whose time has come; that it is being invented -- simultaneously -- in many  places throughout the world by a caring and courageous new generation of young women. 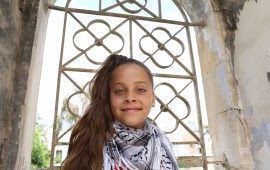 I was asked as a replacement for a brilliant and courageous, Janna, an 11-year-old Palestinian girl who
was invited as presenter.  She was denied entry into our country though her escort, a woman from South Africa, sat across from me at our shared table for dinner the first evening.  Can you imagine how exciting it was to find myself among what clearly are the leaders of the future?

There was a video from Tarana Burke, the African American woman presenter -- the creator the MeTooMovement who'd found herself trapped by the Nor'easter on the East Coast so had her flight cancelled.  Yet, here was I, the on-site Elder for those creating our future for 3 days, and so aware of how precious this was!  After returning home -- watching the Oscars -- there she was on stage with the other movement leaders. 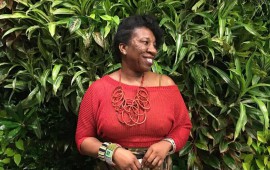 There were a number of Muse members who had shared the Makers experience with me only a few weeks ago, and it was so wonderful to find myself caught up in the sheer exuberance of young women in the process of discovery of their emerging empowerment.  For the first time I find myself seriously considering that Faustian bargain, if offered... (just a few more years, please!)

I remember someone in the Green Room asking if I were nervous just before going onstage.  I thought for a moment and answered, "no, just excited."  It was true.  It also was a reminder that this has been true now for months (years?).  When had the change come?  I wasn't certain, but in thinking about it on the flight home I realized that it is hard to take any of this seriously at my age.  Having lost my sense of "future," it has no place to go.  I'm no longer building a resume.  Everything now is viewed in retrospect; through a rearview mirror.  I'm no longer "becoming," but simply "being."  My view of the world has shifted, so that NOW really is all there is, and that's no longer nervous-making.

Bend was another amazing, awe-inspiring, event that will fill my days with quiet joy into my unknown but ever-exciting whatever days-to-come!

Posted by Betty Reid Soskin at 12:04 PM No comments: