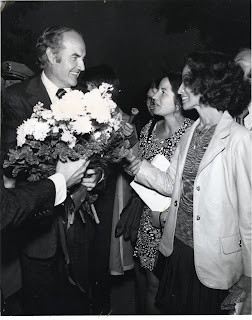 How little we knew ... We believed that world peace was still attainable because we'd finally made the world safe for democracy, hadn't we? How painfully naive was our generation. How fortunate for us that we'd lacked the ability to see into the immediate future so had no idea what awfulness lay ahead for the nation and the world.


It was August of the following year. Dorian had been enrolled in a fine boarding school in Santa Barbara (St. Vincents) and Bill and I were in the Queen Charlotte Islands on a two-month visit to a Haida archaeological excavation. Those beautiful islands belong to British Columbia, and make up an archipelago about a hundred miles out into the Pacific off the southwestern edge of Alaska. They're called, "the Misty Isles." They sit in the warm Japanese current -- fog-bound much of the year so are carpeted in a lush green giant form of velvet moss that covers everything and seems to muffle sound. I remember being told by someone that on occasion one of those large green glass balls used in Japan to weight fishing nets mysteriously washes up on the shores... .

It was from here that we watched President Richard Nixon boarding the helicopter in his farewell to the presidency and public life. We were quietly sipping coffee in a diner near a

small field hospital. We were gathered around a television set with a small group of physicians and nurses on a break ... not far from the Zellerbach paper and giant timber mills. We all watched in silent disbelief. I can remember the feeling of deep embarrassment for my country as the shameful drama unfolded on the small screen there before these stone-faced strangers.

Perhaps, for the first time that I can recall, I was feeling American -- not hyphenated. Perhaps this was true because it was my first experience of being outside our nation's borders and into the world where hyphens were of little meaning. And, oddly enough, under these circumstances, it wasn't a good feeling. And, why on earth would I have been feeling ... what? Guilty? Of what awful crime? I was clearly a participant in whatever shame we were seeing before us; strange and puzzling. I'm not sure that I ever worked that through. But it's clearly related to the feelings I get when newscasters announce "collateral damage," or, "friendly fire, and maybe its simply the price of citizenship; of being a part of the whole. A reminder of the responsibility of being a member of 'community.' Maybe its what drags me out of bed each day - still - to try to "... promote the general welfare in order to form a more perfect union."

The euphoria of Miami felt so far away by then -- but I remembered wondering how different it all might have been ... but it was a part of that kaleidoscopic life that makes up my existence. All of the heady experiences of the convention and its aftermath that had been so hard to crush back into the ordinariness of daily life was by then distant -- unreal -- as if it had never happened at all. Subsequent events tended to erase even the most indelible of memories.

...until these past two weeks as it all came rushing back as though from yester 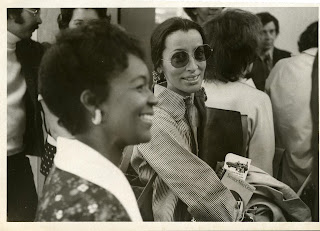 Are we any closer now than before?

Will this new generation of hope and noble aspirations catch the brass ring? Will my progeny get to exist in a world at peace? Will they know that I was one of those who -- in microscopic increments -- helped to move my grain of sand toward the illusive goal of peace in their time?

If I didn't believe in the marrow of my bones that humankind is evolving toward eventual unification I'm not sure I could go on living. But by now I'm too much of a realist to try to envision a world existing in relative peace within my lifetime.


Top left: Presidential Nominee, Senator George McGovern receiving a bouquet from delegate, Betty, for a photo op.
Bottom: Arriving with other delegates at the airport. The California delegation was bused to the Doral Country Club in Miami Beach for the duration of the Convention.

Posted by Betty Reid Soskin at 2:28 PM No comments: