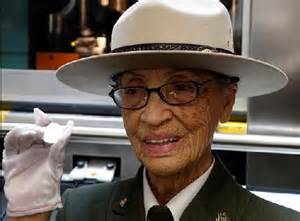 As we entered the US Mint we met security measures unequaled ever before in life ... .

Despite the fact that we were invited guests of their administrators, both in the uniform and badges of the National Park Service, arriving in a fleet van bearing the logo of a federal agency, Tom was required to pop the hood as two security officers went over the vehicle with their wands -- including the interior and the storage areas.   Upon completion of this meticulous inspection (as I waited on a level above after submitting federal smart cards plus California I.D.) a humungous monster contraption that looked like nothing I've ever before seen -- with a great roar was swallowed up by the ground that lay just beyond the reinforced iron gate.  It just rolled away to reveal a flat surface that Tom drove up toward the parking lot above.

I've visited San Quentin Prison, and this display of security made that one look like it was put together by rank amateurs.

We walked into the next level of security, one that resembled those in play at airports nationwide, with the addition that it was necessary that we turn over any coins in our possession.  This meant that I'd have to leave my wallet to be put in a secure place to be retrieved on return.  (Unknowingly, I neglected 3 pennies, 2 dimes, and a quarter in the pocket of my trousers.)

All this had to do with the need to protect the products from being pilfered by visitors -- though this Mint is not open to the public.  Even the employees can only use paper bills to make purchases in the vending machines.  They cannot bring coins of any kind into the building.  Anything brought in unintentionally is confiscated by management, never to be returned. 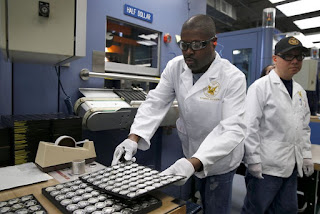 When the ceremonies ended we were taken on a walking tour so that we could see staff at work, and marvel at the robotics, machinery, and processes in operation.  Really interesting stuff!

... but that brings us to an embarrassing and crazy exit!

The last stop was walking back through the security process with several uniformed guards, the trays that hold anything containing metal (rings, watches, belt, badges, etc.,) to be put through the machine that detects such objects.  There's the walk-through structure that is so nervous-making when the bells and whistles go off declaring that you may be smuggling contraband out of the Mint!

It was like a comedy skit.  It took 6 attempts to get through those gates, each time without success ... and those telltale bells and whistles announcing my "crime" attempt each time.  None of us could figure out what was setting off the alarms, but I suspected -- finally -- that it must be the underwires of my bra.  We'd been through what began to resemble a strip tease routine as we discovered those 3 pennies, 2 dimes, and a quarter in my pants pocket, the clasp on my belt loop that held my smart card, my ring, my watch, etc.

It became laughable, and the guards finally just let me pass without incident, and I suspected that we were all caught up in a process that no one was taking too seriously, except for the sober-faced guards.  I didn't feel in any way threatened, or that anyone believed that I was trying to sneak out with a coin or metal of any kind, but it gives you a sense of how much value is placed on those commemorative coins, and how difficult it would be to get away with what starts out as a 20 cent product in process, and that would come out at the end as a 50 cent piece selling for $25!


Posted by Betty Reid Soskin at 5:02 PM No comments: 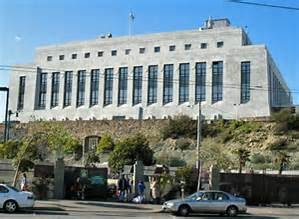 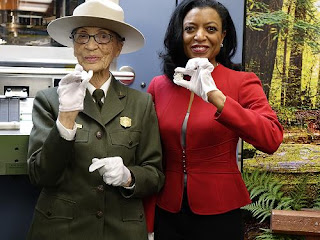 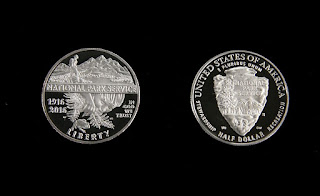 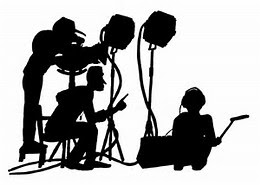 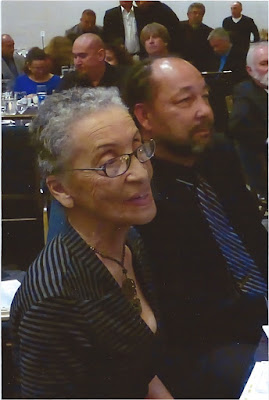 
Posted by Betty Reid Soskin at 5:29 PM No comments: