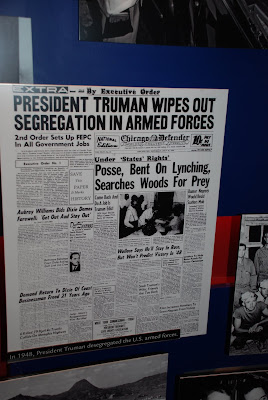 Thoughts are still a-jumble despite the attempts to arrange the words in some kind of logical order so that they make sense ...

They come from different time periods in my life, and are a testimony to the fact that life is not linear; that lessons come in bunches divided by time in irrational ways.

There's the piece that serves as an important backdrop to my childhood and youth -- that piece where, underlying everything else was the rage that would go unrecognized for decades.  Rage around the lack of fulfillment of America's promise of "Liberty and justice for all" as recited regularly in the Pledge of Allegiance, or, as those stated in the Constitution and Bill of Rights.  The words were meaningless to me, expressing little more than the empty visions of slave-owning white men whose wisdom stopped at the door of their great plantations and blinded them to the humanity of so many who would survive the brutality of slavery and the dehumanizing lifetime of racism and bigotry, of lynchings and Jim Crow, all still lived out in more subtle forms in contemporary life in our country.

That rage had served me well, it straightened my spine and enabled me to face into the winds of the continual unfolding of ever-changing patterns of discrimination as I aged into adulthood and the need to recreate a world that my children could live in with others in way that would serve the common good.

What came to me on that 7-hour flight home from NY was that there had always been a missing piece -- one so obvious that at my advanced age I wondered why this epiphany had not appeared earlier in my long life?

There is no Office of Fulfillment, Commission on Fairness, Department of Peace, Deity, Avatar, Bureau, Committee, Board or Secretary of Fulfillment.  That must come from us all.  And -- it was clear that -- just as I'd crossed some threshold in mid-life when I claimed my right to self-identify; to stop waiting to be shaped by the men I'd chosen,  I've always been free to be self-defined; to claim my right to express my woman-ness.  It was simply that the culture in which I was living had failed to inform me of this important right, so I'd lived a life of being simply negative space to the positive space provided by the men in my life.

At SUNY Broome I'd moved into the realization that -- somewhere over past decades I'd crossed another threshold, an important one.  I -- without knowing how or when -- had become a "Fulfiller!"  And it was critically important to know that each of us, with any luck at all, matures into the role -- and this may be the hidden secret of how the "Democracy" is maintained and nurtured over time.  We each carry a tiny piece of it, and that spirit is what sustains each of us, but lies silently in the wings awaiting the "claiming".

It was also revealed on that long flight over those "... amber waves of grain" that victimhood is incompatible with "Fulfiller-ship".  I'm not certain when that changed, but that my life today -- unlike that of earlier years -- is no longer being lived as a victim.  Oh, how one might wish to know the prescription for that outcome!


I came home in dread of the following week when I would be filmed as a "singer".  Being presented in the annual holiday concert at the Paramount Theater in a sold-out theater.  I would be standing on a stage backed up by 3 choruses and a full symphony orchestra for my 2-minute 26-second song!  I was terrified!  But I'd learned in the wake of SUNY Broome that I'd become a "Fulfiller" and that it was in that role that the positivity of what happened in that small auditorium, the warmth in those hugs, the selfies, had all come from the fact that I'd brought that role into the room with me, and that I'd made some small difference in the lives of those students. I did not come as a justifiably enraged Betty, but as something else not yet identified. That all I had to do was to own that truth, and to allow that realization to grant me the power to self-define; and to claim my right to do so.  To define my terms for performing as the storyteller that I've grown into, and not the "singer" envisioned by the filmmakers or others -- something I'd never aspired to be.

An unanticipated gift from the students and faculty of SUNY Broome.

Maybe the simple fact that  -- as a long-lived adult in the room, one who had survived the tests of a people struggling to perfect that "...more perfect Union," and who still believes in the dream of democracy ... gave some hope to those young people.  Those who will help to find the answers to the unfulfilled promises of the future ... for those who will follow.   As had we who'd stepped into the footsteps of those generations who preceded ours.  For those who have yet to learn that Democracy is a process that will never stay fixed.  That it was never intended to be. That each generation has to re-create it in its time, or it will surely die.  And that each of us born into it has a responsibility to enliven the dream as we move through our time on the planet.

It was a memorable evening that is still with me when I close my eyes and revisit ... but no more so than  on that 7-hour flight over those spacious skies ... .
Posted by Betty Reid Soskin at 5:17 PM No comments: