Feeling a little insecure this day,

it's been a long time since I've had to wonder just what I might be doing come Monday ...

When I allow myself to think about the audacity of a woman my age thinking that she can resign any position on a question of principle? How crazy is that? What in the world would give me the idea that I can walk away from any great job and pick up another at the drop of a resume? But, in thinking back over the past weeks, I can't imagine any other course of action. I could not have stayed, but walking away with only 3 months to go for my retirement benefits to kick in is probably not the brightest thing I've ever done. The state system requires five years of service, and I've worked under the PERS retirement system for 4 years and 9 months. One day less and you're on your own.

There is an alternative. Since both the city and county use the PERS system, if I can find some limited project (3 month stint), I can continue to accumulate credits for time served. Have put out word along the network and will hope that something will turn up. Otherwise, I will be one very expensive volunteer! Can't imagine not being involved in something. Will continue to do consultancies when possible, and to work on special projects with Barbara Becnel, but the steady income that I've grown used to, and that supports both my life and Dorian's has come to an end. Severe cutbacks in the state budget have eliminated her psychotherapist, her rent has seen another increase, and her meds that cost $10 in November rose to $300 after January 1st when she went for a refill. One might certainly question my timing, right?

Meanwhile, this afternoon I helped to celebrate the birthday of an old friend, and tomorrow is a concert of Dimensions Dance Theater with Omar Sosa, pianist, at the Yerba Buena Center in San Francisco. Am dreaming of tickets to see the long-awaited Lion King that opened this week and will be in S.F. until September.

Will meet on Monday with Barbara Becnel and Tom Hayden, then will complete engagements with those still in my datebook and that I can take into my personal life (some interesting projects), and plan to spend the next week lunching with friends and seeking more permanent work arrangements. Wednesday brings the 60 Minutes interviews and Ed Bradley. Have contacted my state senator to announce the introduction of his bill on the moratorium. Will have his answer on Monday. Probably should set aside the next week for worrying about approaching income tax preparation and then property tax filings, then, and only then, aarrggghhhh!!!!! Screaming time! But not until at least 60 days have elapsed.

My chances for employment at Hooters are pretty low, and I'm not sure I'll qualify for flight classes due to excessively sweaty palms -- but there must be something. There's a community college just down the hill from my condo. Maybe they can use a busybody type for something. Maybe I'll take those art classes I've been wishing to take -- "one day when there is time."

Don't think it's crackup time yet, but today my usually mind-bending drive on the freeway yielded little other than questions. Usually my best thinking is done while stuck in traffic. I keep a little tape recorder in the dash compartment, and have often been known to work out some pretty hefty questions while stuck between two SUVs and an oil rig on I-80. Today I couldn't focus, so noticed all of the negatives -- deisel smoke, sirens, garbage on the road, sinister-looking skid marks, angry drivers. Funny, that stretch along the bay usually brings up marine views, sailboats, windsurfers, an occasional kite, weird license plates, interesting sky patterns as the fog moves in stealthily from the sea... .

Was reminded again of just how true it is that we create our own reality... .
Posted by Betty Reid Soskin at 6:55 PM 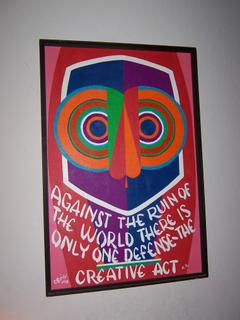 Resigned from my position and have spent most of this week closing out an important chapter in my life. It was somewhat sudden and involved a matter of principle, and one that I don't feel free to discuss publicly. However, I've been moving in the direction of a career change for some months. It was simply a matter of time.

Have discovered over time that an important stage in the aging process involves a growing sense of urgency. I'm far less patient in these years, and -- having a compressed period in which to accomplish so much -- drives me mercilessly at times. Unfortunately, most of the rest of the world is in a "hurry up and wait" place, with the luxury of time working in their favor.

Today the staff took me out to lunch at my favorite restaurant on the marina, and I felt the sadness of separation deeply. They've become so dear to me, and I was so touched by their caring. We've been together barely two years, but parting was still difficult.

Almost before I managed to move my personal files and pictures back home, the new pages of the next chapter began to unfold:

Very close to my heart has been the work of the anti-death penalty movement. Will be meeting with my friend, Barbara Cottman Becnel, and Tom Hayden (former legislator but now teaching at Occidental College in Southern California) on Monday. Barbara is the woman who managed to get Stan Williams, inmate on San Quentin's Death Row, nominated for the Nobel Peace Prize two years in succession. He's been nominated again this year for both the Nobel Peace Prize and the Nobel Prize for Literature. He is the subject of "Redemption," a film made for television but shown twice at Sundance Film Festival last week. It will be shown nationwide in April on FX Channel. Jamie Foxx plays Stan and Lynne Whitfield, Barbara. On Wednesday and Thursday of next week it opens the Pan African American Film Festival in Hollywood.

With the next execution scheduled for midnight, February 10th, the debate is heating up again in California with a member of the legislature considering putting forth a bill that will seek a moratorium until the system can be studied more closely. Death Row inmate Kevin Cooper may not be saved, but there is a new governor in place who will have to decide on the clemency issue, and he may be more receptive than was Governor Gray Davis who was so heavily-funded by the Prison Guards Unions. The next two weeks will give us a chance to see if there's been any change in the attitude of the citizens in this state. They voted 90% to support capital punishment some years ago, but with so many innocent prisoners caught up in a flawed system, sentiments are changing markedly across the country. We have no measure yet of the effects of the debate on the citizens of this state. Our executions are not as frequent as those of Texas, for instance, so the debate carries no urgency.

All that is to say that Sixty Minutes is sending Ed Bradley to the Bay Area to work on a segment on Death Row inmate Stanley "Tookie" Williams (the subject of "Redemption"). It will be aired in March. I have the responsibility of meeting with both Bradley and the legislator who is preparing a moratorium bill, in the hope that he can be persuaded to make his announcement on Sixty Minutes -- thereby getting national coverage. That'll be on Wednesday afternoon. But tomorrow (my last day at the office) will be the first day of my new assignment.

Not sure where all this will lead, but I'm feeling right about having freed myself from this last chapter in the Saga of Betty, and can't wait to see where life will take me next. It feels good. There's a quiet excitement about this unanticipated change.

Attended a retirement dinner for our city manager last night, and in looking around the room at that familiar crowd of actively involved people, it felt like home. There are two candidates for city councils that I'm working closely with -- that will continue. There is the Arts Commission that I can now work more closely with (been missing a lot of meetings due to the demands of my job). There is the Chamber of Commerce that is showing great interested in my vision of a now-abandoned downtown redevelopment into an Arts & Entertainment District. Will be meeting with the Chamber staff to explore that one day very soon.

I'm guessing that I'll become more of a player in the city than in the state, and that feels right. It's so much easier to effect change in the smaller arena. This is always where I've done my best work, I think.

This is a city in chaos, with a budget crisis of enormous proportions, and with most of the management team gone and replaced by interim staff. With firehouse closures, and public safety threatened in a time of a national emergency. This is also the time of great opportunity. It's a time when there is the greatest chance for making a difference. It's at precisely such times that the adrenaline flows wildly, and I see possibilities everywhere I look. To be free to explore those opportunities is the best of all worlds. It was truly time to move on. It feels right. But I'll sorely miss those wonderful young women with whom I've spent these last several years working to save the world. There are some exceptional young people working in public service. I wonder if we really appreciate just how many there are out there, doing their best to serve us all?

Now I'll look for the batteries to fit into my beautiful crystal mantel clock -- a most thoughtful gift from young women who have enriched my life and kept me whole for even more years. The inscription embedded in a small silver plaque (taken from an original painting that hung on my office wall) reads, "Against the ruin of the world there is only one defense; the creative act." The painting was given to me many years ago by an artist friend, Clarice Bois. It's meant a lot to me. It hung near my work space at home, always. I brought it along to my office when I went to work for Loni. I'd thought that painting only spoke to me, but obviously Clarice had made her impact on each of them as well. She died several years ago, but this tribute to her work touched me deeply.

...I will wear the exquisite handpainted "wearable art" scarf of muted purples, greens, lilacs, and pale yellows, when I want to feel particularly pampered and regal.

The future is in good hands.