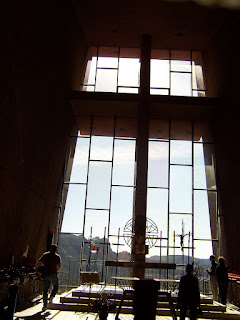 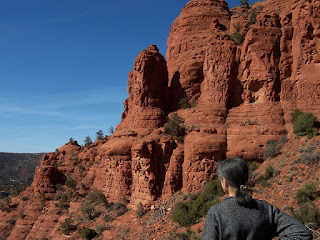 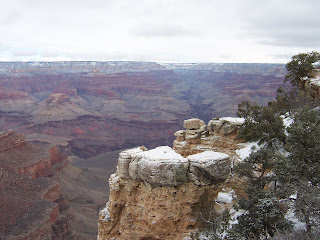 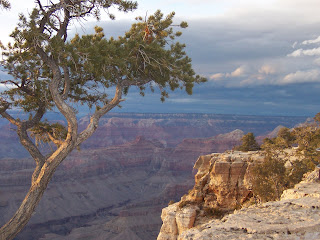 I'm home again ... and have spent the past week since returning trying to figure out how it will ever be possible to write about the ineffable ...

When our 5-hour bus trip from the Phoenix airport brought us the first glimpse of the Grand Canyon -- I was speechless. There is no way to capture the grandeur -- the wonder cannot be translated onto a postcard, or even a huge glossy expensive coffee table book ...

Reminds me of the next day when there was the opportunity to stand with others at one of the vista points along the south rim ... trying to turn away from the almost impossible-to-resist urge to jump! It's hard to explain that there was no suicidal impulse propelling me forward -- just the almost irresistible wish to fold into the universe in this wondrous place ... to become one with all that IS! Crazy? Perhaps. But in that setting it felt primal. Clean. Real. This was not the place to be alone, I think.

There was a group of young people standing nearby. I listened as they, too, were apparently seeing this scenic wonder for the first time. For the most part they were silent. Then one oohed quietly, "...Cool! WOW!" My reaction was one of quiet (grownup) contempt for the failure of education to arm kids with no more adequate ways of expressing their feelings. How had we come to this -- this impoverishment of the English language -- this lack of adjectives that would reduce youngsters to this oft-repeated and over-used nothing of an expression? "Cool indeed!"

On Wednesday evening of the second week of the training session we learned that there would be a total lunar eclipse that we might view from vantage points along the rim not too far from the training center. I could hardly imagine such an event happening during my stay here -- to witness a lunar eclipse over the Grand Canyon! What kind of serendipitous coming together of the fates could have brought this not-to-be-missed once-in-a-lifetime celestial event to insignificant me? What could possibly be more magical or more unexpected?

On Wednesday the snows returned with a vengeance. It snowed most of the day; a sight so beautiful to my unaccustomed eyes -- having grown up in coastal California. The thought of missing the eclipse was only a minor disappointment. This white wonderland may just be enough for me. I was operating on overload in all this wonder stuff anyway, right? What more could the universe possibly offer after standing on the rim of the Grand Canyon viewing every stratum of millions of years of geological evolution from Mexico to Canada and from this one astonishing place?

The snows continued to drift down soundlessly throughout the day with only occasional breaks. About 18 inches had fallen by nightfall.

Then -- as if by some magical off-stage signal by some Grand Wizard -- just minutes before the scheduled beginning of the eclipse -- the snows ceased -- the sky was suddenly crystal clear. Here -- while everything stopped save breathing -- the rare and great drama of the universe began to unfold.

I watched through tear-filled eyes which distorted the image but increased the magic by so doing -- and felt deep inside that I was absolutely essential to this unfolding. An essential part of the miracle simply by bearing witness to something multitudes of human beings have shared over the millenium; had written into our legends and cultures and painted and carved into our arts and danced and sung ... and here I was at one of the holiest of places of the world -- bearing witness, too, and feeling at one with every living creature across the planet -- over all of the ages.

All I could think of was "like waaaaaay cool!" and hecka WOW!"

...on the walk home I grinned silently to myself as I came to terms with the fact that those adjective-challenged young people were surely experiencing the awe to the same degree that I was - and that they, too, will someday make or find their own means of expressing it -- through dance, through song, through carvings and stories and rhymes -- and that this is what forms the bridge of human experience that we all must cross before time overtakes mortality.

Posted by Betty Reid Soskin at 12:10 PM No comments: