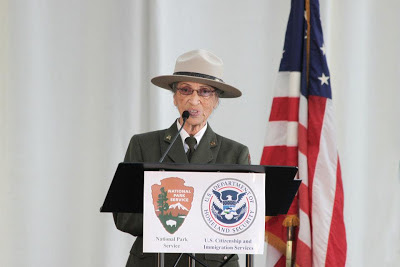 These are the first stirring words of our Constitution, this founding document with its ever-evolving Bill of Rights that has sustained us as a nation for lo these many years -- defining and insuring our freedoms.


I once heard those words as describing birthrights, as divinely inclusive, despite the fact that my African American enslaved ancestors were denied the freedoms described therein by the founding fathers.  Being born in relative freedom a half century after the Emancipation Proclamation freed my ancestors, this powerful document would -- in my mind, at least -- serve as the guarantor of my rights of citizenship and would become the basis for a lifetime of political activism against real and imagined injustices caused by ignorance and intolerance,  unworthy of and counter to -- the hopes and promises upon which this nation was originally founded.


In these later years, I’ve matured into a deeper understanding of its meaning.  The first sentence says it all:  “We the People,  in Order to form a more perfect union ....,”  a stark admission of the imperfections therein.  A more perfect Union.   The words appear to deliberately leave room for the social evolution that would occur over our lifetimes and into an unknown future.


Those sacred documents were not delivered to us carved onto stone tablets; were never meant to be “deeds” to our birthright as American citizens, they are simply blueprints with which each succeeding generation must  re-create “democracy,”   each generation  bearing the responsibility of “...forming the more perfect union.”


Ours is a participatory democracy requiring constant vigilance in order to defend, preserve, and protect our freedoms as described in the Bill of Rights.

We also have the freedom to err, to waver in our constancy; to be unwise and mistaken in judgment; to be unfair to and critical of ourselves and others as we travel through life experiences that define our individual selves, and our collective identity as a people ... and as a nation. 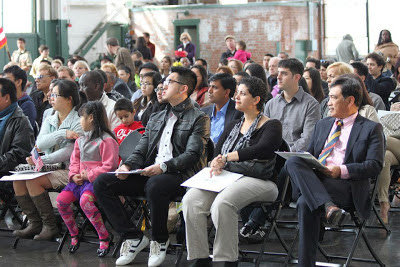 You, who have gathered with us  today, have chosen to assume the shared responsibility for re-creating democracy in our time.  You bring cultural differences, languages, and customs from distant lands to enrich what is already embedded in the national landscape; stories, music, poetry, literature, unique customs, religion and philosophy, and as yet undiscovered  secrets of science and technology. Our nation will continue to change and evolve for your having become a part of this never-ending striving toward the attainment of “... our more perfect Union.”


But be forewarned, this imperfect political system will always need the combined energy and voices of Americans new and old -- in every phase of the continuing struggle toward a perfection that is destined never to be fully attained despite our best efforts and often futile attempts. The illusive perfection of “democracy” will always be dependent upon our ability to maintain a balancing point between opposing political forces -- because it is in that vibrant and chaotic cauldron of constant and persistent change that the energy that empowers our dynamic system of governance is generated and renewed.


And we must not forget that political dissent is a necessary element in the re-creation process; an important right that allows the nation to self-correct -- to regain stability when we stray too far from our stated ideals, and that there will sometimes be pain and sacrifice to be shared in the cause of securing and sustaining those freedoms.


We welcome your voice and your dreams and your presence among us -- as together, we continue the never-ending grand experiment of government of the people, by the people, and for the people, as citizens of these United States of America.


Again, welcome to each of you, from each of us, Americans ... all.

Posted by Betty Reid Soskin at 6:35 PM No comments: