The mystery of those 8 caskets is finally solved ... after years of murkiness ... 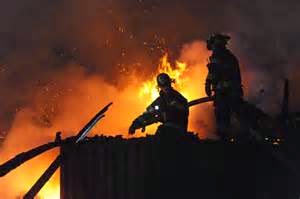 There have been a number of posts over several years -- the most recent being within the past month and available in recent archives (enter the words Port Chicago in the search bar above).

An inquiry sent to the Kaiser Permanente Heritage Department in Oakland paid off dramatically -- and it only took about two weeks of  KP's staff delving through old records.  Finally, an email with the leading word, "Eureka!" arrived from Ginny and Lincoln who'd located a couple of newspaper articles that were published on January 10, 1944.  Both the Oakland Tribune and the San Mateo Times had front page columns telling of the tragic dormitory fire that caused the deaths of 8 black shipyard workers and at least 20 more who suffered injuries:


"Trapped in their bedrooms, at least 8 shipyard workers were burned to death today in a fire that broke out explosively, and destroyed the two-story wooden framed Dormitory O located near Kaiser shipyard 3."  It was one of many hastily-constructed to house migrant workers during WWII.

The names of seven of those lost were listed, the eighth was not identifiable at the time of the news release.  One was a 17 year-old boy.  So those caskets are not from the Port Chicago tragedy on July 17 of that year after all, but from an accidental fire that destroyed one of the temporary buildings that had been quickly erected to house the migrant shipyard workers. 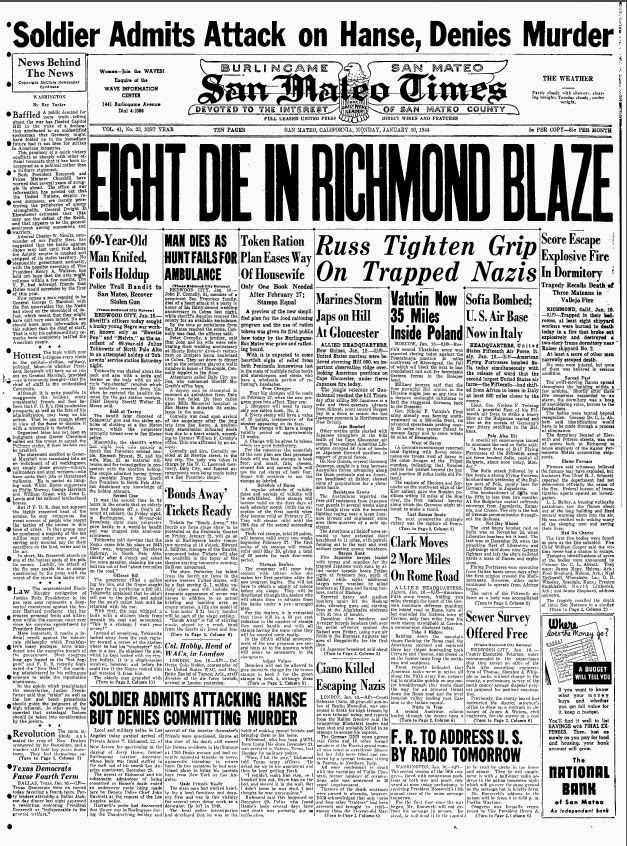 A few days ago I drove to the site of the tragedy -- It happened at South 11th Street and Potrero  -- less than a mile from our Visitors Center -- at the historic Nystrom Village WWII worker housing site.  There are no signs of the awful event ever having occurred.   Several small warehouses now stand on the site that lies about 500 feet from the baseball field named in the honor of Dr. King in what is still largely an African American community, and in the middle of what is defined as a part of the Rosie the Riveter/WWII Home Front National Historical Park.

The articles go on to say:

"Shipyard Housing Units branded Firetrap ... when the firemen attempted to access a water supply -- they discovered that the corner fire hydrant was rusted out, so that none was available to fight the flames.  It only took a few minutes for the entire structure to burn to the ground."

The E.F. Joseph Collection has  yielded several photographs of the burial ceremony, with dignitaries from both Kaiser Permanente and the segregated "Jim Crow" Boilermakers Auxiliary-36 in attendance.  The floral wreaths bear the corporate logos of both, but given the times, this represents but 8 of the 37,600 casualties that occurred on the home front in that period.  This was 7500 more than were killed on the battlefront in the time measured.  Remember folks, this was pre-OSHA, but helped to create the will to form the agency to oversee safety in the workplace that has protected American workers since that time.


Those African American workers can now be properly memorialized by having a bronze sculpture standing in that community through which that history can be interpreted.  Finally, a chance to have black men honored -- not as noted athletes, entertainers, but as the faithful laborers who answered their country's call to service on the Home Front, much as they have done since being freed from slavery by the Emancipation Proclamation.  Black men have been essential to the building of this nation throughout history -- and, during WWII were active in the historic productivity that changed the course of the war of that generation.   They could be, symbolically, stand-ins for those thousands of home front casualties who've dropped away into history without proper honor or notice.

In an effort to raise interest in creating a memorial to those men, we will begin to include this history soon in our Center, and will post the new photographs as soon as possible.

I'm both excited and challenged by what lies ahead, but this will happen.  There are several hundred black families who are still residing in the community -- and who have lived silently with this tragedy for over 70 years now.

It's time for black men and boys to be honored for their contributions in that great Arsenal of Democracy as created by President Franklin Delano Roosevelt to save the world for a Democracy that was largely theoretical at the time.

We can do this.
Posted by Betty Reid Soskin at 1:21 PM No comments: