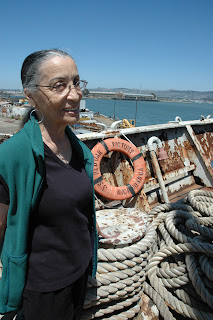 Film crew arriving on Monday for a taping ... and all I can think about is whether the dust will show, and whether there will be time enough for a good house-cleaning ... .

It's been in the works for weeks, now. One crew on Monday (yes , I know it's a holiday, and reminded the producer of that fact), and a KQED taping on Wednesday in San Francisco. Both have to do with participating in cameos in two documentaries that are being produced to augment the great Ken Burns epic, "The War," now completed and awaiting the September release nationwide. Each PBS market across the country will be presenting local versions with discussion groups and study guides. Big event.

I suppose that I'm one of the few of those folks left -- who survived the period and are not on life supports! Therefore I will be asked for words of wisdom and/or the equivalent. Not sure what they're expecting, but for whatever its worth -- I'll have my moment of response to life as so many of us lived it.

I'm told by the producer that there will be a crew of 3 arriving from Southern California on Monday, and that they'll do the interview here in my living room surrounded by the accumulated artifacts of my long life.

Yesterday we did a photo shoot on board the SS Red Oak Victory for the Iron Triangle newsletter -- in what was then the old Kaiser Shipyard #3 and that is now the Port of Richmond. It was a beautiful afternoon, and I was reminded that I never actually saw even one of the 747 ships built by Henry J. during that chaotic 24-hour-a-day four year wartime frenzy. It seems just a little dishonest to be photographed in that setting as though I experienced any of the excitement and sense of patriotism that marked the era for so many.

For a few minutes the only thing I could recall was that it was from the Red Oak Victory that my son, Rick's, ashes were scattered only a few years ago. But I've learned to disassociate from that sadness much of the time now (except for Christmas), and I remembered instead that one of the last times we were together was the day that we shared the experience of being in the crowd that sailed her from her last berth at Mare Island (Vallejo's naval graveyard) on the day she was towed to Richmond by two powerful tugs. That was a glorious adventure -- with fire boats arcing their graceful greetings to us as we left San Pablo Bay and entered the San Francisco Bay from beneath the Richmond-San Rafael bridge -- with restored World War II planes flying playfully overhead ... .

Nah. I need to remember that I was a 20 year-old bride filing membership cards in a Jim Crow (racially segregated) union hall about 2 miles away on Barrett Avenue. Not very romantic, I suppose. After all these years -- I'm still coming to terms with feelings of inadequacy as I try to put forth the image of "Rosie" that is expected of me in these interviews.

And, of course, I'll be honest.

But the photo above may be somewhat deceptive ...

Maybe I can clear that up on Monday when PBS-KCET provides the platform for truth.

It is a relief to know that the nation is finally ready for these troubling conversations. I'm glad that I'm still around to participate in them. Our children and their children have the right to know.


Posted by Betty Reid Soskin at 8:22 PM No comments: