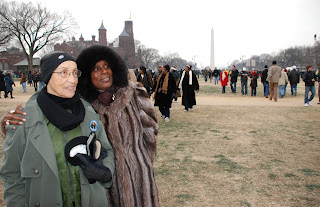 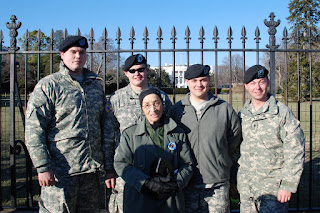 Posted by Betty Reid Soskin at 11:17 AM No comments:

"The lifetimes of three women" ... starting with Mammá who was born into slavery in 1846 ... freed at the age of 19 with the Emancipation Proclamation ... .

(Still having problems -- have no idea how to get rid of the clone image -- but am posting anyway and will work it out later.)


Posted by Betty Reid Soskin at 8:24 AM No comments: 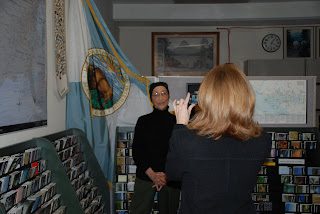 Have been trying for days to upload the PodCast that was created at the National Park Service headquarters in Washington ... no luck yet ... but I'm still trying.

The reason I'm so anxious to post it here is because I'm having such a hard time making any sense of the actual experience at the Inauguration ceremony. I believe that -- in those few words (the video is about 5-minutes) on camera -- I may have described it all. No amount of thinking improves on those few sentences.

Unfortunately, my camera didn't work for reasons I still don't understand, but that appeared to be true for others seated around me. It may have had something to do with the frequencies in the atmosphere. I simply don't know. Tried to take some photos with my cell phone but it was very new and I'd never tried to take pictures with it before. They're in the phone somewhere, but I haven't the foggiest notion of how to transfer them to my computer.

I've reached the point in my technological development that there are wires and cables and transformers scattered throughout my den -- and I've completely lost control over the entire domain! They've been separated from their "parent" apps, and at this point I have no idea whether they're meant to service the cell phone, my computer, my portable DVD player, the printer, scanner, little rechargeable battery charger ... see what I mea 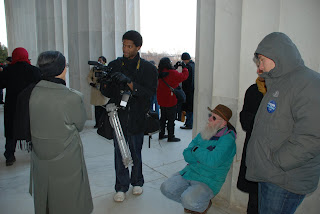 The very thin veneer of technological expertise that I've been hiding behind for lo these many months is beginning to give way to Doofus-ness, and there seems to be very little to be done about it.

Until I either figure this out, or, am able to find some Nerd upgrade somewhere buried in my aging persona, I'd suggest that you go to www.nps.inau/ then follow the link for "The National Park Service, Where History Happens." I know it's there but I can't figure out how to bring it here. Tomorrow I'll call public relations and ask them to send a DVD. That may solve the problem and bring back my badly-damaged self-confidence! 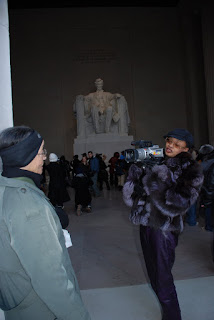 Incidentally, except for the staff at the National Park Service, these interviewers seemed to be approaching anyone who they thought might be a "story." They had no idea who I was or how important I may or may not be. It was not personal at all. They were simply searching for the story and I caught their eye; probably my obvious senior status. We're the ones with the memories and the obvious connections to the struggles of the past. On January 20th we became relevant to the young as the carriers of the lore of our times. These encounters with these young black media professionals had the quality of respect and status in this new age that stretches somewhere far beyond cynicism. It was a good feeling; an experience I thoroughly enjoyed. It felt as though in some way I was invited into a partnership in their work. I didn't need to see the final product. It was enough to be involved in the process -- together recording history.


Photo: Top left Jody Lyles, producer of the PodCast at NPS.
Center left: Interview at Lincoln Memorial for Canadian Television.
Bottom: One of several on-camera interviews done at the Lincoln Memorial for various channels.
Posted by Betty Reid Soskin at 6:35 PM No comments: