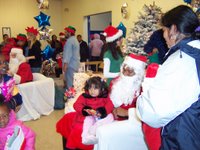 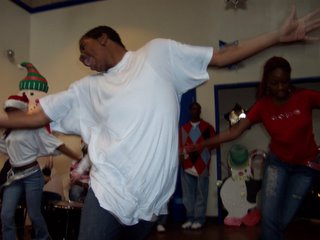 All things in their own time ...

Maybelle's memorial service was touchingly beautiful; but it was the living left in her wake who served to set my legs under me again -- full balance has returned -- and an appreciation of the rightness of the succession of life, in an odd way, brought peace. The children in that room were amazing.

Today I attended the 58th annual Charlie Reid's Christmas Party at Shields-Reid Community Center -- a center named in his honor years ago.

Charlie was my first husband's uncle, a man revered in Richmond by all who knew him. He was an icon who effected the lives of the children of North Richmond for many years. He is a legend who still walks these streets and is held up as the paragon of virtue, especially to non-white children. He was the playground director, disciplinarian, baseball, basketball, and football coach, grounds-keeper, benefactor for whatever children needed (including parenting). There is a touching videotape of Charlie and his work that is occasionally shown on the local cable channel. He has provided the model for Reid young men over the years, and is the source of great pride.

At a meeting I attended last week (the Main Street Initiative), it was interesting to see that in the draft of a mural that is in the planning stages for the intermodal train, BART, and AC Transit bus station, Charlie is featured prominently among the many scenes of Richmond life. It will be a 6'x30' montage that will immortalize this loving man who meant so much to so many. There will be lots of bits of civic life shown, but our family will see only Charlie.

Fifty-eight years ago Charles Reid gave the first Christmas party that featured a black Santa. He wanted African American children to experience the holiday love and giving within the context of their own lives and culture. He was far ahead of the black consciousness movements.

His family has continued the tradition now for all these years since his death several decades ago, and has formed a nonprofit that collects toys that are given away each year to over 3000 children of every age, color, or race. Gifts are distributed from one until four o'clock on an afternoon near Christmas to anyone who turns up. Today the lines were shorter since the weather was stormy, but they came as always, and the two Santas (one black and one white) were wonderful.

There was caroling and dancing and a cheer-leading exhibition by our prize-winning team. The kids who participate in the drill team marched to their own drumming. Proud parents took photos of gleeful kids, and Christmas was suddenly here in living color and palpable love!

...and just about in time, too. I needed to be lifted out of the awfulness of so much that has transpired over the past few weeks.

Tomorrow I'll go with Tom and his family to visit Union Square in San Francisco -- then to Japan Town -- and finally to Tadich's in the financial district for supper. San Francisco's skyscrapers are outlined in lights now, and there's nothing quite like Gump's windows to wake the spirit and turn on the internal holiday glow!

I still can't bear to share the most recent conversation with my devastated friend, Barbara Becnel. She is still facing what will be the equivalent of a state funeral for Stanley Tookie Williams in Los Angeles on Tuesday. I can hardly imagine the pain she must be having to live through. But she has a family in Southern California and won't be alone through it all ... .

As a final irony -- Did I think to tell you that -- Stanley Williams was executed on the birthday of Jamie Foxx -- the actor who played him in the film "Redemption," and who visited him in his final hours?

Photo: One of the dancers from the neighborhood. The second pic is self-explanatory, but do notice the racial diversity. There was an interpreter to be sure that the Latino families were brought along. This is how the world should look everywhere. (Click on the thumbnail for a full picture of the room. It's wonderful!)