Attended a small gathering (I believe the capacity of the room at Starr King School for the Ministry is 50 -- including the standees in the hallway) this evening to hear Reverend Jeremiah Wright, Pastor Emeritus of Chicago's Trinity United Church of Christ. Upon learning that he would be in the Bay Area to receive an honorary doctorate at the seminary's commencement this year I wangled an invitation. As a former member of the Board of Trustees, it was relatively easy, though I was certain these invitations were prized by everyone within the Graduate Theological Union.

I had no idea what to expect, but what a brilliant theologian is this man! What appeared over-the-top in most of the (heavily-edited for the sensational) news coverage during the presidential campaign -- in the intimacy of that small space -- he was kind and warm and wonderfully humorous! What a wit!

He is theatrical to a degree but in good taste and with kindness. He talked for well over an hour and took questions, including some relating to the break with his famous former church member. His answers were honest and direct and (still) righteously angry. The residual pain is evident and he makes little attempt at hiding it. There was an instant where I was sharing both the pain of his loss and -- simultaneously -- the pride that lay just beneath it. Both were present in the glint of anger in his eyes as he spoke about the events that preceded the now famous break.

It was easily understood why one would have been captured by this charismatic preacher; that his congregation would be 6000 productive contributing Christians -- and that one might even ascend to become leader of the free world one day.

It's quite possible that my ability to hear him sympathetically had to do with the fact that I'd spent the day in my cubicle reading In Motion, a marvelous new book published by the Schomburg Center for Research in Black Culture. It is about the sequential black migrations over the centuries -- starting with the slave trade into the present.

In preparation for a leadership class of Richmond community members for whom I'm speaking on Thursday morning, I'd been doing a lot of reading. A few days ago I read about Pullman porters whom the author claimed to be the men who created the black middle class in the 1920's and 30's. Fascinating reading. In the process, I learned that George Pullman, owner and CEO of the Pullman Sleeping Car Company hired only dark-skinned African Americans -- all of whom were called "George." (There's another book title that I'm anxious to read called, "10,000 black men named George."*) Pullman's reasons were that the men were a part of the property of the railroad, like sheets and towels and bottles of hair tonic and whisk brooms. They were not to be seen as persons at all, but as black robots provided to serve white travelers -- to see to their every whim while aboard the luxury railroad cars. Subservience was a prized attribute in that cruelly dehumanizing system.

These were the men of my father's generation; my uncles and cousins. These were the men who were silently complicit in their degradation for the salary of $60/month for a 48- to 60-hr workweek, and a chance to eavesdrop on conversations between successful white traveling men who shared stock tips and business strategies while their shoes were being shined by "George," and which allowed George to earn enough salary and tips to insure that their children would enter the universities, medical schools, and seminaries. It would be their children who would breathe life into the growing Civil Rights struggles over the ensuing decades.

I guess I was just about ready for Rev. Jeremiah Wright tonight.

I will attend the commencement ceremony on Thursday evening in Walnut Creek at Mt. Diablo Unitarian Universalist church on Eckley Lane. I need to do that if only to experience this dynamic presence in the setting that carries so much of my coming-of-age history.

It's experiences such as this that keep me grounded, I believe. But they can be an emotional roller coaster at times.

Maybe this is another of those recently discovered dimensions. Maybe this will be one of those times when I'm unable emotionally to process all that will be incoming -- and dimensions may be the place where I hold them in suspension until -- in some quiet time of reflection I can figure it all out.


*10,000 Black Men" is also available in a film starring Andre Braugher.
Posted by Betty Reid Soskin at 9:00 PM No comments:

Because his name has become so prominent, Dr. Oz of Oprah fame influenced my decision to log on to take his "Real Age" test. Might be fun, I thought. Let's see how I can challenge the experts who think they can measure such a thing. I'm doing this, of course, secure in the knowledge that I'm going to beat the system, right? How could I not? I'm an 87 year-old woman, fully employed, actively engaged in life, able to still wear clothes I wore in high school, for heavinsake!

Took the 4 minutes required and answered each question honestly and completely and guess what?

I discovered that my "real age" is 92 years and 7 months!

How could this be? I should admit going in of course, that vanity was the great motivator here. It continued to gnaw at me for hours after as I tried to rationalize how such a thing could be.

It must surely have been the exercise questions. My physical exercise comes mainly from jumping in and out of my little red car every day. No Pilates, no yoga, no "walking up several flights of stairs instead of taking the escalator;" no workout at the loc 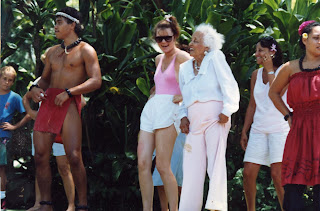 al gym or even walking or running or using the treadmill. Just the normal activity related to my work. So I answered all of those questions with a "no." That must have shot my score to hell!

Tennyrate, I'm still miffed enough to warn you other vain feminists not to pay any attention to such surveys.

On the other hand, maybe 92 years and 7 months is not as bad or as "old" as our fears might suggest. After all, my mother, Lottie Allen Charbonnet, was still spryly hopping on the bus in 3 inch heels and window-shopping for hours at the downtown department stores every Saturday at the age of 95. (She lived to be 101.) Yes, that would be Mom dancing the hula with the chorus line on the stage at a luau at a fancy hotel in Honolulu the year of her 95th birthday!

Do you suppose there might be something critical missing from these surveys?