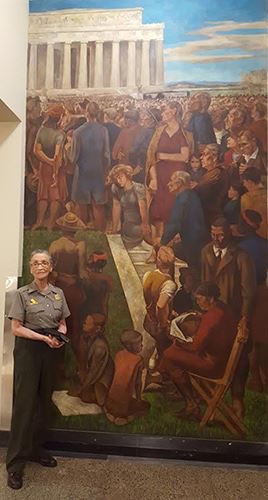 One of the WPA (Works Projects Administration) murals in the Department of Interior Building ... .

These were from the Franklin Delano Roosevelt era, and are truly treasured artifacts of those progressive times.  They turn up throughout the building, and one can take a guided tour to see them all.

This one is by an artist's whose name I've forgotten -- but will retrieve and post -- and pictures the audience at the Marian Anderson's historic concert at the Lincoln Memorial.  If you'll recall, this was due to the Daughters of the American Revolution's refusal to allow her to sing at Constitution Hall.  First Lady Eleanor Roosevelt -- with the help of Secretary of the Interior Harold Ickes arranged for the concert to be staged on the steps of the Memorial to thousands of citizens.

The murals are controversial in some cases, reflecting the politics of the times, but were allowed expression without comment or objection.

To have the chance to see them on my 95th birthday was such an honor and a privilege.  That this would occur on the day when I met with 30 Freedom Rangers, 12-14 year-olds who had just returned from a bus trip through the South where they'd visited Civil Rights sites of the National Park Service -- to be followed by a birthday party 'down the hall' with Director Jon Jarvis and the WASO staff; then for a visit to the Ford Theater across town! 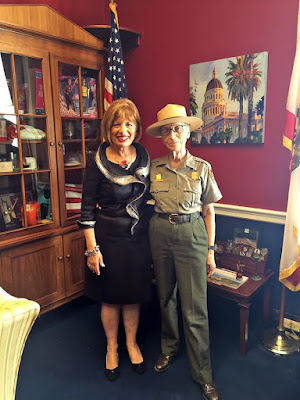 It was a day to remember.

Stopped in for a short visit with Rep. Jackie Speier before heading off for another with my representative, Congressman Mark DeSaulnier.  The invitation had arrived prior to our leaving the Bay Area.  It was our first meeting -- before we participate in an all-day conference for seniors held in her district every year.


Rep. DeSaulnier's role has been critical to the effort to gain the support of the president toward a final resolution of this lingering stain on the nation's home front history.  It occurred in those tumultuous times before we became more open to the lessons of democracy. 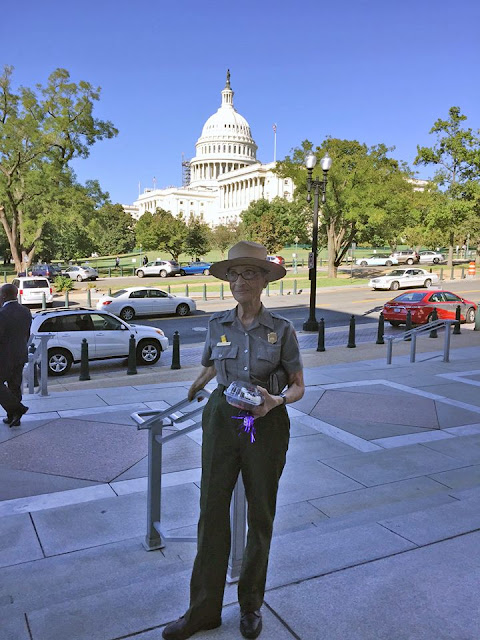 The Friends of Port Chicago has worked valiantly toward that end for years.  Since this is a member of our 4-Parks -- it seemed only fair that Kelli and I make the attempt to breathe whatever life we could manage to while at the seats of power.

Got to discuss the stalled petition submitted for the exoneration of the Port Chicago "mutineers", and was disappointed that so little has happened to move it forward for the families of those courageous dissenters whose convictions for refusing to return to loading explosives after the disaster of July 17, 1944.  Their brave action brought on the desegregation of the Armed Forces in 1948.

I've never understood the resistance to exonerating those young men.  If only our leaders would see -- if only we could communicate that it is not simply some isolated case of navy men disobeying an order during war time, but is the perpetual -- down through the centuries -- under-valuing of black male lives (that "3/5th of a human being" thing) -- that was the reason that over 3 thousand blacks were lynched over a century between the mid-1800s and the 1900s; the reason that they're disproportionally imprisoned; the reason black men are being destroyed today on the nation's streets in questionable police actions; and the reason those 50 young black males would have their lives dishonored by the refusal to exonerate them in the face of refusing an order under circumstances in which all white officers were given 30 days trauma leave.


If ever we are in need of sending a positive message to young black males who live every day in the fatalistic belief that their lives will end prematurely ... it is now.

This is not a new story.  To the contrary; it is centuries old.  It is tragically etched into our national consciousness, into the nation's DNA, and needs to be recognized and finally rooted out!  The exoneration of the Port Chicago "mutineers" is so much bigger than the story, alone, but could well provide a breakthrough in black and white relations between young black males and the authorities who, theoretically, are sworn and expected to protect them.

This is all of-a-piece of a despicable old normal that needs to be re-classified as an aberration!

How much more clearly could we state that Black Lives Matter?


We're still hoping to accomplish this before the Obama administration leaves office.