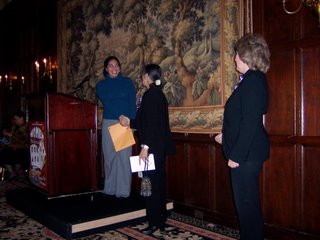 An exhausting sleepless night ... the promise of today's celebratory afternoon at the college ...

and the feeling that I've been revisited by all of the significant people in my life -- now deceased -- for the purpose of reminding me that I'm a conglomerate; the sum total of them all -- and that I'd damn well better not forget it!

In the Rem sleep state I clearly recall myself -- as if at the Oscars after a long walk down the red carpet in a flowing gown fashioned by my dressmaker cousin, the late Annabelle LeBeouf Therence -- tripping on my train while receiving my statuette and doing one of those endless rambling speeches that had to be cut off by the orchestra starting up and growing louder as I tearfully struggled on -- trying to squeeze in all of my children, grandchildren, a fair number of craftsmen, bright and charming gay cousins, painters,drunken uncles, college presidents, at least one managing editor, many writers, department heads, educators, red caps and porters, maids and garbage men, bricklayers and engineers, postal clerks and musicians and artists -- just to be fair. Couldn't leave anybody out; nope. The orchestra, by the way, was playing not one of those Conductor John Williams specials, but Duke Ellington playing "Take the A Train". Whatta night! And there was mom's cousin, Wellman Breaux sitting there blowing his trumpet as he did as a sideman in Ellington's early days.

At one point I thought of Leontine Breaux Allen (Mammá), my slave ancestor who was born in 1846 and died at the age of 102 in 1948; when I was 27 years-old. I remembered the stories about how it was she who acted as the resident intern for the little community that was identifed only as Welcome Post Office, St. James Parish, Louisiana. From her little cabin beside the levee of the Mississippi, she gave birth to her own 15 children and mothered another 5-10 more of her grandchildren who shared her home; my mother among them.

During one wide awake period I thought about the story of how she was the midwife who brought the little community's babies into the world, but who in addition, supported (white) Dr. Hymel in his medical practice as the circuit rider physician who came through about every 3 months. It was Mammá who rode her horse or walked through the countryside placing a white towel on the gate posts where someone needed medical attention. It was Mammá who tended them after Dr. Hymel left the area -- and all this in addition to the raising of her own family (as the widow of a Civil War veteran) and the planting and tending of the fields that supported her brood.

Then -- at somewhere around six this morning I dropped off to sleep; feeling quieted.

Today at Contra Costa College I'll be honored along with other worthy women of the community -- but as a special honoree due to having been name nationally. It's been a sobering experience to be so singled out.

...sleep came when I realized that what may best describe my life would be that I, too, have traveled through time symbolically draping white towels on the gateposts where problems were evident, and doing my damndest to make things better by healing where possible. In my various civic roles, and as a black business woman, as a field rep to two members of the state assembly (my "Dr. Hymels"), and now -- in these advanced years -- using that legacy in my work with the National Park Service. What a powerful insight is that!

Later today I'll dress in my black crepe power suit, around my neck I'll wear the pearls Mel gave me on our wedding day in May of 1942; add to that the Lady Hamilton wristwatch that has 4 tiny diamonds (one for each child) added on a later anniversary. I'll add to that a thin gold band that married me to Bill in the Seventies. Inside my black bag will be a small beautiful beaded drawstring silk bag with a Paris label that Great Uncle Dr. Raleigh Coker gave to Great Aunt Emily on their 35th wedding anniversary (in the Twenties), presented by Aunt Emily ("Nanny") to mother's younger sister, Aunt Vivian (the trickster) when she graduated from Xavier years later; who gave it to me a few years before she died. I'll slip my grandfather Louis Charbonnet's (died in 1924) business card into my wallet beside my credit cards. On my ear lobes the tiny pearl and silver earrings and silver rosebud necklace that Tom gave me last Christmas will be added to the mix and I'll be ready. Just how many lifetimes do you suppose all that represents? Sequential lifetimes, of course, bracketed by slavery at one end and the information age at the other.

No one will ever guess that there is a huge invisible crowd there in the shadows of that stage -- all there feeling redeemed from whatever life presented in their time -- redeemed through our shared DNA -- and by what they've each invested in the living of my lifetime.

This is just the beginning. Next week I'll fly to Los Angeles for the ceremonies and then a day after returning, to Washington, D.C. for another.

Photo: Taken during National Women's History Project ceremonies at the historic Hay Adams Hotel in Washington, D.C. on March 22nd. Aunt Emily's lovely beaded bag is shown in my left hand as the representative of Rep. George Miller is making his presentation of a glowing letter that I will frame soon. To my right is Executive Director of NWHP, Molly Murphy MacGregor.

Posted by Betty Reid Soskin at 11:09 AM No comments: 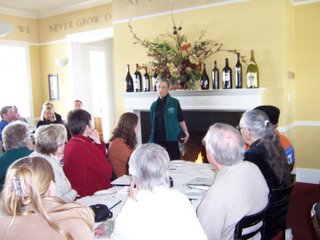 Today I met with 50 young (and not so young) teachers from a program called "Expeditionary Learning." They came from all over the country to experience the park, the memorial, and the collections. It was our time to show off a bit, and share our work.

I was their just-before-lunch speaker and was joined by four other "Rosies" of the period of World War II who shared their experiences informally during lunch. We each have done this before and are beginning to get more and more effective at doing so.

I opened with, "I have nothing prepared (true) so will simply talk until truth runs out." That lasted about 20 minutes, I believe, and was just about right for the setting. Their questions were on target and allowed for an expansion of the themes raised. I'm really beginning to enjoy these outings and becoming really comfortable in making these presentations.

I've learned to invite listeners into exploring those "...lost conversations and untold stories" with me, and relying heavily on the differing realities experienced by my war generation. Find myself wondering if war makes any more sense to those youngsters fighting and working now than it did for those of us who were involved in those years?

I recall saying today that I was so confused at 20 and as an African American young woman that I wasn't all that sure who the enemy was ... strange thing to say. I didn't know that I'd felt that until the words slipped through my lips. It was true. I need to give that more thought before I leave for the NWHP ceremonies in Los Angeles and in Washington, D.C. next week. My words will be weighted differently. The setting will be formal and the occasion sobering. I'll be asked to say a few words of acceptance for being honored, possibly, and I must give some serious thought to just what those words should be.

...but how does one encapsulate a lifetime into a phrase or two?

Maybe it will take no more than to recognize the importance of those wise words of the Monk, David Rendl Nast, "...there are two simplicities; one that comes before and the one that comes after -- complexity." I've lived long enough to understand and appreciate the second of those, and -- to not lose the strength and purity of the first while growing into that understanding.

Those cannot be the words uttered, but reminding myself of the importance they hold in my understanding of the world will help the right words to express themselves -- if I stay centered and just let the life flow through.

The trick will be to live the moment and not try to prepare for it -- as I did today.

It was a good day well shared.

Photo: Speaking at Saluté Ristorante on the Richmond marina. Only a small portion of the group can be seen, but the room was full and the audience receptive and easy to interact with.

Posted by Betty Reid Soskin at 6:45 PM No comments: