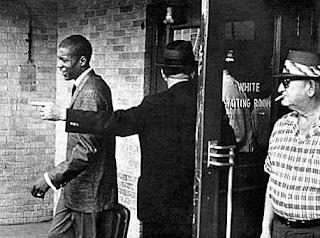 There are times when the world is moving too fast to record the process...

This is one such week. And it isn't due to my inability to keep up for reasons of inadequacy. It's because the rate of change and the need to pause long enough to allow for absorption demands it.

How does one separate the political from what are surely huge societal adjustments of the kind that may be life-altering? How can I write (without political advocacy) about how it felt as a black woman to watch a candidate for the presidency confront the nation around our most challenging national issue -- continuing cancerous racial inequality -- and to watch him do it without one scintilla of hatred? What can one say when to say anything that even hints of endorsement is forbidden by one's professional role? So -- I've chosen silence. At least until today when I'm confronted by the need to work through a work-related problem that brings it all front and center in a way that makes silence difficult if not impossible.

I'm still struggling with how best to talk about those feelings and about how they're effecting my day-to-day existence, but that may change. In the interim, I'm working through memories of a period that exemplifies a personal history of the World War II era -- a period of racial inequality that must be revisited if we're to grow beyond it. And that historic speech -- if nothing else -- challenged us to enter into a long-deferred national conversation. But maybe there is an opportunity to engage others without advocacy if I can do so with sensitivity to where the boundaries lie.

All this is to say that we're in the beginnings of planning this year's 2nd Annual World World II Home Front Festival here in Richmond, California. Last year it was a rousing success, but there were some bumpy places for me, personally. Meeting blank stares when I tried to remind others what life was like for me -- and others like me. It was like being a skunk at the garden party.

When the Saturday night USO dance was being planned by the Chamber of Commerce last year, I tried to remind the committee that black servicemen and women were barred from those activities. That it would be no surprise if there were no black folks attending the commemorative dance. And so it was. Very few black or brown faces were in the festive red-white-and-blue crowd that night last fall, and those few who did attend probably were too young to remember or to be carrying any of the scars of that rejection. And the white veterans; couples who came back to remember and to celebrate, were unaware and/or were untouched by that history and could continue to be so because the reminders were deliberately missing from the collective mindset of the party goers as well as to the planners.

This year we'll use folk and union music traditions through which to tell the stories of the home front. Great! Right? New problems: both movements -- though rich in Americana -- were almost exclusively White. African Americans sang from a different songbook, and our music was used only as raw material from which to form "American" music, and held no intrinsic value of its own.

The unions were segregated and the music that grew from those movements was coming from Woody Guthrie, Pete Seeger and the Weavers, Peter, Paul and Mary, et al, (good folks all) but it would be decades before black artists would be allowed to cross over into the mainstream of arts and culture. Then Josh White, Odetta, Oscar Brown, Jr., and the great blues singers began to be recognized and appreciated -- but only in a special category called "race" music. I know because we got our start in the music business at the end of the war, in June of 1945, when we opened Reid's Records in Berkeley, oriented to a black clientele.

So -- we bring together the Folk Music Society of San Francisco and the Union Chorus to this year's festival to reunite and celebrate. We've made the initial contact and it looks likely. It will be exciting. Some of those singers and musicians are veterans of the home front story -- shipyards, aircraft plants, munitions, Red Cross workers, USO volunteers, and some are Rosies. But how do we address the old race questions without breaking with our obligation to not advocate politically? Or, do we seize the opportunity to finally re-visit that period and those issues in a healing and inclusive way in order to get beyond them and in a way that exercises the commitment to community outreach which falls well within the bounds of my job description? If this sounds convoluted, it's because my pathway through this is still unclear.

Finding the balances will be critical.

Typing out the words is helpful. I'll begin by asking for a meeting with those music groups so that we can explore the questions and invite them to help in the planning. It will be our chance to open the conversation and re-visit that historic period together. We can recognize that there were Americans of every race trying to get it right then -- just as there are now. That we can find ways to honor those efforts by sharing the hopes and dreams of a generation sharing the mission to save the world -- even while denying its collective humanity and need for one another.

And we can do it through the music of the period ... music that nurtured a generation and -- in time -- effected the direction of our progress. Despite whatever feeble efforts that were made by many, it would take another two decades to bring us to where we are now. There is much work still to be done. It may be that the opening of a new conversation on race relations is finally underway due to the candor and wisdom of a new generation of leadership.


Photo: Can you place yourself in the shoes of the man being ushered out of this "Whites only" waiting room? Do you wonder whether his smile is from subservience -- or is it fear? By their dress one must assume the photo depicts a period during our lifetimes. Would not anger be the appropriate response to the situation -- even if it's delayed a generation or two?
Posted by Betty Reid Soskin at 11:45 AM No comments: