December 13th has been named as the day when Stanley Williams, San Quentin Death Row inmate, is slated to be put to death by the State of California. His plea for clemency was denied by the Supreme Court and he is awaiting word from the governor; his last possible chance for commutation of the death sentence. The crime for which he is being executed is for the killing of four people -- crimes that he strongly denies having committed. What he does not refute is the fact that he was the co-founder of one of South Central L.A's most notorious gangs, the Crips.

There has been ample evidence of a trial that was rigged; a jury that was not of his peers; evidence tampering; inadequate legal representation; jailhouse snitches from those trading his life for lessening of their own prison time, etc. There has even been the recanting of one of those who is now serving time again in a Nevada prison, and wanting Stan's forgiveness for having lied for his own gain. But that's not what disturbs me and is making sleep difficult to fall into ... .

Some years ago while working for the state, I was invited to be a member of the entourage of Ms. Winnie Mandela who flew from South Africa for a five-day visit to San Quentin to see Williams and to bring visibility to his case for clemency. This would be my first visit to the inside of the prison, having been at the outer gates with others at earlier protests of the death penalty from time to time. This time would be different. I had no idea what I'd find, but there were moments prior to that day when doubt that I could do this at all rose to throb in my throat and shallow my breathing. On the day of the visit, I found myself driving across the bridge -- inadvertently past the exit and into San Rafael -- then having to turn around and drive back to the entrance. A sure sign of subconscious resistance.

The visiting party was an interesting one. In the party were two members of the press, John Gioia, a county supervisor; Barbara Cottman Becnel, the extraordinary woman who is William's co-author in a series of children's books and his long time defender (featured in the film "Redemption" starring Jamie Fox); Ms. Mandela, a pastor of note, and Betty, representing a member of the State Assembly.

Having only experienced Death Row through television, I was expecting to be standing behind bulletproof glass with a few of the more notable visitors speaking to the prisoner through a wall telephone. I was not prepared for this large noisy visiting room shared by many denim-clad Death Row prisoners seated around large tables with their families, including a number of children. Stanley Williams spoke with us freely. Everyone looked so ordinary. Stan was a warm and very unlikely murderer, and that was in striking contradiction to the truth as we'd known it.

We'd been screened carefully for contraband before entering. We'd been warned prior to coming not to bring in writing implements, for women not to wear bras that contained underwires, had removed everything for close inspection including shoes in the reception center -- no cameras or tape recorders. Preparation for entering had taken hours since -- oddly enough -- it was Ms. Mandela who couldn't get past the metal detectors despite an embarrassing numbers of tries, and eventually a call to Sacramento to the attorney general's office when she became furious and threatened to leave without completing her mission. The problem took more than an hour to resolve and never revealed the source. I'd arrived earlier than the rest of the party and sailed right through; but I'm sure that it was because the African American guard greeted me upon arrival with, "...well hello Ms. Reid! Get any new releases in this week?" He was a Reid's Records customer, though I hadn't recognized him. In our community this carried more caché than my state creditials.

Stan has since been nominated four times for the Nobel Peace Prize and once for Literature. His work with children through the books he's written to discourage gang violence has been life-changing for kids around the world. His website (that he's never seen) is maintained by Barbara Becnel and has had hundreds of thousands of hits. He has been the leader of a movement to bring peace to innercity streets, a movement that started in South Central but has spread across the nation and the world.

All of this may seem an eleventh hour conversion and a cynical ploy to avoid the death penalty, but not if you've met Stan Williams or read his writings. I have. Barbara and I are friends. I've been with her when she presented him by telephone to groups working for a moratorium on the death penalty -- in hushed rooms where his gentle voice was miked to speak to the issues without guile or with no sign of desperation or a wish to extend his lifetime in a prison cell unnecessarily. One has the feeling in listening to him that his wish is to allow himself to be used in the interest of savings others. His native brilliance is apparent and stunning to witness when he speaks. His use of language is terse -- to the point, and honed from years of having to say it all in small bursts of time on collect calls to Barbara from the prison.

How can this happen? In a similar way to that which transformed the life of President Nelson Mandela. Of William's 26 years on Death Row, 7 were spent in solitary confinement. Seven years without human contact re-creates the mind, I believe. The young man who was sentenced early in life was now someone else; a phenomenon replicable in monastic life where it's entered into voluntarily. I don't believe we have any notion of what it means to have only one's self to interact with for such an extended period. Is it possible that we become the instrument of our own redemption under such conditions? I believe that it was out of that experience that peace was attained and out of which his books began to emerge from bits of paper passed through to Barbara and eventually published for children everywhere to help them to escape the tragedy of his own life gone so terribly wrong.

I recall in those moments in that place that the music, the poetry in me, always rose from my dark places. That a kind of touching bottom brought a reactive lunge upward and a kind of epiphany that burst forth in some creative form that was not otherwise available to me. Could this be universally true?

On December 8th there will be the start of a weeklong vigil at the gates of San Quentin. I'll join with my friend, Unitarian-Universalist minister, Rev. Paul Sawyer of Pasadena , Mike Farrell, Tom Hayden, and others in the Movement for a Moratorium, hopefully. We'll start with a prison-gate-church-service at ten o'clock and will remain a constant presence (in teams) until midnight of the 13th -- unless there is a stay -- and a promise of a re-visiting of the issue of a moratorium on the death penalty. It's time to join with attorneys, pacifists, concerned young people, compassionate policy-makers, the Innocence Project, former gang members, and any one or group that has begun to see the imbalances and injustices of a system that's lost its way.

The irony of living in a time where the indiscriminate slaughter of so many civilian men, women, and children in Iraq -- not to mention our own young men and women in a war so few of us can understand or justify -- is inescapable. That we can compartmentalize in ways that allow for such cruelty thoroughly confuses the concept of "Intelligent Design" and reinforces my belief in a random universe. It seems far more likely that the concentration of corporate power has derailed democracy and ushered in the frightening possibility that Man has created God in his own image, an image tragically wanting and manipulated by the powerful at will.

That "The State" can create and maintain a Guantanamo or Abu Graib, a California Youth Authority where recently 4 kids have died and where the need for reform is denied by those who have to power to change it. Where claim is now made that my country has endorsed torture as a part of its arsenal of war; and that we've formed a network of places, worldwide, where anyone can be held endlessly without charge and tortured at will. That this has become a nation that justifies the right to kill in our names under the guise of capital punishment, or war, or in defense of ..., or eventually -- because our oil is under their country!

Upon leaving the visiting room that day -- Stan reached out for a hug. Without hesitating for an instant, I hugged back. Intuition had taken over. In that moment, he lost the stigma of pariah and I'd allowed him to become a very human being whose fate I cared deeply about.

I need to rent "Redemption" at the video store before December 8th. It's been long time since that experience. I need to renew the truths that prevailed that day at San Quentin -- when all doubt vanished and I knew. 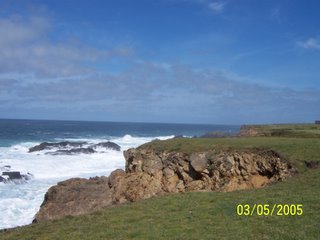 Worried about my soul?