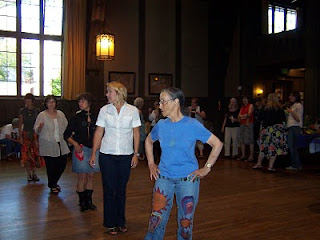 When life begins to close in and becomes threatening to the psyche ... it's time to go line-dancing!

There was not only the close-up stuff, like Dorian's slow recovery and this-week's-move in to my small apartment, but then there was the Flotilla attack off Gaza that involved some local folks; continuing BP oil gushing uncontrollably in the Gulf;  up-coming California Primaries for which I've not yet studied the ballot; the sudden explosion of my supermarket checkout line celebrity with its unexpected never-quite-ready-for-it fame; all that stuff that makes up my days now ... so why not? 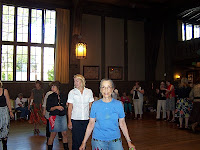 Dion's birthday party brought together old friends and acquaintances for an afternoon of noshing on great food -- a genuine caller who was the only male in the room at the Hillside Club -- and what fun!

Maybe ya gotta have whimsy to balance off what is often a far too purposeful life.

Except that I found that I'm hard-wired for the Electric Slide and never quite got the hang of the Texas two-step.  Maybe if they'd had some James Brown on the turntable, or a little Aretha or Marvin Gaye ...
Posted by Betty Reid Soskin at 10:07 PM No comments: