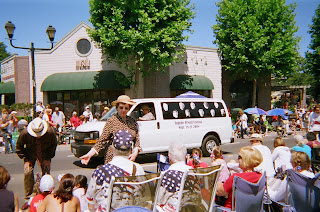 Save the dates for the Eugene O'Neill Festival - September 19th, 20th and 21st in Danville, California!

Attended the second meeting of the planning group for this year's event, and, despite earlier misgivings -- find myself really excited about being involved in working this through. I'm more convinced than ever that -- by working sensitively with all of the elements -- we can use "All God's Chillun Got Wings" to extend the intent of the great Mr. Eugene O'Neill to bring deeper understanding to the questions the play raises.

I am also firmly convinced that the American public is ready for these conversations and that I want to be in the vanguard of the next series of social changes that lie ahead. My work with the National Park Service has placed me front row and center as we continue to write history, this time through the arts.

It will be a challenge, but one that is manageable, I think. Last night's meeting reinforced my positive feelings about the intent of the director and a growing trust in his ability to match the courage shown by both O'Neill and Robeson. Haven't met any of the cast, but by extending the trust to those chosen by this director -- and the well-intentioned planning group -- I'm ready to watch our play unfold over the next several weeks as we wend our way through what could well be a thorny list of questions and challenges. If we're to grow, that may be an essential part of the process.

Today I meet with another planning group, this time with those working on the Reunion program for the 2nd Annual Home Front Festival here in Richmond. It will be a celebration of the life of folk singer, Faith Petric, who is this year's poster girl. She's a 92 year-old Rosie who helped to build the ships in the Hoboken shipyards during WWII. She is still performing! This year's Festival will not only be a celebration of the women of WWII and the homefront workers, but will also be a bringing together of the folk music world to pay honor to this venerable woman who was a friend and contemporary of Pete Seeger, Woody Guthrie, Josh White, et al, and a chance to bring together as many as possible of those whom she hasn't outlived for a day of remembrance.

We're working with the members of her 42 year-old San Francisco Folk Music Club, members of the Labor Chorus, individual performers with whom Faith has sung over the many years -- for the sole purpose of adding to her already illustrious career by this added recognition of her gifts.

These will be several weeks of intense involvement in the arts; with many lessons I hope to be capable of absorbing -- without too much stress on those around me.

But there are real signs that I'm willing to let go and move on:

Yesterday -- on an impulse -- I walked to the desk of a young aspiring singer who works within earshot of my desk. She's a member of the staff of the Redevelopment Agency (we share space in city hall). She is African American, both beautiful and talented.

At my desk I'd been listening on my I-POD to some of the music that my son, Bob, had added to my list of possibilities for the Home Front festival scheduled for the weekend of October 5th. Preceding those written and performed for Faith at her 90th birthday party were 7 songs of mine that were written long a 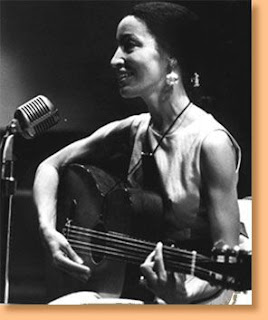 go. I heard my own songs in a new way. This young woman with the thin voice was good. but the songs were better. I'd taken out copyrights on all of them; had performed them on occasion; but had never gotten around to publishing.

At one point I could hear Jacqueline at her desk as I walked toward the conference room. On a whim -- returned to my desk and picked up my I-POD and took it to her. "These are lovely songs. They're not being sung and should be." The words spilled out easily. "Would you like to add them to your songbook?" I watched as she listened. She was obviously stunned. She wiped her eyes at one point. I realized that in that moment she'd forgotten that this was the voice and the music of 40 years ago. "You should be singing them yourself, Betty!" Obviously not. That voice was stilled long ago by competing interests and an unwillingness to enter a more public life. Those callouses that one works to develop for playing the guitar had disappeared eons ago during some other lifetime. But even more importantly, that Betty had grown into yet another and the music now -- though abandoned in time -- may now have a life of its own.

So saying, I finally gave the songs away to move out into the world -- separate from their creator.

Jacqueline will use them well -- and I'll watch from the wings as I move on into yet another life no longer encumbered by the myths of what might have been... .


Photo: Top photo taken at last year's Eugene O'Neill Festival. Lower photo was taken by a news photographer during performance at a concert in Cleveland, Ohio, sometime in the late Sixties.