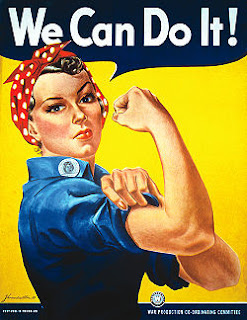 Participated two weeks ago in the master planning process of the most recently designated urban national park ... .

Due to the hard work of California Congressman George Miller and the due diligence of a small National Park Service (NPS) team named only a year or so ago, the work of choosing the historic components that best tell the story of the homefront support system created by Henry J. Kaiser is officially underway.

Not sure what you know about the work of the National Park Service, but in at least one of its aspects -- that of park creation -- the American story is told through carefully-selected still-standing "structures." For instance, there is the restoration of the New England mills which produced fabrics that clothed us (until recent times of off-shore manufacturing); the current work of restoring the encampments where the Japanese immigrants Japanese/Americans were interned in that shameful period; and San Francisco's Presidio, with buildings that were constructed before the Civil War are still standing; to name only a few.

Was involved many years ago in the morphing of Fort Mason as one of the symbols of war into what is now a most interesting symbol of peace -- "swords to plowshares" -- where the arts are celebrated in innovative ways through all of its disciplines.

That leads us to this recent 2-day session of meetings to begin the master planning for Rosie The Riveter WWII/Home Front National Historical Park.   Tthe park includes an impressive woman-designed (Cheryl Barton and Susan Schwartzenberg), memorial to the women who served in that war here on the home front. There is Kaiser Shipyard #3 where that horde of migrant workers was brought together to build the ships;, two giant Whirley Cranes (we'll talk about that later), the original Kaiser field hospital, the genesis of the national HMO movement and preventive healthcare; and the Maritime Child Development Centers with 24-hour-a-day childcare that later became the site of a community college, and much more and served as the progenitor for Head Start. All structures that will "tell the story."

Many are now too young to recall, but shortly after the first bombs dropped at Pearl Harbor, Henry J. Kaiser, whose company had by that time completed the construction of Grand Coulee and Hoover Dams, opened the first of the war-created shipyards in Richmond, California; commandeered the railroads and -- in an endless stream of railroad cars -- brought in thousands upon thousands of sharecroppers and tenant farmers from Texas, Oklahoma, Arkansas, and Louisiana, and Mississippi  to build the victory ships that would supply arms and the stuff of life to the Pacific war theater. In a mass production model called prefabrication borrowed from Henry Ford, he brought people with little or no skills and of all races to become the formidable shipbuilders in the race to win the war against world domination by Fascist forces and stop the Axis in its tracks.

You must remember the context in which all this occurred: These were Blacks and Whites who at the time were not even sharing drinking fountains back in their places of origin. These were men and women who had never shared tools nor been in the same work environments. This was during the time when women were expected to stay at home to bear and rear the children. Yet -- despite inexperience and in many instances -- little or no formal education or prior training -- they completed and launched a ship every five days (747 over the course of the war), working night and day, ceaselessly. A monumental feat deserving of a national park to honor their effort. These were the extraordinary ordinary folks whose contribution to saving of the world will now be celebrated.

This planning session was the second I've participated in, having been named to the team by my office and as liaison from the city as well. There were perhaps 35-40 experts in the room; marine engineers, city planners, architects , historians, developers, National Park Service staff, writers, scientists, and me. My name tag said (not field representative, nor city liaison, nor did it honor the fact that I represent the State of California which holds liens on much of the land that lies beneath the Ford Assembly Plant; an important component of the new national park).  My name tag said simply, "former Rosie." It was an innocent sin of omission. I'm aware that -- in this younger group I'm serving as a kind of icon of an era and valued for my "historic" value. But I was not to be allowed peer status. And, yes, I brought their attention to this oversight when the proper moment came.

Learned during this early planning session how history becomes revisionist.

At the war's end, and within only a few weeks (under prior agreement with the government), every one of the temporary war housing structures where African Americans had been assigned, were demolished. The discovery that -- along with the rest -- Ku Klux Klansmen had arrived and the occasional cross-burning was not uncommon. The "auxiliary"(segregated) union hall (Boilermakers A-36) was razed, in the expectation I suppose, that now that the war was over those black folks would just go home. Not so. Didn't happen. You can't go home again, at least not to a hostile south and dead end living. You put down your tools, picked up whatever it would take to earn your way, and went on living -- in place.

In the new plan before us, the planning team was taken on a bus tour of the buildings that will be restored as elements in the park. They're on scattered sites throughout the western part of the city. One of two housing complexes that has been preserved, Atchison and Nystrom Villages.  They consist of modest bungalows, mostly duplexes and triplexes that were constructed "for white workers only." In many cases, the descendants of those workers still inhabit those homes. They're now historic landmarks and are on the national registry as such.

Since we're "telling the story of America through structures," how in the world do we tell this one? And in looking around the room, I realized that it was only a question for me. It held no meaning for anyone else.

No one in the room realizes that the story of Rosie the Riveter is a white woman's story.  I, and women of color will not be represented by this park as proposed.  Many of the sites names in the legislation I remember as places of racial segregation -- and as such -- they may be enshrined by a generation that has forgotten that history.

There is no way to explain the continuing presence of the 40% African American presence in this city's population without including their role in World War II. There continues to be a custodial attitude toward this segment of the population, with outsiders unaware of the miracle of those folks who dropped their hoes and picked up welding torches to help to save the world from the enemy. Even their grandchildren have lost the sense of mission and worthiness without those markers of achievement and "membership" in the effort to save the world.

And, yes, I did tell them. And, I have no idea what they'll do with the information, but I did feel a sense of having communicated those thoughts effectively to well-meaning professionals who didn't know what in hell to do the information.

I was a Rosie who never saw a ship during that time. The little union hall that I worked in as a young file clerk has long since been destroyed.  It was far enough away from the shipyards to have gotten lost over time as memories dimmed. My memory has either censored all relationship to the period, or I never felt a part of the war effort at all. I did not arrive west at the start of the war. Having grown up in the Bay Area, I was an anomaly.

My family had come from New Orleans at the end of World War I to join my grandfather who preceded them. My maternal ancestors had originally immigrated to the Americas in 1631 from France by way of Nova Scotia and Maryland. My father's people arrived before the Louisiana Purchase, also from France. And on both sides, were the ancestors who had come in the early 1600s as chattel, in the Middle Passage, untraceable through the dark curtain of slavery.

I am a part of the story now being told , and I will do everything that I can to restore the missing chapters ... but the challenge is daunting, indeed.
Posted by Betty Reid Soskin at 11:49 AM