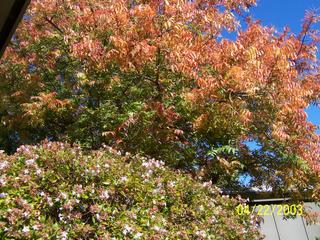 This morning there was the unmistakable scent of decaying leaves in the air, surely not as heavily sweet as it will be after the first rain, but evident nonetheless. The changing of the seasons -- even when as subtle as it is here on the west coast -- still signals the time of abbreviated days and lengthening periods of darkness. I love autumn.

Last night the moon was the thinnest of slivers against a sky of deep velvet blackness. Here on the edge of the Pacific, a blanket of fog often separates us from moon and stars, and makes the sky appear very close to Earth. At times, that separation disappears completely, and it feels as if the world has collapsed in upon itself, and I feel claustrophobic. At other times (especially when I'm walking) I enjoy seeing the world in the shapshots that magnifies subjects in the foreground by separating even a single leafless tree to stand alone -- stark... black ... framed against the all-enveloping mist. But that only happens on days when I'm at peace with myself.

Then I remember that one October, years ago, when I experienced my first New England "Color!" Driving from Hartford to New York ... seeing the brilliance caught in our headlights as we wended our way down the turnpike ... even at eleven o'clock at night ... magical! And beyond the roadside color display, stars! Millions and millions of stars! I recall wondering just how long it had been since I'd noticed the stars....?

I was in Hartford to spend two weeks working with music director Paul Neves, a fine Boston jazz pianist, in preparation to auditioning for Max Gordon at the Village Vanguard. But that was another Betty, and it was sometime during the late 70's when the I was flirting with fame, before I closed that door for all time... .And, no, that decision wasn't nearly as painful as one might imagine. Other doors opened as if on cue. The time had come to slip into the next "Betty," and I did.

Today, I turned on my car radio -- listening to the horrors being lived out this day in Southern California. Fire! Homes gone! People dying. Nature unleashed, and at its most destructive. All of those human beings now without places to lay their heads tonight, and exposed to elements in ways too frightening to dwell on for more than a few minutes at a time...

This is "Fall color" of a most frightening kind. Seeing the stars because there was no longer a roof over you to shut them out ... I can't imagine what that must be like. My heart goes out to families who are blessed by the numbness that descends -- when one needs protection against an unacceptable reality. I've never experienced that -- at least not all in an instant. It does seem, though, that there have been periods in my life when hints of horror and the possibility of death came in shards of agony, ragged edges, torn places, but never actual.

Like the period in 1987 when the three leading men in my life, my first husband, Mel, and the father of our children; Bill, the man I chose to share life with as a fully mature women; and my father, Dorson, who had become very dear to me over the last quarter of his life. All three died over a brief three month period in 1987. I was devastated. Up to that time I'd been defined by the men in my life. Had no idea who I was or could be without them.

One morning a few months later I woke as if coming out of a fog. Right behind the grief was emancipation! How could I have known? Here I was moving into another period of becoming at a time when I might least have expected it... .