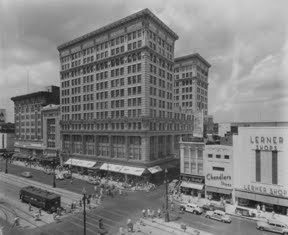 introduced me to segregation in ways that probably color my attitude today.

On an oppressively humid day Aunt Corinne took me to visit Maison Blanche, a grand department store on Canal Street. As a lively teenager will do, as we passed a display of ladies hats, I popped one onto my head and headed for the mirror when an obviously irate sales clerk dashed over to demand payment from my aunt. I learned in this embarrassing way that colored people were not allowed to try on garments. If you did so, you'd just better be sure that it was what you wanted. In my western innocence, I simply hadn't known. No one had thought to warn me beforehand.

This was my first experience with sitting in the back of the bus and not by choice. Only, in this case it was a streetcar. Though called "the screen," it was no more than a bar that said "Colored Only" that was the length of a double seat and perhaps five or six inches high. It slipped into slots that were embedded at the back of seats and could be moved back if the front of the bus got too full and more white folks seats were needed. If the back of the bus was crowded, it was standing room only. This I had been told before leaving home so it was demeaning, but of relatively little interest to me.

Attended a matinee at a downtown movie house with cousins; another curious day. The theaters were usually built on street corners with a box office on the main street for whites and another (smaller one) for coloreds on the side street. The whites paid the normal ticket price of a few dollars and sat on the downstairs main floor. Coloreds walked up stairs and occupied the balcony, but paid only a quarter for the admission.

I noticed during the intermission that there was a trailer being run for the upcoming Fourth of July picnic being held at the racetrack with a general admission of $1.00 for adults, 50 cents for children, and 10 cents for colored people. That was a shocker for me, but there's a streak of humor in it that I still appreciate. The picnic was also segregated with different entry points and congregating areas for blacks and whites.

On the other hand, that summer was my first experience with being in a world where everyone looked pretty much like me and my family, and where -- except for trips downtown -- I never saw white people. The druggist, the doctors, the dentists, the teachers and principals, the shop and barkeepers, everyone -- was colored. That was new for me. With few exceptions, the professional classes in the California were universally white. Was this then, another of those places where oppression had some hidden advantages? Since one couldn't go to general hospitals or to a doctor, and since there were no schools for you except those run by the Catholic nuns, you had to create your own. There were even white and colored sections in crypts and burial grounds. But here, too were the beginnings of my sense of those millions shades of gray. There was not the equivalent of my uncle Dr. Raleigh Coker back home, graduate of Meharry Institute (for Negroes only), nor my several cousins who were teaching in the local schools. Or my legendary Aunt Alice who alone created the first school for colored children in St. James Parish and was celebrated in her community as a heroine of her time. At home, one of mother's friends, Ms. Ruth Acty was later honored as the first African American teacher hired by the Berkeley schools, but that was still years into the future.

But the crowning blow that summer was my first visit to Corpus Christi Church, the church my grandfather and father built and where the family had knelt together for many years. I had seen many photographs of it among Dad's things since I was very young. That building was the source of such great pride to him. This, above all, was "our" church -- much more so than St. Bernard in Oakland -- where I'd received First Holy Communion and that my family had attended regularly.

Corpus Christi was segregated. Coloreds were seated on the left and right sides of the aisles and the middle section was reserved for whites. This was the birthplace of a diminishing connection with organized religion that eventually progressed to Atheism. For some years it was possible to see this as a human rather than a God failing, but in time the disillusionment was complete.

Saw another anomaly that still puzzles me. There was no segregation in housing patterns, everyone lived everywhere. My grandparents lived in a duplex that was shared with an Italian family. Their children played together, but only in the back yard -- never on street-side -- according to my father. They all attended the same parish church, Corpus Christi.

A strange summer, most of which defied understanding -- and still does.
Posted by Betty Reid Soskin at 9:03 AM