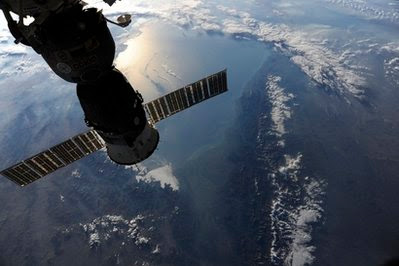 There's no way to remain in the past ...

while ramming into the future by way of the Mars probe, completed so successfully last night. The magic of it all is staggering!

Here I was lying in my bed in a condo on the Pacific Coast of the USA watching -- not only the anxiously-waiting scientists at NASA headquarters -- but simultaneously connected with the anticipated arrival of the new Mars lander any second! Could hardly sleep as I marveled at just how far civilization has come in some respects -- just during my lifetime -- but at how horribly behind we are in others (brutal genocidal wars rage on!).

How can it be that this morning we're seeing this monumental scientific feat sharing equal sound bites with Brittany Spear's aborted marriage in Las Vegas, and a new baby-in-the-crocodile-pen abuse in Australia? Our sense of scale has been seriously distorted, right? Michael Jackson, Scott Peterson, Kobe Bryant, Martha Stewart, and a-flight-through-the-tail-of-a-meteor-while-being-expertly-photographed and a Mars landing with another planned for in three weeks -- all being given equal time CNN!

How on earth will my grandchildren ever be able to gain any sense of wonder with this kind of bombardment? How on earth will this grandmother ever be able to adjust to this rate of change and the anomalies it's producing? I have new respect for the experience of Papa George who was born before the automobile (1870's) made its appearance and died (at 96) after having flown by jet to visit his old home in New Orleans. This should be comforting in that it proves that the human animal is capable of absorbing such extremes without disintegrating. However, I'm not all that certain that Planet Earth has the same resilience. After all, there are those melting glaciers, horrific mudslides, wildfire, earthquakes, disappearing rain forests, holes in the ozone layer, and avalanches to consider ... .

Makes this Atheist long for some divine presence that might monitor this planetary dilemma. It's more and more apparent that the world has totally lost its way. There are too many developments on too many fronts for us mere mortals to keep up with. The voice of science -- bravely leading the way into the future -- is being drowned out by those of the arms manufacturers and corporate raiders, and it's terrifying!

Can't help but think that Albert Einstein, Steven Hawking, and Ray Bradbury were closer to the answers than Billy Graham or Pat Robertson ever were. Maybe the race for survival is between Ariel Sharon, George Dubya, Tony Blair and the world's scientists. Makes one feel very small, indeed.

Would that there really could be some Heavenly Auditor/Monitor up there somewhere with the power to pull us back from the edge in time ... but to wish for such answers is surely as foolish as the wishes and prayers of those who are filling the pews each Sunday waiting for the Rapture.

Maybe we've had just about as much free choice as we can deal with, Lord!

Go get the Evil Doers! (smile)
Posted by Betty Reid Soskin at 10:33 AM