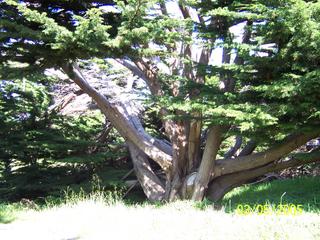 Home again from a restful weekend at Mendocino... .

The contrasts in my world have always been somewhat extreme, but never more so that at this moment. Driving in a warm springlike rain into the Anderson valley with the two-lane road pretty much all to myself was a departure from the crowded freeways that I weave through day after day in the auto-polluted cities. Seeing bright pink blossoms of trees meant to bear and not simply ornamental as they are here just outside my door in Richmond. Fields of what I've always thought of as Scotch Broom but am told is a similar but highly invasive plant that is threatening to crowd out native flora all along the coastal plains and valleys, but whose sharp yellows today make up for the varying greys of the rain-laden skies. The drive up Highway 128 -- through the redwood forest of the Navarro river was fragrant and greening for spring... beautiful! But the promised heavier rains would come soon, surely ... .

Last week I stood shoulder to shoulder at the retirement party for Judy Hart, the superintendent of the new national Park. It was a gathering of Richmond's inner circle -- the mayor and city council, reps from state and federal office holders, good friends and still-living "Rosies" (I believe there were at least three of us present. Still have problems relating to being named among that group.) The reception and dinner were held at Salute (should be an accent over the "e" but can't find it now), one of my favorite restaurants -- and one of the few in the area appropriate for more formal events. A lovely place on the marina sitting comfortably amid sailboats of Richmond's more affluent and with a fine cuisine and a story that needs telling:

Ten years ago this month, "Memby," a stunningly beautiful young woman from Ethiopia came to this country as an immigrant and single mother. She spoke no English. She found a job in this lovely resturant doing whatever needed doing and learning the business as she tended tables and greeted guests. She placed her young son in a Catholic school then worked 3 jobs simultaneously to support them both. About 18 months ago -- after working incredibly hard and saving every penny -- she bought the place, lock, stock, and cuisine. Without changing the menu or the fine service that had served the previous owners so well for so long, she's managed to do the impossible. Memby's is a story worth telling. She's has not yet been celebrated as is warranted by her performance.

Were I a member of the quaint village of historic Mendocino, I would know nothing about Memby, I suppose. There are so many like stories in Richmond, stories that I've been privileged to discover over the years. These heroes and heroines people my life and enrich my days. They provide the balances so needed when the headlines scream out the sensational day-to-day deaths and near-deaths. The sensational feeds upon itself and it all begins to make up the tension that I feel drop away as I hit that place in the road -- just as I leave the last trees of the redwoods -- where Highway 18 merges with Coast Highway #1 -- where the Navarro meets the ocean. I can feel the fear drop away and my jaw loosen as I free the bite that I had no idea I was holding ... .

This time I turned off Porgy and Bess by the Houston Opera Company. Those familiar sounds had filled the car all the way from Cloverdale -- pressed the buttons that opened the window on the driver's side -- and filled the car with the scent of decaying leaves and salt sea spray. Made note of the fact that "Eden" in Mendocino was but 4 and a half cd's from Richmond, and that Porgy and Bess was not appropriate here. Vivaldi would have been a better and Ellington or Billy Strayhorne even better than that. On the way home I'd plan my listening experience more carefully. Recalled in the listening to Gershwin's masterpiece that the last time I'd seen this opera I'd found it racist for the first time. Written by someone outside the black experience -- and despite the beautiful score -- it was a reminder of a time when the stereotypical was the order of the day, and losing myself in the arias (Summertime and Bess, you is my woman now" no longer worked well enough to erase the pain we were then covering less than effectively. I hated Crown but saw Porgy as pitiful and less than heroic ... as I wanted my black icons to be. No Martin Kings here, only the Cab Calloways.

Wonder if anyone is thinking seriously of writing the score for the story of Tupac Shakur or Diallo or Nelson Mandela? Wonder what the differences might be? Maybe somewhere behind prison walls there is an opera being carved out against a wall with some carefully-hidden and fiercely-guarded prison-made spoon handle ...

With such a high ratio of blacks incarcerated, it is probable that a fair number are from the population of the visual and performing artists. Wouldn't I love to know what those figures are ... and how to reach them.

But that's not what I wanted to talk about today, but time has past far too quickly and there is catching up to do ... more later.

Photo: One of the cedars that flanks the driveway and forms the gateway of "The Timbers," the only home that I've ever known that rates a name of its own. It is most fitting. it's situated on a bluff 80 feet from the edge of the ocean and is one of the most beautiful places I've ever known.
Posted by Betty Reid Soskin at 12:38 PM