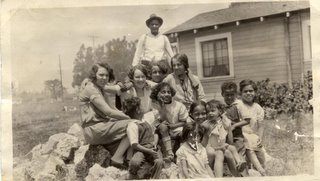 Contrasts can be dizzying if one thinks about it too much ...

Woke this morning to the sound of Scott Simon's voice on NPR introducing a piece on New Orleans by one of the staff whose home was/is there. It was a fine piece with appropriate sounds in the background and the proper mix of humor, irony, and pathos for what exists no more. The images from my architect friend, Tom Butt's (not my special friend, Tom) report on his recent professional visit to Louisiana and the many photos of desolation that he included blew open memories that I thought had dimmed out long ago. Hadn't realized how touched I was by those images.

The replay of the hurricane of my childhood -- the one that uprooted my family and deposited us in Oakland, California, in 1927 has come into sharp focus again. I was six -- old enough to have the trauma renewed but more in feelings than in fact. Each time I read of the plight of those dispersed out into strange environments (like Creoles in Utah) something stirs deep inside that I can't quite get at ... .

Comments by this morning's reporter continue to resonate -- "... in a city that was only recently 80% black, that percentage has been reversed. Everywhere I look there are white people." And, "...the hotels and inns that remain are no longer filled with the visitors who used to come to share our culture, but with FEMA personnel and workers and agents." Though the voice was that of a white woman, there was obviously pain in it for what once was -- and hope that somehow it will all be restored. She sounded both nostalgic and resigned to the unknown future of her/our city.

My family never returned except for occasional visits to see Mammá, yet much of the culture is still embedded in my psyche -- at least through my own generation. Sadly, little if any of that was transmitted to our children. My parents mourned the loss, and it was in the mourning that their love of New Orleans and the music and the food and the superstitions and zest for life was given to us. It was fragile. I didn't know. Should have taken better care of it.

When looking through old fading family photos since Katrina, I'm discovering a freshening of memories. Something beyond nostalgia ... a kinship with today's scattered souls who may never return -- but who may not find today's world any more kindly than it was when my parents left. In many cases (especially since we witnessed the lack of caring over those endless days when corpses rotted away in gutters) there's strong evidence that our fate -- even in a time of brutal segregation -- we were luckier than those now dispersed into unknown futures. It is yet to be acknowledged that at least 5000 people are still unaccounted for. There has been no final count announced. I suspect that there will never be.

I also think of all those little Bettys caught in the aftermath of Katrina -- warehoused in strange cities -- lost to the vagaries of ghetto life, uprooted from poor schools in the south and tossed into poorer ones in the north -- with resources withheld or skimmed off by corruption in a system not yet free of the blindness of racism -- damned by low expectations and consigned to the least of all there is. Such thoughts demand that I participate in the saving of the children -- all children -- and in the saving -- save myself.

But as it was with my own life -- change will come. That it will be as profound a change as I've lived cannot be seen at this point. Change is irresistable; controlling the shape of it is unfortunately a collective thing -- demanding implementation by us all. Individuals have little power over the form it takes or the speed by which it moves. Yet, that little girl who arrived with hurricane-devastated parents in 1927 survived. There are remnants of a culture still influencing my life. The Catholicism and the French patois were casualities, but the jazz and the deep pride of being and the gumbo and jambalaya and the joie de vivre lives on, and for that I'm grateful. Perhaps that's why I cling to the uniqueness of my Creole (black) ancestry -- it's always given more than it took away. And I'm still adding to it -- though often despite a strong resistance to the constant threat of expropriation by the dominant culture.

Tonight we'll have dinner at Tadich's in San Francisco's financial district -- then on to the San Francisco Opera. The performance will be Ludwig van Beethoven's "Fidelio." Though not hard-wired for either symphony or opera, I find myself more and more open to listening keenly in the hope of making connections to the store of music of a kind that I feel rather than hear. I'm discovering that -- from time to time -- some universal is tapped into -- and that spiritual knowing kicks in ... and the music and the fine arts and the dance strikes some universal something and I'm on the inside -- with the composer or the artist or the dancer -- and there's the feeling of home. The feeling is rare -- but having felt it at all and at times emulating it -- the possibility keeps me ever searching in galleries and on concert stages and dance pavillions ... but mostly in the music of Duke Ellington, Miles Davis, Billie Holiday, and Shirley Horn, still. But at times now, also in the strains of Sibelius, Borodin, or Mozart or a Quaker choir singing "Tis a gift to be simple ...". Maybe the connection has to be made with something already within me, and after so many years -- what's in me grows richer and more complex with each day.

What's in me -- the starting place -- was/is my black Creole history and culture.