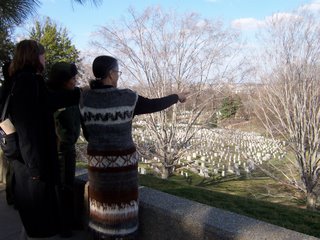 Life is moving so fast that I'm breathless just trying to absorb it all without imploding ... .

Events of today quickly subsume events of yesterday -- not to mention the day-before-yesterday.

Since arriving home from the east coast there have been parties and continuing honors that are beginning to make me feel like an over-ripe rock star!

On Saturday after our Thursday (3/23) flight home I was driven to downtown Oakland to -- what was supposed to be an errand to IKEA but -- in fact was a surprise party planned and executed by son, David. It had obviously been weeks in the making. I was still so caught up in all that had happened -- it wasn't until we drove into the downtown area, into the 400 block of 14th Street near Broadway, that it dawned on me that we were heading for Geoffrey's. This is a family-owned gathering place where more and more ceremonial events are being hosted. Geoffrey's is a very special place, but in most recent times it has served as the site of memorial services for those we'd loved and lost. Maybe now we could exorcise the place with a celebration of the living. Me!

David had been busy while Kokee and I explored Washington -- grandchildren, cousins, and friends (I've now outlived all of the aunts and uncles) had gathered together for an afternoon of performances and presentations. There were brief speeches by both sons, Bob and David; a touching tribute by Dorrie who had been dressed for the party in beautiful African garb complete with fancy head wrap; a traditional African dance performed by a dear young friend; a violin solo by beautiful cousin, Joan Lewis, -- jazz player who's traveled internationally performing with noted musicians; a song by Bob (despite a bad cold); and touching tributes by old friends. There was Kokee's halting and close-to-tears words of confirmation that our shared adventure had reinforced our love. This was followed by a feast provided by cousin Geoffrey Pete served on brightly-colored placemats David had ordered from the National Women's History Project catalogue that displayed photos of the ten named honorees. He'd purchased a 15-minute DVD produced by the NWHP in honor of celebrated women over the past century. We'd viewed it as a part of the program at the Autrey ceremonies. It was his way of giving context to what had happened to me -- and it moved me to tears. Whatever the world has bestowed -- this recognition in the eyes of my sons and my family was the most touching and reaffirming of all that had happened over the past weeks.

Being the source of such pride was a rare privilege, indeed, and brought with it new meaning to all that had happened. I'd only that week experienced the feeling of having had a role in bringing all of the ancestors into my century and soon I would have a role in passing the baton to those who will follow. This strong sense of being a part of a continuum of change might well become the compelling new force in what is left of life to be lived. The newfound feelings of worthiness were reinforced in that room as I experienced the pride that I felt in myself mirrored in the eyes of those I love. That kind of congruence is rare. I suspect that this is a one time thrill. But maybe once is enough if properly savored and not allowed to be distorted into arrogance or over-confidence. This could be where the wheels come off the wagon if I begin to lose my sense of balance and begin to glide without effort instead of continuing to reach and stretch into the unknown future ... .

I must not allow this to become my obituary. There is need to continue to project myself into time as before. There are still symbolic white towels to drape over those imaginary gateposts of the world -- and future "Dr. Hymel's" to be searched out and supported in their work of saving humanity -- and the children I'll leave behind.

Photo: Martha Lee and granddaughter, Kokee, sharing the sweeping panorama of countless grave markers and the J. F. Kennedy family graves at Arlington Cemetery. The view from this spot takes in the Jefferson Memorial, the Lincoln Memorial, and the Washington in the distance. Wish it could show the feelings that such a view of the nation's symbolic past are evoked at such a moment. Only a respectful silence can tell that story ... .