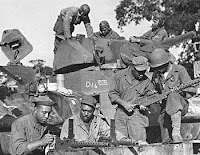 I really need to stop reading these studies ... or to be more selective in who I allow to fiddle around with my head ...

Everywhere I look these days -- especially while driving along the gritty streets of the Iron Triangle on my way to my office cubicle -- I see a cruel confirmation of the WWII past that I'm exploring in my work. Case in point:

I learned from a talk by a (white) San Francisco State researcher at a Black History Month event at Geoffrey's Inner Circle last week that; "...though the GI bill guaranteed a brighter future for returning servicemen and women, it meant little to veterans of color." He continued, "...the bill gave a jump start to whites, but by a clever device the legislature wrote it to be administered locally and not federally." This meant that local banks had the power through their loan programs to determine that blacks would only be allowed to purchase property (homes) in industry-agreed-upon "black catch basins" and that loan costs would discourage home ownership. The difference in loan costs between blacks and whites persists to this day, as do interest and insurance rates. With access to employment seriously limited except for government agencies (mostly the U.S. Postal Service), qualifying for loans was extremely difficult. Racial covenants -- born of the wartime population boom facilitated by fears of the huge migration of blacks from southern states to answer the call for homefront workers -- were used by the banking industry to contain and limit home ownership to whites only.

I remember with some bitterness that -- in 1950 -- the Walnut Creek building site for the home our family would share for the next 20 years, was only made possible by having our friend Dorothy Wilson (white attorney) the wife of African American attorney Lionel Wilson make the purchase for us. At that time Lionel would undoubtedly have been in the same position as we; though he later was appointed a judge of the Superior court and, eventually, would serve as the first black mayor of the City of Oakland.

The same was true in the wake of WWII with regard to higher education. Where whites had a universe of schools from which to choose, blacks were still barred from many educational institutions throughout the South, GI bill or not. There was only one black medical school in the nation, as I recall -- and that was Meharry -- from which my uncle, Dr. Raleigh Coker, graduated in the early teens of the last century. It would be another twenty or more years before James Meridith would knock at the doors of "Ole Miss," or before the defiance of the courageous 9 black students -- and the year-long standoff at Central High in Little Rock.

The legacy of deprivation is still clearly seen here in Richmond where I live and work, and throughout much of the country where the misguided former University of California Regent Ward Connerly and his battles against Affirmative Action has lowered accessibility to higher learning for African Americans here and elsewhere. The result is that the seething black anger has become internalized and suicidal since few remember its genesis, so have no way to use it constructively. You can't expect those who have been educationally deprived to be able to separate out what is personal from what is systemic, so are doomed to self-doubt and a sense of justified rejection. How sad!

Dr. Martin Luther King, Malcolm X, et al, focussed the rage and gave it voice that created community and a means for collectively dealing with it. The nation has gone deaf on the issues that consume us, and few any longer bear any sense of responsibility or accountability. The vacant looks in the eyes of alienated kids I see aimlessly gathering together on street corners are frightening -- not because they're evil -- but because their pain and disaffection is so clearly marked in their faces, in their music, and in their poetry. The distance between our worlds is now so great that I have no faith in the notion that it will be bridged in my declining lifetime.

Why do I care at my age? It's because my grandchildren, too, are standing across that abyss and I can't help them to navigate the ocean of alienation that it's taken me over 80 years to traverse. Given the prospects of the world for the creation of peace and environmental justice, there may not be enough time for the next generation to reverse what earlier generations have wrought.

And -- are there any others who still can remember ...?