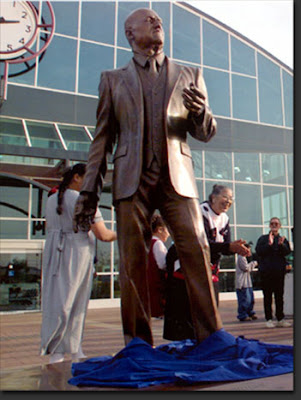 There is no question. Just located an interview online, "Conversations with Ron Dellums" which has this paragraph:

"...C.L. Dellums, as you know, joined with A. Philip Randolph. These were guys that came out of the twenties, these were the old left-wing guys in the twenties. The came together (Ed. at the International Hotel?) and organized the first African American trade union in the history of America, the Brotherhood of Sleeping Car Porters. These were guys who placed a great premium on the spoken word as a way of organizing, to be impressive when they challenged people. You know, people thought A. Philip Randolph and C.L. Dellums and these guys were Harvard graduates, because they developed an affect that challenged the system to deal with them intellectually, at an eyeball-to-eyeball level."

Since Dellums was at that time leading the Northern California NAACP, that work of organizing must have happened here in the Bay Area. Where would they have met but in Richmond at a site that housed the very workers they were attempting to organize?

It has been a fruitful day, thus far. However, there's still the vacuuming to do and the mountain of trash (oh how the junk mail doth accumulate when you're not looking!) to tote out to the dumpster, but I'll feel much better at Ethel's funeral services on Tuesday knowing that the work is proceeding and that hope is not lost.

Still need help, though, everybody ... .

Photo: Taken at the unveiling of the statue of C.L. Dellums that stands at the recently restored 16th Street Southern Pacific station in Oakland, California.