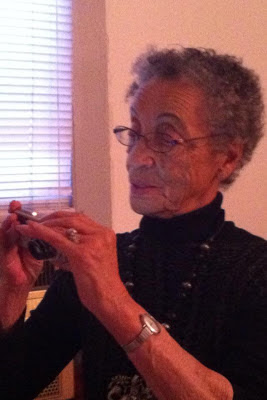 Musings on the 2012 WWII International Conference in New Orleans ... .

Thinking about that audience of WWII historians, authors, veterans, and descendants of that generation.  I've mentioned that I seem to have outlived my rage without losing my passion, and never has that been more true than now.

In the dark of evening -- long after we'd left Arnaud's restaurant in the French Quarter where the presenters had been wined and dined with elegance by our hosts -- the sorting out was well underway. Seated to my right was author historian, Nigel Hamilton, who wrote the definitive book on JFK: Reckless Youth and the authorized biography on Field Marshall Bernard Montgomery, among others.  To my left, my co-presenter earlier in the evening, Jerry E. Strahan, author of Andrew Jackson Higgins and the Boats that Won World War II.
I'd just been photographed standing with the grandson of General Omar Bradley, a tall distinguished kindly man of grace and humility.  These were the giants of that history; all men of great accomplishments.  I felt honored to be among them.  I've rarely experienced greater respect.  I was treated as an equal in every way.

I've mentioned that I was the only person of color among the 500 participants in the 2012 International Conference of the WWII Museum.  But the reasons were  obvious when I'd had time to give it some thought.  These were the descendants of WWII at a time -- 3 years before the desegregation of the Armed Forces by executive order from President Harry Truman.  That would not happen until 1948.  Separation of the races was clearly their reality, and it could hardly have been otherwise, given the seriously-flawed social system under which we were living at the time.  No one knows better than I of the importance of telling that story as it was lived in order to provide a baseline against which to measure how far we've come over the 70 years since.  Any revising of that history would rob us of the truth of what has been endured over time, and of the gains we've made in the process of making the much-needed corrections.  By re-visiting those years with eyes wide open, we can find the hope needed to complete the transformation to true democracy over the years ahead.

When I started to speak on Friday evening, the first sentences that came to mind as I looked out at those white faces in the audience were, "... what gets remembered is a function of who's in the room doing the remembering." I repeated those words to provide emphasis -- as the truth of that experience rose to consciousness.

At the time  -- early in development of Rosie the Riveter/World War II Home Front Historical National Park --  I had to give up any notion that my story was omitted from history through some grand conspiracy.  My stories had simply slipped from memory through neglect.  There were no villains around the table of planners in the early stages of park development.  I was the only person of color in those days, acting as a field representative for a member of the State Assembly, and the only one with a memory bank that included so much of that forgotten history.  I recall how shocked I was upon realizing that we were about to create a national park that would enshrine sites of segregation, and that no one else was aware of it,  or had any reason to be.

It should be no surprise that these good folks of the WWII Conference had no awareness of the need to include the descendants of the Tuskegee Airmen, the highly-decorated 442nd Americans of Japanese descent -- in some cases drafted to serve out of relocation camps to fight the bloody battles in Italy; the heroic All Black tank battalion, the 761st, that fought so valiantly under General George Patton in the invasion of Germany.  Were they included, that room would have looked very different.  But whatever places of honor that have been established to honor their service are still separated by the racial barrier from the mainstream -- as represented by the WWII Museum.

... and I saw no villains in that ballroom, either.  Just an unknowing of the need to present the complexity of those times, and that by sacrificing that complexity, they've omitted a substantial portion of "Truth."