A day with the Richmond Police Force turned out to be a day of confusion that ended magnificently!

I'd heard nothing from our Chief Magnus.  He's not turned up at any of my programs over the weeks since he'd presented his invitation for me to participate in his staff training, despite my insistence.

I'd checked with our superintendent to see whether anyone from our NPS staff would be sharing the experience with me, and that he'd had a follow-up conversations to confirm the Chief's invitation.  He'd assured me that they'd had a phone conversation, and that everything was in place.

On the day before, on February 24th as I was watching the six o'clock local news, I heard a segment referring to a "Day of training in the City of Richmond that featured Dr. Lori Fridell and which had police chiefs from nearby cities ...", and suddenly I panicked.  Had I not written the right date on my calendar?  Was the workshop on Tuesday instead of Wednesday -- the 25th?  Had I missed the commitment altogether by some error?

After an almost sleepless night I woke to face the day that might be an embarrassment for me and for our park.  What on earth could have happened ... ?

By nine o'clock I was at my desk hoping to solve the mystery -- but the answers were not forthcoming.  Sent out emails to my supervisors and to our superintendent, who knew as little as I did.  Nothing would clarify the situation short of driving to the Richmond Police Department for a talk with Chief Magnus.  That would mean facing the fact of my embarrassment at being a no-show for yesterday's training.  Met with a staff person who could answer my questions, but he seemed unsure of the needed answer that would solve my problem.

"Chief Magnus is in Southern California today, and is not available."  Something had come up and He'd apparently delegated the entire event to someone else, and there was no follow-up on the original arrangements.  I envisioned that, once he'd left town, his officers told themselves, "we don't need no history lessons; I was born and raised in Richmond, no one can tell me about this town!"  My heart sank as I waited for the day to unfold.

And, no, I hadn't made an error in listing the date.  The workshop had been broken into a two-day experience, and Dr. Fridell had done her training on Tuesday.  And, yes, my workshop (on Richmond's history) was scheduled for Wednesday, and, no it would not be happening in the cavernous Craneway of the Ford Building, but 24 sergeants would be arriving at the Visitor Education Center of our park at 2:15 today (Wednesday). 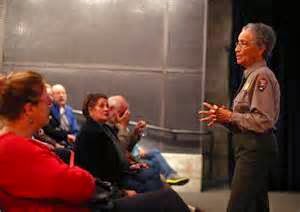 Of course, no one had thought to update us about the changes as they occurred, and it was necessary to immediately go to the Visitor Center to confirm that it was available for the training to occur at the time they planned to arrive.

Promptly at 2:15 they arrived in plain clothes (for which I was grateful), and -- together with several members of the public -- I gave my usual three-times-a-week theater program complete with Q&A.

They were rapt, engaged, and eager for the history and clearly open to the experience.

I'm looking forward to their return in the near future, with friends and relatives in tow, to share the exciting Visitor Center experience.

... and I think I've figured out just why our presentations seem to be so well-received.  I believe that the fact that most professional trainers in racial tolerance tend to deal with the subject behaviorally while we use the material in a causative way.  This is a new thought and I'm not sure how to better explain it at this point, but over time I'll better understand the concept and will let you know where it takes me.

It's challenging but also exciting whenever I have this feeling of breaking new ground in the understanding of my world ... .