enjoyed a fine dinner at a local Cantonese restaurant with a cousin and dear friend, Doug Allen. We've forged a deep and warm cross-generational friendship that seems to enrich us both each time we connect.

Doug is one of many writers in our family. He is a reporter and columnist for the Berkeley Daily Planet at the moment, but in the past has written for the San Jose Mercury News, the Metro Papers, the East Bay Express, and more. He has served as literary critic for a number of publishers from time to time, and is deep in the writing of his first novel. We talked about that a bit last night and I will be one of his readers, before he submits his manuscript to a publisher.

He brought along a copy of a document that I've been wanting to have for my family archives for ages. I'd seen it about a year ago at a family reunion and coveted it ever since.

It's a letter written in response to an inquiry from (cousin) Ivy Y. Lewis, another of our family elders. At that time Ivy was compiling a wealth of materials left by her father (and my first husband's uncle):

Dear Mrs. Lewis:
By California law, each California County has issued a biennial publication, the Great Register of Voters. You may be interested to know that Edward West Parker is listed in the 1872 Great Register of San Francisco County Voters as having registered to vote on April 15, 1870, the very first day of registration under the 15th amendment to the U.S. Constitution. He listed his occupation as a boot maker; his birthplace as Virginia; and his residence as 786 Harrison Street. He gave his age as 54 on that date of registration.

You may be interested to know that my card catalog was published a few months ago in three volumes. Copies have been presented both to the East Bay Negro Historical Society, Oakland, and the African American Historical Society, San Francisco, in case you may wish to see it.

Some years ago, Mr. Williams L. Patterson told me that he had seen several copies of the San Francisco Elevator (1860s - 1880s) which were then held by local relatives of his. It occurs to me that these copies should be carefully indexed for the historical information contained in them. If you learn of the whereabouts of these papers and can secure permission to index them, I certainly would be most interested in so doing.

If you can imagine -- after looking at the dates on these yellowed pages -- that this was not very long after the State of California was chartered and entered the union, it may give you some sense of how hard it was for some of us to relate to the great consternation that accompanied the passage of the Voter's Rights legislation some 60 years later!

After returning from dinner, Doug and I talked late into the night. He'd brought along another photograph that showed about 18 lovely, animated young women in their early twenties. It was taken at some social event of a club I once belonged to, as did his mother, Maybelle. It was known as "The Women" (Inspired by the old classic film). It reminded me of something I wrote about a few days ago -- about my world prior to World War II -- and the social context in which we lived. There I was in this photograph standing at the far right end of the group, and for a moment I recognized (viscerally) the young Betty of that first oral history interview. This was she, and she seems very far away now. So much life has been lived. So many bridges crossed. So much pain endured. And so much joy, overall... .

During our conversation, I realized that our childhood and youth had been not unlike that of any other immigrant groups. The Portuguese, Italians, Irish, etc., whose families had come from other forms of oppression, from other corners of the world. Many of our families had escaped the pain of slavery and Jim Crow by moving west, and many of us were the first generation to grow up in a place where racial segregation didn't yet have a firm footing. Like some of our offspring today who take civil rights for granted for the most part, we reveled in our youth with as much pride and abandon as any other youngsters of any other ethnic background. 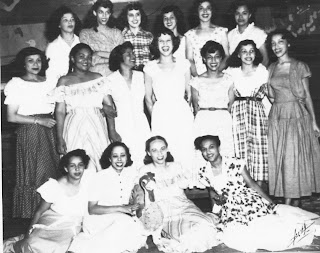 The children of that pioneer Black population might have made a fascinating study of the kind of world African Americans would have produced for themselves, were the chains of racial prejudice not used to suppress and deny the natural upward spiral enjoyed by most other groups of immigrants in the general population. This may have been an important opportunity missed. We've begun to die off now, and there aren't too many of my generation still around to work with, but what few there are should by all means be recorded for the sake of history. And, like many other pre-World War II Californians, we too are waiting for all you strangers to go home! (Said with a smile, of course.)

...Which reminds me to stop now and place a call to an old friend, Jackie, whom I've allowed to get away -- in the busyness of everyday life. I'll arrange a time this afternoon to visit. I'll take along my photo of "The Women," and watch her face light up!