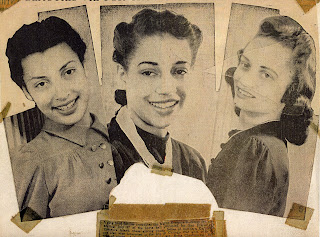 Thinking about that 20-24 year-old Betty who was daunted by that interview and that's beginning to become clearer.

That period in history was a time when our world got completely turned on its head and evolved into a ten-year period of redefinition -- not only for me -- but for all of my relatives and friends. You might imagine what it would have been like for those of us who had lived in the pre-segregation West. While we'd grown up with full knowledge of the curse of racial bigotry, we lived above it all, in what might be called affinity groups (affinity communities, I suppose) in much the same way that Italian-Americans, Portuguese-Americans, Irish-Americans, etc., lived their lives. We shared cultural celebrations in our various neighborhoods, but had our own African-American Creole-based rich culture to identify with.

There were clearly differences, but I certainly had the feeling that we were together by choice, and -- though our parents were -- for the large part -- the service workers of the times, and fully aware of "their place," my generation enjoyed a rich social life well controlled by our parents, who planned our activities and guarded us from harm to the extent that they could.

There were coming out parties (quite formal), tennis tournaments that brought out the opposing teams from Southern California, beauty contests and picnics and skating parties. Public events such as big band concerts brought everyone out to dance to Duke Ellington, Jimmy Lunceford, Jazz Festivals. As a young teen I traveled to San Pablo Park in Berkeley with Papa George to watch the traveling colored baseball teams play to packed stands. The campuses (San Jose State, U.C. Berkeley, San Francisco State, Sacramento State) all had very active fraternities and sororities that added to our academic and social lives.

At that time there were no more than about 17,000 African Americans in the entire northern part of the state, including Sacramento, with several families as far away as Guinda and Marysville to the North, and Seaside and San Mateo to the south and west of us. We were spread throughout the East Bay and San Francisco, with many families having arrived in California around the turn of the century.

When World War II began and the great migration brought over 100,000 southern whites and blacks into the Bay Area almost overnight, we were simply buried under.  Everything changed. "Gentlemen's Agreements" with respect to housing became formalized, and Jim Crow restrictions -- once only covert -- became the prevailing systems of operation.

To that point, other than the time when my high school drama teacher -- after a fine reading I'd done for the part of Maria in Maxwell Anderson's Winterset -- kept me after class to explain why she couldn't give me the part because I'd have to play against a white boy ... I'd really not seen much real racial prejudice. Besides, I'd been too busy having a great time with my own friends, separate and apart from my (white) school life.

Small wonder that 20 year-old Betty didn't have the words to describe life in those years. The transitions were dramatic, and the changing context in which our lives were being lived was overwhelming. Someone once told me - much later in life -- that it was really hard to feel superior to folks who simply refused to be inferior. That would pretty well have described most of us. We were a pretty confident bunch, many of whom grew up to be the community leaders in the decades following the war. But someone had shuffled the deck, and we found ourselves co-existing and in competition with educated and accomplished African Americans from all over the country and the world who had followed in the wake of the great Black migration of war workers from southern states..

This was long before the Civil Rights struggles of the Sixties, and the advent of Dr. King. And a new ethos was evolving in the black community, and many of us were hearing the "Negro National Anthem" for the very first time. It was a tumultuous period of change for us all, and in many ways, the radical changes were costly. They also brought a new reality that replaced all that had gone before.

It was in 1950, five years after the war's end, that we built our home in Walnut Creek, and tried to return to an earlier and less complicated time. That was not to be. It had never occurred to us that the term "middle-class African Americans" exists only in the minds of middle-class African Americans! A nigger is a nigger is a nigger in the minds of whites. And we became the "first black family on the block" of middle-class and upper-middle-class whites who had moved into the valley to escape the scourge of the black migration. Little did we know how much pain that would bring. And my husband's family had come to California during the Civil War. Our children were 4th generation Californians.