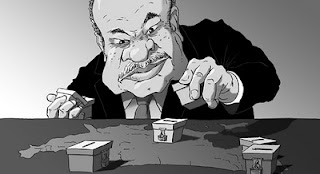 Regent Ward Connerly's controversial initiative that would remove race as a factor and move us all toward his hoped-for "colorblind society." I'm hopeful that it will be roundly defeated, but am certain that confusion reigns among people of good will. Like many state propositions, this one borrows heavily from the language of civil rights, and will surely lead many down the primrose path of deception.

My physical appearance is racially ambiguous. One might assume that there would be some relief in finally being able to opt out of "checking the boxes" of identification. Did that years ago. Upon entering the workforce at the university back in the Seventies, I made the decision to just check all those little boxes, including "other" and let it go at that. When the interviewer asked about it I just told her to take a look at me ... she laughed!

It was probably at that point that I decided that race -- at some point in successive racial intermarriages -- becomes a political choice. And, in time, I made that political choice unconditionally. I am African American. When I choose to break it down, I can identify Spanish (Islenos), French, Choctaw, Shoshone, Creole, English, African on both sides. Almost any African American would find such mixtures in their backgrounds, with few exceptions. It just proves that we come from a long line of people who loved enough to cross a lot of unimportant lines of separation. No big deal.

Through my marriage, my children added to that mix, German, Jewish (their paternal grandmother, Reba Whitelaw Reid, wasn't too sure since she was a foundling from New York); Seminole; and David's wife and their children's mother is from the Philippines. His four children moved those "lines of separation" even farther out than before.

I remember that I was told by the Womens' Health Initiative (longevity study) that African Americans were less likely to suffer from osteoporosis than whites. For just a minute there it felt comforting. Then I laughed when a crazy thought crossed my mind, "...wonder if my genes know?"

Back to Prop. 54: Do you recall in the recent past when it was acknowledged far and wide that African Americans were the largest minority group in the general population? That was before there was a critical policy decision just before the last census, to allow those of us of mixed races to so specify. Clever ploy, that. At that time there was such a thing as "the black vote.

Where I had earlier refused to be classified out of sheer stubbornness, now I could see clearly the underlying strategy. (I wonder if Ward Connerly picked that up?)

Only a few months after the census was taken, it was publicly announced far and wide that the Black population was now the second largest minority group in the nation. Surprise, surprise! We had been surpassed by the Latinos!

We were the same people. If anything, under the former "one drop rule" our numbers were growing exponentially. In fact, our population was exploding -- and someone had surely noticed and worked out a way to deal with it. We lost significant political power in the process.

Regent Connerly joined the game, perhaps in innocence. Perhaps by design. Perhaps what we have here is a simple case of paranoia on my part. Maybe ... .

Anyway, in the way that history has of repeating its lessons, another song comes to mind.
It was written during the stormy Sixties when I was being tossed between worlds -- Black and White -- active nationally in the Black Revolution while living in white suburbia in California with all of the trappings of the "good life." I was experiencing being not quite black enough in one world, and not quite white enough in the other. After a period of feeling as if I were nothing, I wrote this song as testimony to the fact that I was really everything.

To Each of Me

To each of me
to love within the reach of me
and if this love could teach to me
why each of me, in turn,
should torture so the soul of me
and tear apart the whole of me
within life's play -- each role of me
must speak to me
must learn

some answer to this planet's pain
my microcosmic world -- insane!
if only I could make you see
it's here to see -- just look at me
there is within me all of you
from distant lands, the whole of you
the dreams, the heart, the soul of you
if only you would see ...
that black and white are part of it
my brown is at the heart of it
and blending was the start of it
and someday it shall be
that blackness and the white of us
will be the day and night of us
and not the wrong or right of us
the weak or might of us

Having worked that through, I could then go back to being my black self in celebration of the uniqueness of being a one-of-a-kind person. Maybe it's all in being allowed to make one's own choices. Maybe identity can't be imposed from outside.