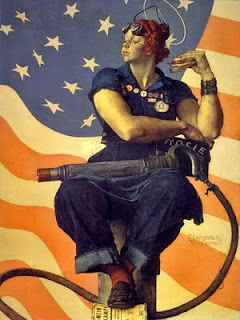 While it's quite true that I was feeling not quite earth-anchored, the reason was being withheld. Not sure why, except that -- as with so many aspects of my life -- the truth feels so "over-the-top."

Received a call at my office yesterday from Superintendent Judy Hart of the Rosie The Riveter WWII/Home Front National Historical Park (a mouthful!), announcing that there had been an award made by the Ford Motor Company to the park-in-progress and that someone was arriving from Washington, D.C., today from the National Park Service for that presentation. Also, someone else was flying up from Los Angeles from a public relations firm to "cover things." They will create public service announcements, an article for Working Mothers Magazine, something for Time Magazine, and, and, and, and, "...would you meet us at the memorial tomorrow for an interview and some photos?" And, we'll need you there from 1:40 until about 2:00!

It's clear that the event will be for the purpose of doing "Rosie as Icon," and that the articles will be about the generosity of the Ford Motor Company, of course. I'll be but a blip on the screen (just how much life can one crowd into a 20 minute interview, after all), and in some ways it's little more than an ego boost, and for a minute there I felt all of the giddiness that goes with such adventures.

Like the day that my live-in niece, Gail, came home from work to the McNeill-Leherer News Hour show in our den video-taping. We were already sure that the world bisected right through my kitchen. She quietly went about making tea for the crew as if there was nothing extraordinary going on at all.

I suspected that my neighbors (I was relatively new to community) -- from the number of media trucks lined up in front of our home -- and the amount of equipment moving in and out -- they probably figured that the nice little ole lady may be sheltering a drug lab and it would all turn up on the evening news. Not so, they were simply there to tape a segment about seniors online. I was only one of several members of Seniornet who were paving the way toward this new world of cyberspace communities. We were some of the earliest of those who helped to pioneer the brave new world.

When I reached home last night, the glow had worn off, I wasn't all that sure that I should be doing this at all. And there is a familiar ring to it ... .After all, there's African American Rosie, Mary "Peace" Head who still has her hard hat (which she now decorates with sequins and artificial flowers). Mary is a legitimate veteran of the home front wars and was a welder, I believe. She still attends parades and city festivals in full regalia whenever the occasions demand it.

I'm remembering now that -- when the HUAC (House UnAmerican Activities Committee) hearings were being conducted in San Francisco -- there were those disturbing scenes of protesters being hosed down the steps of the federal building. There were also the protests involving the razing of the old International Hotel. I was living in the suburbs at that time, far away from the black community and the field of action. But by that time I'd become a magnet for the more politically liberal members of the community and was looked to for explanations of what was happening beyond the hills that divided and protected us all from the action.

At first I used to puzzle at just why I was being asked to explain the actions of political situations I had no part in? In time it became clear that there was a legitimate role to play as a middle-class African American. I found a new meaning in middle-class black power. Since it was I who was being asked the questions, it seemed that there was a responsibility to get out there and find some answers; to act as a bridge in order to become a conduit for power. Consequently, I marched for Peoples' Park in Berkeley, stood vigil by slowing huge trucks with the Quakers at roadside in Port Chicago, demonstrated at the Oakland Induction Center, raised money for the Panther Party, and wrote and performed songs about it all.

No one, at that time, was going to give power to a black brotha standing on the corner with a brick in his hand, but I was experiencing a surge of power I would never have dreamed possible. I was a young wife and mother, attractive, bright and politically aware, and by that time had become an active member of the just-forming Unitarian-Universalist Church where I was surrounded by enthusiastic politically-wise social activists. It was safe to be "democratic" at me. The mayor of our town, Doug Page, was a member of our church, as were the head of the mental health association and my Kaiser pediatrician. I now felt cushioned against the pain that our family had endured only a short time before. It was up to me to get into my wood-paneled station-wagon, into some comfortable shoes, mentally fix my hard hat at the right angle, and become educated. And I did.

If it was I who lived in close proximity to those who made the rules, then it was I who needed to try to influence how those rules were going to be made. Maybe I'm still doing just that.

This afternoon I'll slip back into Thirty-Something Betty for a rationale for doing "Rosie." Just as there were no guarantees that anyone would have established cross-racial relationships strong enough to allow for the asking of the important questions of others in the Fifties -- this may still be true. I still speak truth as I know it, and to anyone who will ask. Maybe that's enough reason to accept the mantle. Maybe this is still a legitimate use of me. And maybe I'll never really know the why of it. And ... maybe it's time to just settle for the fun and the ego-satisfaction of it all.

Maybe the real question is just why the Mary Peace Heads of the world are still not being asked the important questions, directly? (And, yes, yesterday I did suggest that she might be more appropriate.) Guess we're just not quite there yet. And until then ... .
Posted by Betty Reid Soskin at 10:44 AM