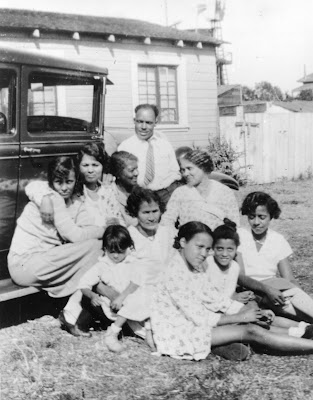 I could hardly be aware of race in the environment of New Orleans when everyone living "Downtown" (Creole section) would have been similar to everyone else. The reason that I didn't know the word "grandmother" was because the adults were bi-lingual and spoke Creole most of the time. And certainly this was the language of gossip.

Skin color was no big thing since Creole's come in all colors and types, and were the offspring of Blacks and Whites and lived in a kind of racial limbo, somewhere between -- both socially and racially. We were the romantic quadroons and octaroons of the times, and in many instances, the paramours of the upper-class white population, though that's surely less true in more recent times.

I do know that there was a regular crossing of the color line for better paying jobs. There was always some regret, but also a tacit agreement that no one would inform on family members who took that route. I'm still aware of cousins who married and disappeared into the greater population without a trace.

Some years ago my father's youngest brother, Melbourne, came to spend a few days with us.
My late husband's friend (and our best man) and his wife were invited to dinner to meet Uncle Mel, and as a gift presented me with a program from the San Francisco opera that they'd attended the night before. Listed in the cast of Madame Butterfly was Patricia Charbonnet, who played the lead. Leonard knew that this was my maiden name. He'd known my father and was fascinated by Creole culture. He and Bill videotaped Dad on the subject for many hours at the university, before the students in the Dept. Of Public Health and but two years before Dad's death. I said to Leonard at the time, "...but she's surely not related to us. She's obviously a member of the white branch of the family." Uncle Mel snorted but held his peace until they'd gone. Then he followed me out to the kitchen as I cleared the table and said, "...I wanna tell you something. Huey Long had a sayin' that you could feed all the real white folks in Louisiana offa one chicken!"

As I grew older and had visited our family home in New Orleans several times, and from stories Dad told to us, I was aware of the loose but very real connections between members of the white and black (Creole) families. My Dad's branch were millwrights, building contractors, craftsmen, and engineers, for the most part. The white side were lawyers, judges, and a state senator or two. This was reversed in later generations. One of my cousins (Creole) became a state senator representing the area that holds the famous French Quarter, and Bourbon Street. He's my contemporary but is no longer in the legislature. His father, Louis, (my father's second-to-youngest brother) was a building contractor and mortician (Charbonnet-Labat Funeral Home). By an agreement of many years, he and his (white) cousin, Paul Charbonnet, also a contractor, split the city in two. One handled all of the jobs on the east side of Canal Street and the other handled the west. Because (Creole) Uncle Louis and his building craftsmen brothers were not allowed to sign contracts in many cases in earlier times, Paul Charbonnet's name appears on many, as an enabler, obviously.

According to Dad, when one of his 7 wilder brothers got into trouble and got themselves arrested, (white) Judge Charbonnet would give a mild scolding and send them home to be properly reprimanded by their own father. Southern justice of a sort. 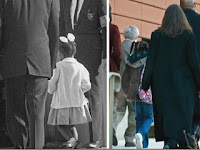 This was during the school busing wars after Brown vs. Board of Education ruling by the Supreme Court. I was watching the television news with mother. Here were hundreds of angry women pushing and shoving and screaming in protest at the integration of a school in New Orleans! This was unlike the protests in other parts of the country, where crowds were mixed but mainly male. These were largely females. Mom's comment at the time, "...I just don't see why they're having so much trouble integratin' the schools. We've had integrated bedrooms for years!" She was so right. Looked at from that angle, it was ironic. 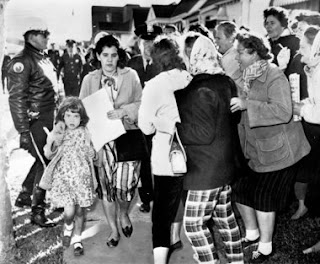 But the pain for those white mother's must have been deep. It would mean that both the white and colored children of their husbands would now be educated within the same institutions. Unthinkable! Inevitable. Fathers ordinarily recognized both families, a custom that came with them from France centuries before. Once the women of the aristocracy had given birth to as many children as she wishes to produce, or, if her health would not permit more, husbands took on a paramour and a second family that also bore his name. It's hard to think of women of color as birth control devices, but that may be the awful truth. And this may be simply another expression of white privilege that formed the basis of much of the racism we still must fight against, even in the year 2003.

Hope I'm not over-stating the case, but I don't believe so. At the level of Jung's theory of the Collective Unconscious, those women in Walnut Creek -- during the Fifties -- may have been responding to similar emotions in the viciousness that greeted us when we moved among them to build a home and raise our family. Makes about as much sense as anything else... .
Posted by Betty Reid Soskin at 2:10 PM