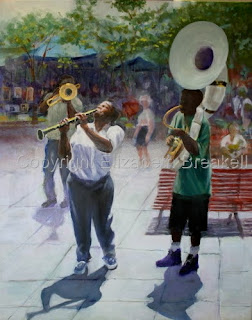 The last segment starts with "Of course... ." 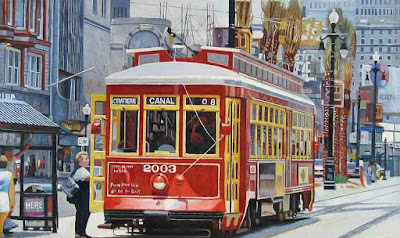 I was referring to the fact that I could find no way to write the way we children addressed my paternal grandmother.  Our godparents were referred to as "parent" but pronounced "pah-rehn." (Sorry but that's about as close as I can come to it.) My grandmother, Victoria Morales Charbonnet, was known as "me-mair" with little or no accent on the "r" and an accent over the "mair". At that time a patois of French was the language of our household, but English was the first language. It was common for adults to start out in one language and drift in and out of the other without warning. The kids were never included, since Creole was reserved as the means for transmitting gossip, grown-up to grown-up, as with most immigrant families.

Born in 1921 in Detroit, where my parents settled so that Dad could work in the auto industry. He was a millwright/engineer. My sister, Marjorie, was born there in 1918.  In 1924, my paternal grandfather died in New Orleans, and the family returned to live with Me-mair on Laperouse Street. She was a blind diabetic. She was also my caretaker and best friend and I remember her as talcum powder, waist-length dark hair, warm and wonderful fleshy upper-under-arms that felt like soft latex and formed and reformed in small hands... She took care of me by having me brush her long hair endlessly, and telling stories without end while mother ran the household. Most of her stories were told in a language I didn't understand, but when you're that age, who cares? It's the feelings that counts, and her message was always one of love.

I was almost always on hand when she and Father Kelly visited. He came to dinner several times a week, and though blind, Ma-Mair mended altar clothes and mother would launder them for him. But maybe that was simply his excuse. Don't know. But even at that early age, I can remember. She died some time after we'd moved to California. I could have been no more than 3-5 at that time of our friendship. Those were eventful years for me.

Younger sister, Lottie, was born when I was four years and two months, in November. We were living on Frenchman Street in a two-story house. On that day Uncle Doctor Raleigh Coker (husband of Aunt Emily) was the attending physician and various aunts were running around doing whatever it is that aunts do at such times. Me? I was out in the front yard sitting on one of those metal gizmos around which a garden hose is wound. It began to roll. I fell backwards and cracked my head on the sidewalk! The raised scar is still there, marking the day of my little sister's birth!

Shortly thereafter, in "big sister" style, I remember being allowed (for the first time) to walk all the way to Aunt Corinne's house on Touro Street (maybe two blocks?) -- unpaved with boardwalks. Boards that were put down by the city in summer to walk on and lifted in winter to burn in the stoves for heat. (Learned that later.)  I believe that would have been in the Seventh Ward,

Flashes of memory: Sitting on front porches on hot and humid summer evenings while the neighbors cruised by; men tipping hats and doing their "good evenin's" and women flirting, I suppose.  Sweet lost bread and jambalaya, red beans and rice; cream cheese that in no way resembles what goes by that name today, but a confection that came in a small round carton and had a sweet cream sauce over it; soft-shelled crabs and crawfish feeds with newspaper tablecloths; seafood gumbo, red "jumbo" -- soda water bought in pitchers brought from home. "Lagniappe!" the catch-phrase that always ended the trip to the corner store and guaranteed a piece of candy, a few crackers, peanuts, anything extra. Californians, sadly, knew nothing about that.

I remember disturbing pictures of Jesus everywhere; crucifixes on walls, an altar to the Virgin Mary. There was the musty smell while sleeping under mosquito netting, the chamber pot under the bed for nighttime use, the blue and white ceramic pitcher and bowl on the stand beside the bed. There was the scurrying of roaches when lamps were lit at night. The kerosene stove in the middle of the living room and lacy antimacassers on every piece of parlor furniture. There was the huge armoire in Ma-mair's bedroom that held heaven knows what, and the cedar chest at the foot of her bed that smelled of camphor when she drew extra blankets from it. There were candles, oil lamps in case of power failures, and incense in those tiny little pyramid shapes. I remember someone's Spanish shawl that was artfully draped over a chair, and that must have had some history.

Me-mair was Islenos. Her parents were Islenos who arrived in New York from Spain during the Spanish occupation of New Orleans. Her father, was a sea captain, I'm told, but I know little more about them, and most of that was learned only recently in tracing my family's history. As the French who settled in the New World came to be known as the Creoles, so the Spanish became the Islenos. We come from both, plus the Cajuns who are my mother's ancestors. We've never been able to trace the African lines as it disappears behind the curtain of slavery some time before 1827 when my mother's greatgrandmother, Celestine, was born (estimate).

Then there was the hurricane. The year was 1927 and I was 6 years-old. It was horrendous! I've been phobic about lightening and thunder all my life, and for good reason.

It happened on Good Friday (ominous religious implications, right?). It lasted for days, (it seems) and left me with images of my bed stacked on orange crates with water lapping just below. The house filled with the tide and everything lost. Dad building a square-bottomed boat and ferrying neighbor to and from wherever they needed to go for supplies, with Marjorie and a little boy cousin going along to bail water as they rowed.

Quiet desperate grownup conversations, and -- when the water receded -- worms everywhere and the smell I will never forget. It returns whenever I see footage of Florida in such times, of late. It was life-changing. It was traumatic -- impossible to forget.

The rice mill where Dad was working stood idle with machinery hopelessly rusted away. Everything was lost. Mother packed all that was left (three little girls and the crucifix, I believe) and headed west to join her father, Papa George. The western branch of the family now had three sons and my mother's younger sister who had followed him. Aunt Vivian was a student at the University of California at Berkeley. Uncles Fred, Lloyd, and Herman had all found work with the Southern Pacific Railroad and Papa George was a waiter at the then-exclusive Oakland Athletic Club. Dad would follow after things were settled back home.

I remember the train trip but mostly because poor little Marjorie had left home wearing a green taffeta dress that was a costume mother had made for some special occasion. It had disintegrated into green ribbons by the time we reached our destination.

Grandfather "Papa George" met us at the Sixteenth Street Station in Oakland, California, in his new Model T Ford (black, of course) with a rumble seat!

Life in California had begun... .
Posted by Betty Reid Soskin at 5:34 PM